DIACO SCORES FIRST IN OHL BUT WOLVES OUT RUN BULLDOGS 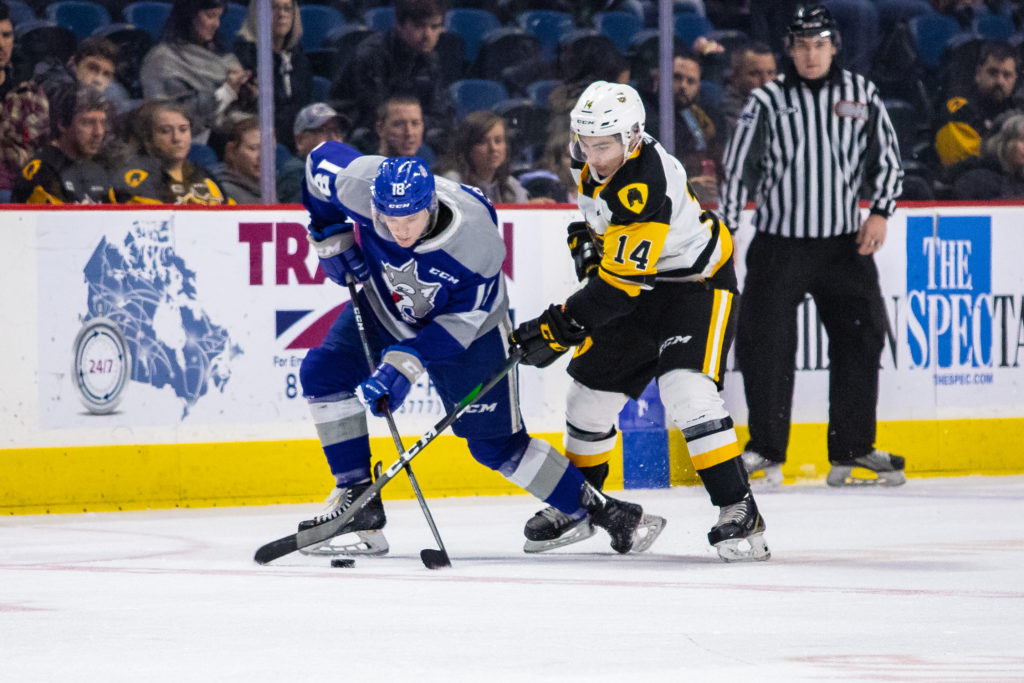 HAMILTON, ONTARIO. Rookie forward George Diaco recorded his first goal in the Ontario Hockey League while Arthur Kaliyev hit the 20-goal mark for the third time in his OHL career but the Sudbury Wolves would get 7 goals from 7 different goal scorers and a three point effort from Owen Gilhula to down the ‘Dogs.

The first period between the Hamilton Bulldogs and Sudbury Wolves was a track meet ok skill and speed with five total goals to begin the game. Owen Gilhula got the game started, streaking down the right wing and putting the puck into a tight space over Marco Costantini’s glove at 4:38. The Bulldogs would respond at 12:52 of the period as Logan Morrsion would work off an Adam Samuelsson check to take a feed from Avery Hayes and deposit his 7th of the year. The Wolves would take the next two in a row, Nolan Hutcheson’s net drive would be stopped but Blake Murray would jump on the rebound to give the Wolves a 2-1 lead before Quinton Byfield would record his 14th of the year at 17:01 putting one under the glove of Marco Costantini. Just 20 seconds later Jan Jenik would find Arthur Kaliyev for his 20th goal in just the team’s 19th game to send the game to the intermission with the Bulldogs trailing 3-2.

Sudbury would open the second by extending the lead back to two goals as David Levin would record his 8th of the season at 4:25 by finding a loose puck off a scramble in the slot and from the side of the net shovel the puck in. The Bulldogs would respond with a little bit of history at 9:15 as Bradey Johnson would find George Diaco who would make a move to the slot and beat Christian Purboo for his first goal in the Ontario Hockey League. Just after the midway point of the second period Owen Robinson would record his 5th of the season after a great save from Costantini to once again bubble the lead back to two for the Wolves who also held a 29-26 shot lead as the second period would come to a close.

The third period was all Wolves, after a solid opening five minutes of pressure from the Bulldogs a neutral zone breakdown allowed the Wolves to charge the Bulldogs zone and Owen Robinson would cash a second opportunity off the initial Gilhula shot for his 5th of the season, re-establishing a two goal lead that Sudbury wouldn’t relinquish the rest of the way. Hutcheson and Thompson would each tack on one more to give the Wolves a 7-3 victory with Christian Purboo stopping 29 of 32 for the win.

The Hamilton Bulldogs return to action on Sunday, November 10th for the second meeting of the season with the Niagara Ice Dogs at First Ontario Centre in a 2pm start.