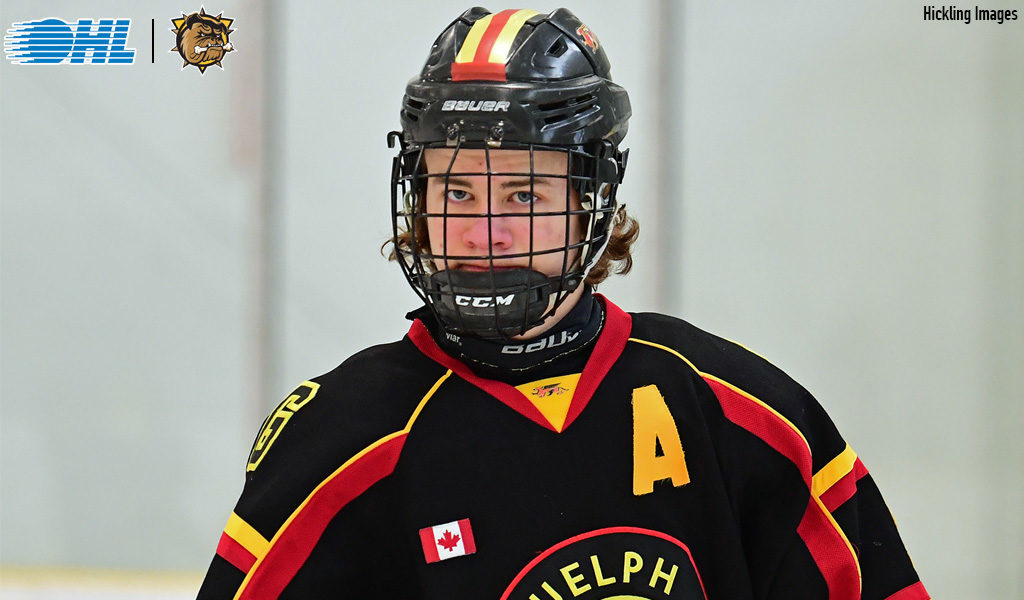 While in the middle of a playoff run that would see the Bulldogs win the 2018 OHL Championship, the team would also have work to do in the 2018 Ontario Hockey League Priority Selection Draft. In two seasons since the 2018 Draft, this class would set the Bulldogs franchise record in seeing 8 members play for the team, narrowly besting the 2015 class which would see 7 suit-up for the Dogs.

Beginning in the 1st round, with the 18th overall selection the Bulldogs would look to the Guelph Jr. Gryphons for leading scorer Logan Morrison who was coming off two seasons playing minor midget, having played up a year in 2016-17, where he recorded 110 points in 68 games including 32 goals & 42 assists for 74 points in just 33 games in his draft year, following with 6 points in 4 games in the 2018 OHL Cup. Morrison displayed incredible intelligence for the game that has since translated to the Ontario Hockey League where he has appeared in 106 games for the Bulldogs over the past two seasons, recording 79 points while being a staple among the Bulldogs top-6 forwards and on the top power-play unit. Morrison would set his personal highs in goals, assists & points in 2019-20 season with 23 goals & 22 assists for 45 points across 59 games, including scoring 2 hat-tricks. Morrison continues to improve his game in all facets and will continue to be a star of the Bulldogs franchise as he looks to be one of the leaders of the next OHL Championship team in Hamilton.

From the Mississauga Rebels, the Bulldogs would select defenceman Michael Renwick in the 2nd round, 34th overall. The smooth skating but gritty defender is a character both on and off the ice with a natural leadership ability that has shown in his time in Hamilton. Having scored 24 points in 33 games in his draft year, Renwick would draw tremendous praise for his ability in the defensive zone to bail his team out of trouble and turn transition to offense. In his rookie year with the Bulldogs, Renwick would be selected to play for Team Canada at the IIHF World U-17 Hockey Championship where he would appear in 5 games for Team White but see his season cut short on his return due to injury having appeared in 18 games. A healthy Renwick returned in the 2019-20 season and appeared in 59 games scoring 17 points while becoming a key member of an improving Bulldogs penalty kill. Perhaps in the highlight of his season, Renwick would score a highlight reel game winning goal against his hometown Mississauga Steelheads at the Paramount Fine Foods Centre, driving a slap shot off the back bar and sending his team into a frenzy celebrating the goal. Like Morrison, Renwick looks to be a key leader in the next Bulldogs Championship run.

Selected in the 2nd round, 37th also from the Mississauga Reps, and best friend of Michael Renwick, Davis Young would be next to join the Bulldogs pipeline. Scoring 42 points in 33 games while serving as an assistant captain, Young would continue his success posting 6 points across 5 games in the OHL Cup. Young would spend the 2018-19 season between the Oakville Blades and Brantford Jr. 99ers of the OJHL before making his Hamilton Bulldogs in Game 4 of the Eastern Conference Quarterfinals against the Ottawa 67’s in March of 2019. Young would go on to spend the 2019-20 season with the Bulldogs looking to find his way in the OHL, appearing in 12 games while scoring 3 goals and an assist for 4 points and adding an additional 3 points in 7 games while on loan with the Brantford Jr. 99ers. Competing for ice-time with an impressive group of young talent, Young would show flashes of his potential as a two-way center and looks to build on that for the 2020-21 season.

The Bulldogs would bolster their depth between the pipes in the 5th round with the 95th overall selection with the pick of Hamilton’s own Marco Costantini who starred with the Vaughn Kings in his minor midget season, posting an incredible 1.57 GAA across 47 starts and adding a sparkling 1.83 GAA / .930 SV% at the OHL Cup where he would be named a tournament All-Star. Moving to the Hamilton Kilty Bees for the 2018-19 season, Costantini would shine in the GOJHL as a 16-year old posting a 2.26 GAA / .922 SV% ranking 4th out of 53 goaltenders who had 10 or more appearances in the league. Cleary a bright star, the Bulldogs would utilize Costantini in an emergency backup role at times during the 18-19 season to acclimate the OHL. Making the team as a tandem with 2017 draftee Zachary Roy to open the 2019-20 season, Costantini would have his rookie ups and downs and while he would finish the season with a 4.34 GAA / .873 SV%, you could see the incredible potential that Costantini brings from his athleticism to ability to make the incredible look ordinary in net.

Staying in the 5th round, with the 98th overall selection the Bulldogs would return to the blueline drafting Frank Jenkins from the Honeybaked U15 program in Michigan. The Fraser, MI native had quickly built a reputation as tough to play against defender who could drive opposing attackers through the boards with incredible strength. Transitioning to the OHL in the 2018-19 season the reputation was quickly proven to be true as Jenkins had little difficulty adjusting to the physical rigors of the OHL, adding a physical presence much like Navrin Mutter would a year prior that would make an impact over the 62 games he would appear in across the next two seasons. Jenkins looks to continue to grow his game but retains that trademark snarl while defending behind his own blueline.

In the 6th round with the 101st overall selection the Bulldogs would take George Diaco from the London Jr. Knights. Coming off an incredible draft season in minor midget, Diaco would lead the Knights in both regular season scoring, 52 points in 33 games, as well as playoff scoring, 17 points in 12 games. Able to distribute and fill the net, Diaco would transition to the powerhouse London Nationals of the GOJHL for the 2018-19 season where despite his diminutive size he would prove to be a lightning bolt for offensive creativity at the junior level producing 42 points across 47 regular season games before having a breakout playoff performance piling up 29 points in 21 playoff games, good for 2nd on the team and showing he was ready for the next jump. Making the Hamilton Bulldogs to begin the 2019-20 season, Diaco would go on to appear in 55 games, playing in various roles through the lineup and posting 6 goals & 12 assists for 18 points on the season and showing a lot of potential to grow as a player as his OHL career continues.

Continuing in the 6th round with the 118th overall pick, the Bulldogs would again turn to the state of Michigan selecting Westland, MI product Avery Hayes from the Honeybaked U16 program. Playing up an age group in his OHL Draft season, Hayes was outstanding producing 55 points across 59 games against older competition and had put himself on the map for the USHL & NCAA in addition to the OHL. The Bulldogs would win the race for Hayes, getting his commitment prior to the 2018-19 season where he would make his OHL debut. Finding near instant chemistry with fellow rookies Logan Morrison and Liam Van Loon, Hayes would produce 18 points across 64 games but showing he had the ability to take his game to the next level. The advancement would begin in the 2019-20 season as Hayes would not only produce 29 points in 42 games, despite an absence due to illness, but would become a key member of the Bulldogs penalty kill and really round out his 200-foot game.

Much like with Isaac Nurse in the 2015 OHL Draft and his selection in the 11th round, the Bulldogs would find another local gem in the 14th round with the 278th selection with Mark Duarte of the Hamilton Huskies. The hard working, power forward would post 23 points across 33 games in his draft season before moving to the Hamilton Kilty Bees for the 2018-19 season. Duarte would use the 18-19 season a learning tool, starting slowly but coming on as the season went along finishing with 25 points in 38 games, playing at nearly point per game over the last half of the season before starring in the playoffs with 8 points in 10 games, good for 2nd on the team. Duarte would commit to the Bulldogs in the summer of 2019, debuting in the OHL in the 2019-20 season where he would continue to play his power forward style, and posting 5 points through 27 games. Following in the footsteps of Isaac Nurse, there is a lot of potential for Mark Duarte to be the next late round local to make a big impact with the Hamilton Bulldogs.

In addition to the players who have already made their mark in the OHL, the Bulldogs have seen three draft selections commit to the NCAA. Patrick Shmiedlin (7th round, 138th overall) selected from Culver Military Academy Prep will head to Colorado College for the 20-21 season, Cole O’Hara (10th round, 198th overall) selected from the Toronto Jr. Canadiens will head to UMass Amherst for the 21-22 season while Jr. Canadiens teammate Ryan Tverberg (12th round, 229th overall) will head to Harvard for the 20-21 season. Additionally, with their last selection in the draft (15th round, 298th overall) the Bulldogs would select Matteo Costantini from the Niagara North Stars, Costantini has since gone on to finish 3rd in the OJHL in goal scoring in the 2019-20 season with the Buffalo Jr. Sabres.

Potentially the most successful draft to date for the Hamilton Bulldogs, the 2018 OHL Priority Selection Draft has provided what looks like the backbone for the franchise’s next run at the OHL Championship. Finding talent at all points of the draft, cashing in on high selections, hitting home runs in the middle rounds and finding potential gems late, the scouting and management staff of the Bulldogs deserves a massive pat on the back for what they were able to accomplish just a few weeks before the team would win the 2018 OHL Championship.