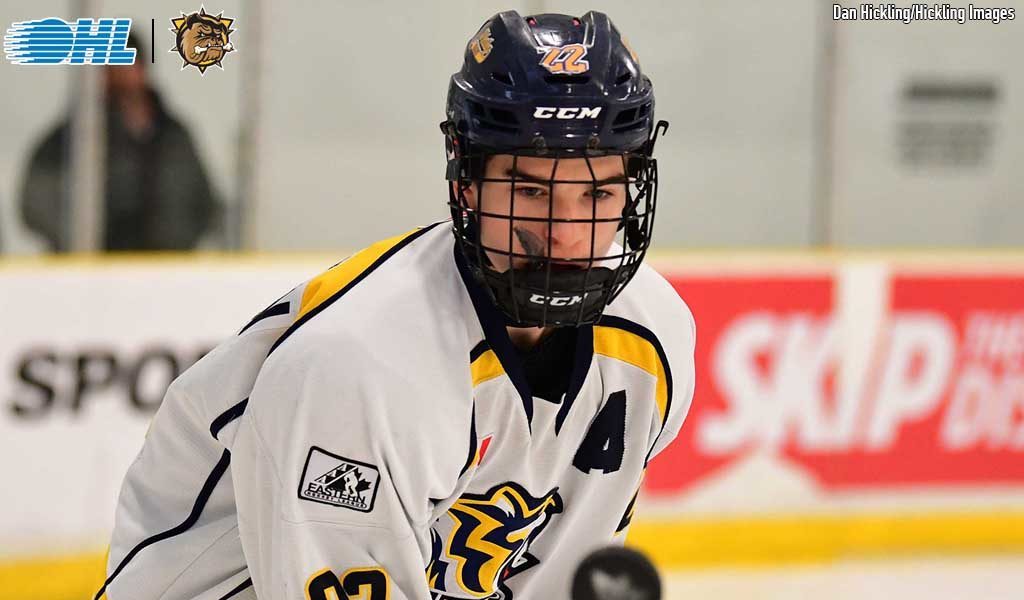 As the Hamilton Bulldogs began to celebrate the team’s 5-year anniversary, the franchise would see history repeat itself in it’s 5th OHL Priority Selection Draft. In the 2015 edition of the draft the Bulldogs held the 8th overall pick in the 1st round and the 40th overall pick in the 2nd round where they would take franchise cornerstones Matthew Strome and MacKenzie Entwistle. The team would hold the same two selections in the 2019 OHL Priority Selection where they would look to once again add cornerstone players for the franchise’s next OHL Championship run.

With the 8th overall pick in the 1st round the Bulldogs would select Ryan Winterton of the Whitby Wildcats. Winterton arrived in Hamilton coming off a tremendous season in Whitby scoring 38 goals & adding 34 assists for 72 points in just 36 games, adding 6 points in 7 playoff contests and another 5 points in 4 games at the OHL Cup tournament. Playing a hybrid style, blending power forward size with speed and a lightning bolt shot Winterton would open his OHL career by scoring in his first game as a Bulldog and finishing his rookie season with 12 goals and 11 assists for 23 points across 53 games. In addition to impressing as a rookie in Hamilton, Winterton would also be named to Team Canada for the 2019 IIHF World U-17 Hockey Championship where he would record 3 assists across 5 games representing Team Canada Black.

In the 2nd round with the 40th overall selection the Bulldogs would add Lawson Sherk of the Halton Hurricanes who, much like now teammate Ryan Winterton, was coming off of a spectacular minor midget season which would see him continue to improve as the season went along. Scoring 15 goals and adding 35 assists for 50 points during 31 regular season games, Sherk would take off by playoff time potting 11 goals & 5 assists for 16 points in 11 playoff contests and another 4 goals & 4 assists for 8 points in 5 games at the OHL Cup. Named OMHA SCTA player of the year for the 2018-19 season, Sherk displayed a knowledge of the game far beyond a 16-year old and continued that into his rookie OHL season. Sherk would appear in all 62 games for the Bulldogs as a rookie scoring 5 goals & 10 assists for 15 points while quickly becoming a trusted member of the Bulldogs penalty kill and seeing opportunity on the second power-play unit. Again, like Ryan Winterton, Sherk would score his first OHL goal in his first game and showing the star level potential he carries throughout the season.

Turning to the blueline in the 3rd round with the 49th overall selection, the Bulldogs would select towering Toronto Red Wings defenseman Chandler Romeo. At 6’4’’ and 175lbs the size and mobility factor jumped off the page with Romeo, a rare combination that has seen the defender quickly rise through the ranks of the Bulldogs system. After scoring 27 points across 71 games in his minor midget season with the Red Wings, Romeo would make a single playoff appearance with the Aurora Tigers before heading to Brantford where he would split the 2019-20 season between the Brantford Bandits of the GOJHL & Brantford Jr. 99ers of the OJHL seeing significant development time with both organizations, including an impressive playoff appearance with the 99ers where he’d score a goal and an assist in 2 playoff games as a callup before Brantford was eliminated and Romeo would finish the season skating with the Bulldogs. A future staple of the Hamilton blueline, Romeo shows tremendous promise moving forward.

For the third straight OHL Priority Selection Draft the Bulldogs would pick up a goaltender coming off a standout performance at the OHL Cup. Following in the footsteps of Zachary Roy and Marco Costantini, Matteo Drobac would be selected in the 6th round, 110th overall from the Halton Hurricanes. Drobac would appear in 15 regular season games posting a sparkling 2.04 GAA before shining in a pair of appearances at the OHL Cup posting a 1.38 GAA / .944 SV%. Joining the GOJHL’s Hamilton Kilty Bees for the 2019-20 season, Drobac, like Costantini the year prior, would greatly impress posting a 2.69 GAA / .923 SV% across 22 games, with his .923 SV% placing him 5th out of 57 goaltenders who played 10 or more games in the season. Drobac would additionally make 2 appearances with the Bulldogs during the 19-20 season in emergency starts against the London Knights and Ottawa 67’s, showing his potential and willingness to battle in goal that gives a window into a bright future for the talented netminder.

In the 8th round with the 150th overall selection the Bulldogs would add Honeybaked U16 forward Ryan Humphrey to the organization. Mirroring the success of Avery Hayes the year before him, Humphrey would play an age group up for his minor midget season and excel scoring 64 points across 75 games while bringing a “shift-disturber” attitude to the ice on each and every shift. Committing to the Bulldogs on the opening day of the 2019-20 season following a stand out training camp, Humphrey would impress as an OHL rookie, picking up 3 goals and 5 points across 43 games while playing a no fear type of style and driving opposing defenders mad with his non-stop motor. Potential for a breakout for the talented Northville, MI is clear and big things look to be ahead for the big-time character with the Bulldogs.

In addition to the five players who spent time with the Bulldogs in the 2019-20 season, three more have made early commitments to the NCAA as forwards Kaleb Nelson (4th round, 69th overall) from the York Simcoe Express has committed to Providence College for 2021-22 with Connor Pelc (6th round, 111th overall) from the Buffalo Jr. Sabres U16 also committing to Providence College but with a 2022-23 enrollment. Additionally, defenseman, and former teammate of Chandler Romeo with the Toronto Red Wings, Owen Simpson (4th round, 73rd overall) has committed to Harvard for the 2022-23 season.

With the 2020 OHL Priority Selection Draft taking place tomorrow, the Hamilton Bulldogs don’t have to look far into their history for draft success to draw on as their last two classes have already combined to have 13 players who are regulars or committed to the team with 5 impact talents from the 2003-born class alone. With the comparison of draft placement to Matthew Strome and MacKenzie Entwistle it does add quite a bit for Ryan Winterton and Lawson Sherk to live up to but if early returns are any indication, it would appear the Bulldogs have found a pair of cornerstones they will be able to build around for several seasons to come.