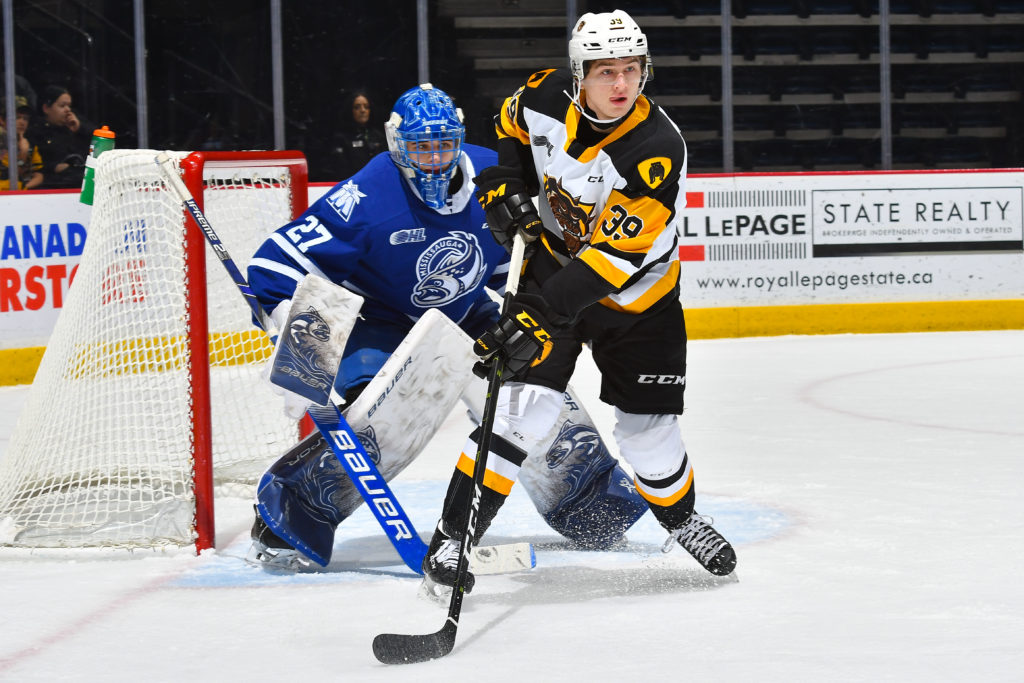 HAMILTON, ONTARIO. Kai Edmonds posted a contested shutout for the Mississauga Steelheads, while Zachary Roy held up his end of the goalie duel, posting 38 saves in a 3-0 loss for the Bulldogs. Jan Jenik believed he had extended his point streak to 27 games before the officials would waive off what would have been his 23rd of the year. The Bulldgos penalty kill in the bright spot of the game would go on to kill all 8 Mississauga power-plays they faced.

Less than 24 hours since the Hamilton Bulldogs had last seen the Mississauga Steelheads and the first 20 minutes was goalless, but not at all without incident. The two teams were battling hard for a goal but could not manage to get one, finishing the first period with a score of 0-0. The period was not short of penalty minutes as it totaled 40 minutes including a ten-minute misconduct against Mississauga. Heading into the second period the Bulldogs would have over two minutes of 4 on 3 time to kill. The shots on goal at the end of the first were 13-7 for the Mississauga Steelheads.

Despite being able to kill the penalties to start the second period, along with a huge save from Zachary Roy on a Mississauga breakaway, the Bulldogs couldn’t put one away making the score at the end of the second period 2-0 for the Steelheads. The first Steelhead goal was credited to Richard Whittaker with his 8th goal of the season, assisted by Cole Schwindt and Ethan Del Mastro at 16:05, shortly followed by a goal from Duncan Penman assisted by Ty Collins and Keean Washkurak at 16:43.

Securing the win for the Steelheads was Whittaker with an unassisted goal, his second of the game on an open net with 18 seconds left of the game, finishing the game with a score of 3-0 for Mississauga. This game broke Jan Jenik’s 26 game scoring streak after his late goal was disallowed due to the officials claims that the whistle had blown before the puck crossed the Mississauga goal line. Narvin Mutter totaled 18 penalty minutes this game in hopes of sparking some aggression onto his teammates but the Bulldogs were not able to overcome the deficit and will remain tied for 5th in the Eastern Conference.

Finishing off this weekend 1-1 with the Mississauga Steelheads, the Hamilton Bulldogs will return to action Thursday, December 12th in Peterborough at 7:00pm before visiting the Kitchener Rangers on Friday, December 13th with a 7:30 puck drop. The Bulldogs will finish out next weekend at home, December 14th for the beloved Teddy Bear Toss game, vs the Kingston Frontenacs with puck drop at 4:00pm.