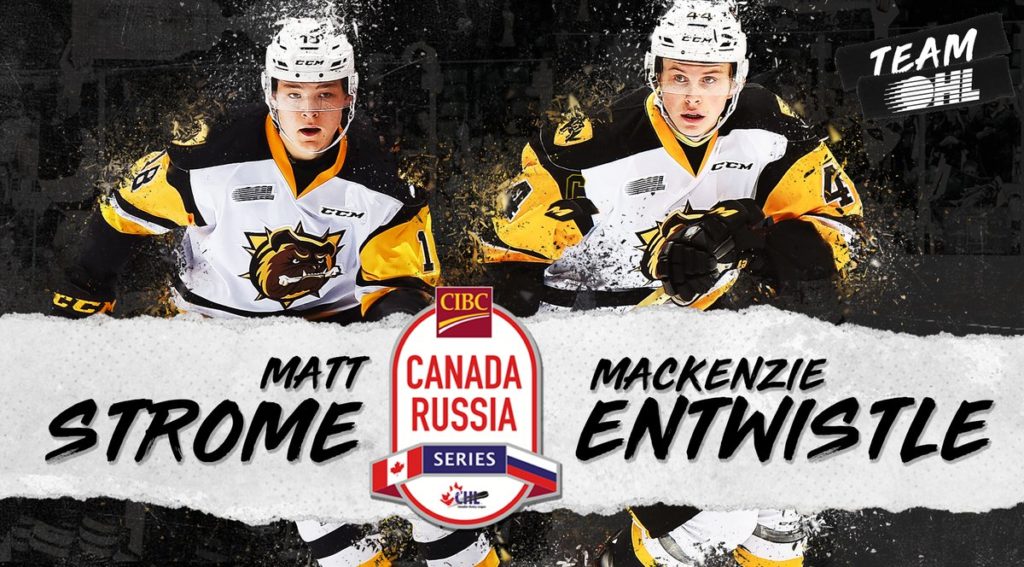 A night later Russia exacted revenge with a 3-1 win, connecting on a late third period power play as Stepan Starkov scored the deciding goal with less than two minutes to spare in regulation.

Here’s another look at the #OHL stars who will compete Nov 8 & 12 in the @CIBC #CANvsRUS Series.

“That was really good hockey last night and tonight,” commented Team WHL head coach Tim Hunter (Moose Jaw Warriors) of his clubs portion of the series. “It was a good first period, but I think we ran out of gas a little bit. A lot of guys playing four games in five nights. That’s probably the fastest the most of the guys in the WHL have played this season.”

Team OHL head coaches Derian Hatcher (Sarnia Sting) and Greg Walters (Oshawa Generals) take over behind the bench for Games 3 and 4 set for Thursday night in Sarnia and Monday in Oshawa.

This marks the third straight year that the OHL inherits a tied series and the sixth time in the history of the event that the scenario has arisen. Team OHL has split decisions with Russia in each of the past two years but the CHL ultimately went on to take the series both times.

Of note, both Owen Tippett (Mississauga Steelheads) and Markus Phillips (Owen Sound Attack) will play in both games as they embark on their third CIBC Canada Russia Series together.

Sarnia will host Thursday’s game for a CHL record-tying fourth time, following events in 2003, 2006 and 2012 before Oshawa hosts its third game after previous contests in 2006 and 2013.

Games 3 and 4 of the 2018 CIBC Canada Russia Series get underway at 7ET/4PT and will be aired live on Sportsnet while also streaming online at CHLLive.com.