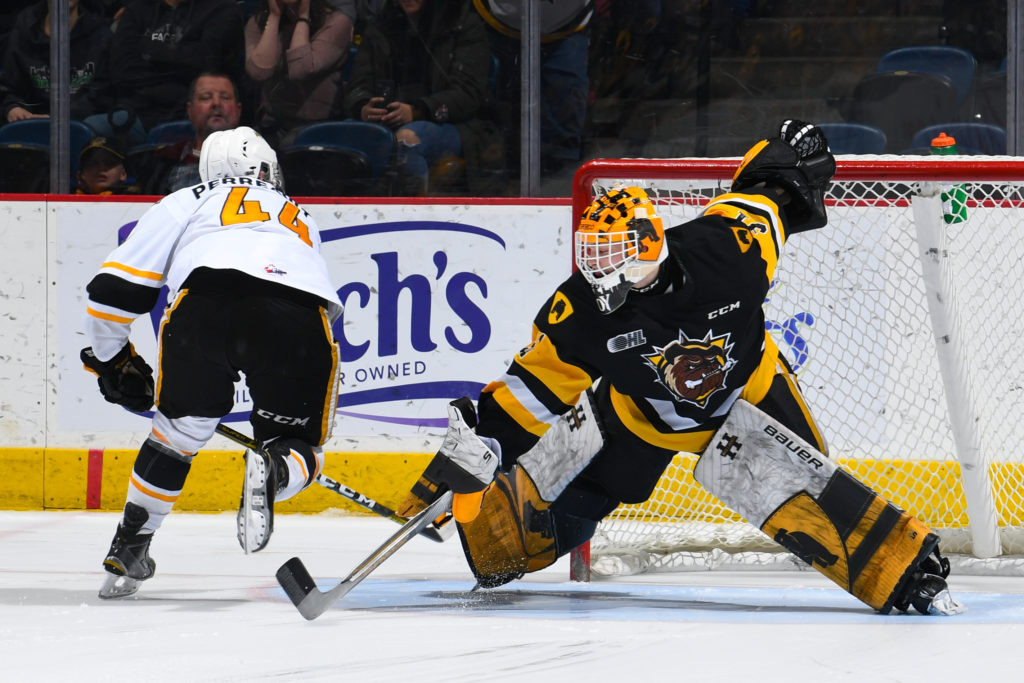 HAMILTON, ONTARIO. Zachary Roy was brilliant in stopping several breakaways while his counterpart Benjamin Gaudreau would stop 41 as the Sarnia Sting pulled off a 4-3 shootout victory over the Hamilton Bulldogs. Even in the loss the Bulldogs gain a point and see Tag Bertuzzi cross the 20-goal plateau, while Gavin White recorded his first OHL goal.

The Hamilton Bulldogs struck first on Saturday afternoon after Isaac Nurse drew a quick power-play that led to Tag Bertuzzi hitting a milestone. Cameron Supryka moved the puck across the offensive zone to Arthur Kaliyev who played the puck to the front of the net creating a rebound where Bertuzzi would find it and deposit his 20th of the season at 2:00 giving the Bulldogs the 1-0 lead. Sarnia would equalize just under four minutes later as a miscommunication on a line change led to Jacob Perreault making his way into the Bulldogs zone and beating Zachary Roy on the breakaway for his 26th of the season tying the game at 5:56. The Bulldogs would control the majority of the period outshooting the Sting 16-6 but it was Zachary Roy who would have the highlight moment, robbing Ryan McGregor on a breakaway with a brilliant glove save to keep the game tied 1-1 through 20 minutes.

The second period would open exactly the way the Bulldogs wanted as Tag Bertuzzi got the puck to Ryan Winterton coming across the Sarnia line, his shot would deflect to the right and onto the tape of defenseman Gavin White who would beat a sprawling Benjamin Gaudreau for his 1st Ontario Hockey League goal at 2:02 giving Hamilton a 2-1 lead. From there, Sarnia would change the momentum of the game, Ty Voit would tie the game back up at 9:37 of the period off a pass from Jacob Perreault on a short two-on-one which would be followed before the period was out at 18:30 by Sam Bitten, showing great speed to turn past the Bulldogs defense, drive the front of the goal and tap the puck past Zachary Roy to give Sarnia their first lead of the game at 3-2, which they would take into the locker room following 40 tightly contested minutes.

The third period would see the Bulldogs pour the pressure onto Sarnia, outshooting the Sting 19-5 in the frame, looking for the breakthrough to tie the game. It would finally come at 18:07 as Tag Bertuzzi would find Arthur Kaliyev in the right wing circle, Kaliyev would take two shots at Gaudreau, with his second springing loose into the slot where Jake Gravelle would jump on it to score his 3rd goal of the season, tying the game 3-3 and sending the game to overtime.

The extra five minutes wouldn’t solve the game but the Bulldogs would manage to kill off a pair of penalties in the overtime to send the game to a shootout. Only one goal would be scored in the shootout, coming the way of Sarnia’s Jacob Perreault, with Benjamin Gaudreau stopping all three Bulldogs he faced to secure the 4-3 Sarnia victory.

The Hamilton Bulldogs will return to action on Friday, January 17th when they travel to Leon’s Centre in Kingston to take on the Frontenacs at 7:00pm before a quick turn-around to take on the Ottawa 67’s at TD Place on Saturday, January 18th in a 2:00pm start..