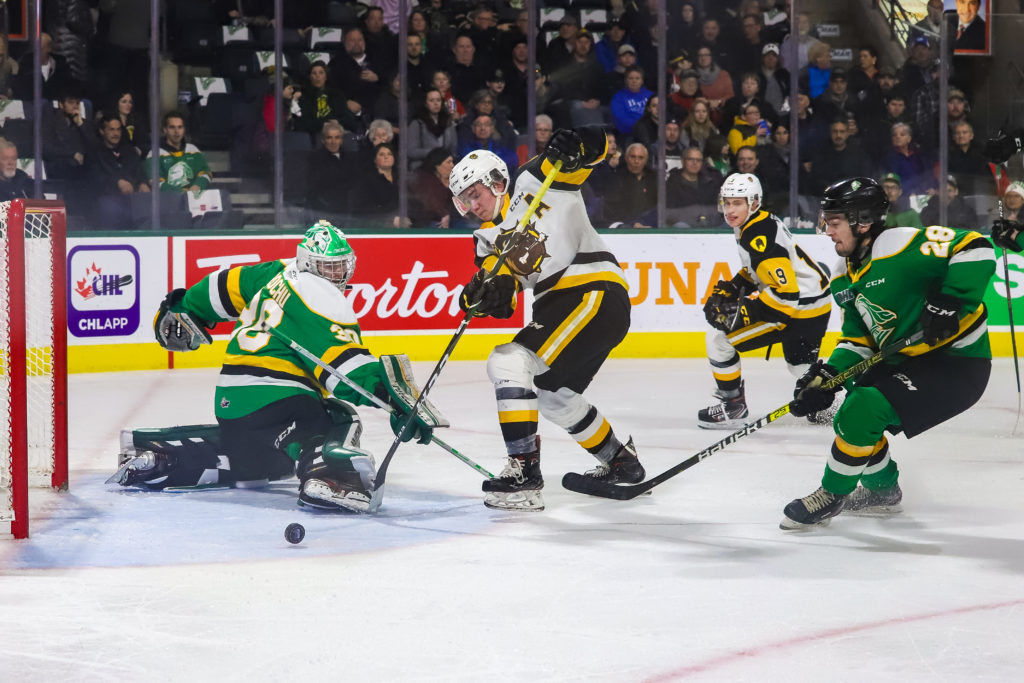 HAMILTON, ONTARIO. Zachary Roy stopped 46 shots on the night but the offensive depth of the Knights was just too much to overcome as Jonathan Gruden would lead the way with a pair of goals in a 4-1 London victory. The Bulldogs held the 3rd ranked power-play in the league to an 0 for 5 mark on the night in a positive for a Hamilton team that stayed stride for stride with one of the best teams in the OHL’s Western Conference.

The first period at Budwiser Gardens was played at lightning speed as the teams would combine for 32 total shots, split evenly between the sides, with both Zachary Roy and Brett Brochu looking strong starring down several excellent opportunities at both ends of the rink. The Knights would open the scoring at 2:28, as Antonio Stranges slowed the play through neutral ice, feeding the left-wing side to defenseman Kirill Steklov racing up into the play before feeding Jonathan Gruden in front of the Hamilton goal for his 19th goal of the season. From there the Bulldogs would pour the pressure on the London goal until Jason Willms would jump on a loose puck for a breakaway which would be denied by Roy with a tremendous stop. Despite momentum built through the first period for the Bulldogs, London would strike again as Sean McGurn would win a draw cleanly back to Connor McMichael at the right of Zachary Roy’s goal which McMichael would shelf for his 34th of the year and a 2-0 London lead which they would hold through 20 minutes.

The trend of even and exciting hockey would continue into the second period with the teams trading power-plays and scoring chances but the second frame would see Hamilton’s opportunity to strike. At 15:16 Liam Van Loon would carry the puck through neutral ice playing along for Isaac Nurse quickly touching it in turn to Bradey Johnson who would carry down the slot at Markus Phillips, pushing the puck around him and picking it up on the other side, Johnson would throw the puck on Brochu’s goal and beat the London netminder to cut the lead in half at 2-1, scoring his 5th of the season.

Momentum was fleeting for the Bulldogs, just 1:46 into the third period, Connor McMichael would win a faceoff right to the stick of Luke Evangelista who managed to squeeze a shot between the pads of Zachary Roy to give the Knights a 3-1 lead. The Bulldogs, despite 36 shots at Brett Brochu just weren’t able to further crack the Knights netminder as he would make 35 saves on the night with Jonathan Gruden depositing his 2nd of the night and 20th of the season at 19:50 into the empty net to spoil Roy’s 46 save performance in the Hamilton net and assure a 4-1 London victory.

The Hamilton Bulldogs will return to action on Saturday, January 25th, with a key conference matchup at Sadlon Arena against the Colts at 7:30 before the team returns home for a matinee on Sunday, January 26th at FirstOntario Centre hosting the Peterborough Petes for a 1:00pm puck drop.