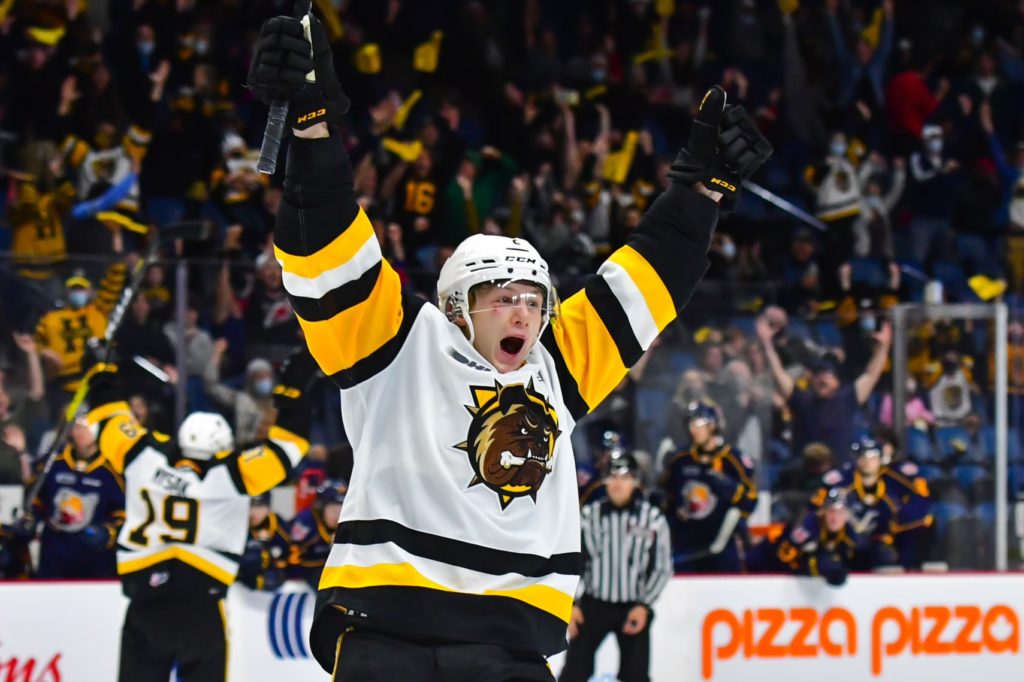 HAMILTON, ONTARIO. For the first time in 582 days, the Hamilton Bulldogs hosted a game on home ice at the FirstOntario Centre and defeated the Barrie Colts in stunning fashion 5-4 in overtime.

The Bulldogs got off on the right foot at 8:52 of the first period as Jan Mysak opening the scoring on a feed from Avery Hayes to put the Bulldogs ahead 1-0. Hamilton would take that lead to the intermission with Marco Costantini stopping all 11 shots he faced in the opening frame.

The second period would see the tide turn, after a Lawson Sherk shorthanded goal was overturned, the Colts would grab the momentum. Jacob Frasca & Ryan Del Monte would score 3:11 apart to give the Colts a 2-1 lead heading into the second intermission, silencing the 4527 in attendance.

The third period would see the Colts expand their lead further with Oskar Olausson recording a power-play strike at 2:23, followed by Jacob Frasca’s 2nd of the night 2 minutes later to give the Colts a 4-1 lead. Much like a night earlier, the Bulldogs wouldn’t quit and at 9:32 on the power-play the hard work would pay off. Nathan Staios would gather the puck at the left point and fire a shot that would be deflected first by Jan Mysak and then hammered home by Navrin Mutter to draw the Bulldogs within two. Just 11 seconds later Jorian Donovan would hit Avery Hayes with a neutral zone pass, in turn springing Ryan Humphrey on Tanner Wickware’s goal, Humphrey’s backhand would beat the Colts goaltender high drawing the Bulldogs back within one at 9:43. The press for a tying goal would continue late into the third period and at 17:09 Colton Kammerer would find Logan Morrison off the left circle moving into the slot, his pass would spill out to Jan Mysak who put the puck past Wickware, tying the game at 4-4.

Off to overtime with both teams jockeying for possession the Bulldogs would take control on the left half boards with Jan Mysak & Logan Morrison cycling the puck back to Artem Grushnikov who would rocket his first OHL goal past Wickware, completing the Bulldogs comeback and winning the team’s home opener in dramatic fashion.

The Hamilton Bulldogs return to action on Friday, October 15th hosting the Niagara IceDogs at 7pm.