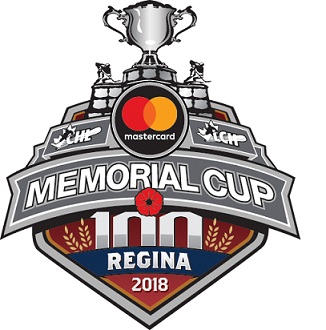 The long-awaited day has finally arrived in Regina as the centennial celebration of the Mastercard Memorial Cup gets underway as the Hamilton Bulldogs take on the host Regina Pats.

The Bulldogs make their Mastercard Memorial Cup debut in just their third season in Hamilton. The OHL Champions scored three straight five-game series victories before knocking off the CHL’s top-ranked Sault Ste. Marie Greyhounds in six games. The Bulldogs capped off their latest series with a third period comeback to hoist the Robertson Cup on home ice.

“It’s a special opportunity to be here,” said Bulldogs winger Matthew Strome, who had the opportunity to see older brother Dylan play in the 99th edition last spring in Windsor. “My brother just told me to take it all in. It’s a cool event where you get to play against the top teams in the CHL and you have to make sure you’re focused and get your rest when you have the chance.”

Standout centreman and OHL Playoff MVP Robert Thomas won a Mastercard Memorial Cup title with the London Knights in 2016 and has been able to impart some wisdom to his younger teammates.

“I think I’ve helped them out a bit,” he said with a smile. “Obviously there’s a ton of attention surrounding this tournament and rightfully so as it’s the biggest event in Canadian junior hockey. You just have to enjoy the experience, it’s a once in a lifetime opportunity.”

The host Regina Pats see their first game action since April 2nd, a Game 7 first round loss at the hands of the Swift Current Broncos. Fourty-seven days of preparation then ensued and John Paddock’s club has put in the work, equipping themselves to face the OHL champion Hamilton Bulldogs to kick things off at the Brandt Centre tonight.

“There’s only one 100th year,” said Paddock. “I go back to somewhere in February 2017 and I recall (assistant coach) Dave Struch asking Sam Steel what he thought it would be like to play in an event like this and he said, ‘I get goosebumps every time I think about it.’ That was 15 months before, but that’s the same for all these teams and players here. There’s only one 100th and that’s why this is such a big event.”

The Pats played to a 40-win season, one less than the defending Mastercard Memorial Cup Champion Windsor Spitfires entered with prior to hoisting the Memorial Cup as hosts a year ago.

The Mastercard Memorial Cup returns to Regina for the first time since 2001 when the host Pats defeated the Ottawa 67’s in a tie-break game before suffering a 5-4 semi-final loss to the Val-d’Or Foreurs.