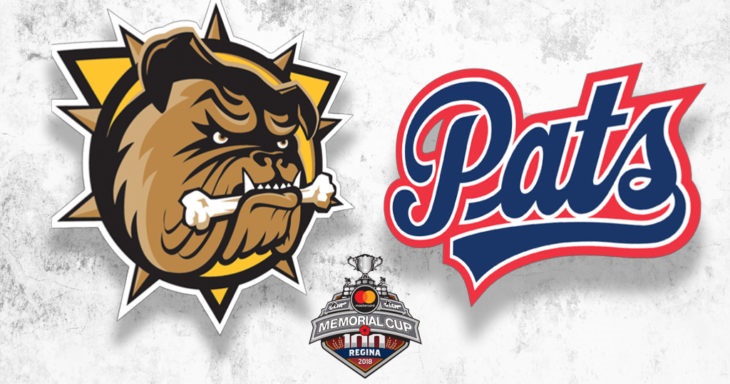 The Hamilton Bulldogs are two wins away from claiming a Memorial Cup Championship.

The Bulldogs will take on the host Regina Pats in the tournament’s semi-final game at the Brandt Centre in Regina on Friday night at 10 pm EST.

Hamilton ended up in the semi-finals after the Pats held on for a crazy 6-5 win over the WHL Champion Swift Current Broncos in the tournament’s final round-robin game last night. The Broncos were eliminated with a 0-3 record while the Bulldogs, Pats and Acadie-Bathurst Titan were all tied at 2-1. The formula used to determine the seedings pushed the Titan to Sunday’s final, leaving Hamilton and Regina to play Friday’s semi-final.

It will be a re-match of the Memorial Cup’s opening game last Friday night that saw the Pats edge the Bulldogs 3-2. Hamilton had the lead twice in that game thanks to goals from Robert Thomas and Marian Studenic, but Regina fought back all night and just when it seemed the game was going to overtime, Nick Henry buried a rebound at 19:27 of the 3rd period to give the Pats the win.

The semi-final game will feature the tournament’s top goaltender during the round-robin in Kaden Fulcher of the Bulldogs who has a sparkling 2.01 GAA and just as impressive SV% of .931. Regina throws out the round-robin’s leading point producer in Sam Steel who has 1-goal and 10-assists for 11-points including 5-assists in last night’s win over Swift Current, which tied the Memorial Cup record for assists in a single game.

The winner Friday night will face the Acadie-Bathurst Titan in Sunday’s final (7pm EST) to decide the winner of the 100th Mastercard Memorial Cup. Hamilton edged the QMJHL champs in the round-robin 3-2 while Regina dropped a wild 8-6 game to the Titan.

OHL Academic Players of the Month for November
21 hours ago