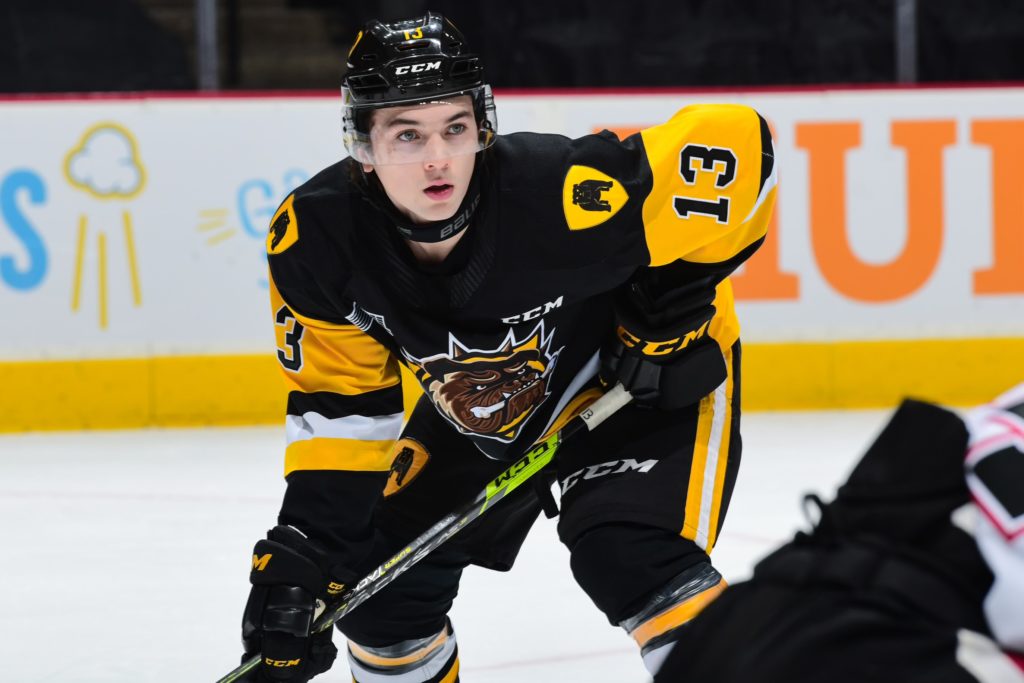 HAMILTON, ONTARIO. The Hamilton Bulldogs returned to the ice on Wednesday night against the Ottawa 67’s, making up the January 8th postponement, and did so in style with Avery Hayes hitting the 20-goal milestone for the first time in his OHL career.

Hayes opened the scoring just :25 seconds into the contest, surprising Ottawa netminder Will Cranley with a sharp shot crossing the offensive blueline for his 19th of the season and 1st of the game. Colton Kammerer & Jan Mysak each collected an assist on the Hayes opener. With the Bulldogs on the power-play at 6:21, Avery Hayes played the puck to Mason McTavish who flipped a short pass to the left point for Nathan Staios who drove the puck through a Hayes screen, giving the Bulldogs a 2-0 lead on Staios’ 7th of the season. Ottawa would draw one back on a hard luck play for Jorian Donovan as a Jack Matier point shot hit the Bulldogs defender in the backside bouncing into the Bulldogs net. The wacky bounce was the only shot to beat Marco Costantini through 20 minutes, sending the Dogs to the locker room with a 2-1 lead.

Similar to the first, the Bulldogs bubbled their lead by a pair in the second before Ottawa would fight back. Avery Hayes collected his 2nd of the night after Noah Van Vliet, in his OHL debut moved the puck forward to Ryan Humphrey on the left wing, feeding Hayes filling at the top of the slot for a bar-down drive, giving Van Vliet his first OHL point and Hayes his first 20 goal OHL season at 4:59. Just over 6 minutes later, after a brilliant Marco Costantini shoulder save, Mason McTavish sent a rocket of a pass from just in front of his own net to George Diaco off the end boards of the 67’s zone. Diaco twisted off a check setting a backhand pass on a tee for a streaking Ryan Winterton, moving to his backhand and beating Cranley, Winterton earned his 2nd of the season at 11:21 giving the Bulldogs a 4-1 lead. At 14:17 Ottawa did get one back with Thomas Johnston turning off the bottom of the right circle and firing over Costantini’s shoulder to cut the lead to 2, but once again Costantini would shut the door securing the 4-2 lead through 40 minutes.

The Bulldogs managed the final frame well, out-shooting the 67’s 11-5, with Costantini stopping all 5 shots he faced in the period and 20 of 22 overall to earn the Bulldogs the two points in a 4-2 victory.

The Hamilton Bulldogs return to action travelling to the Meridian Centre to face the Niagara IceDogs Saturday night at 7:00pm before returning home to take on the Kingston Frontenacs on Sunday at 2:00pm.