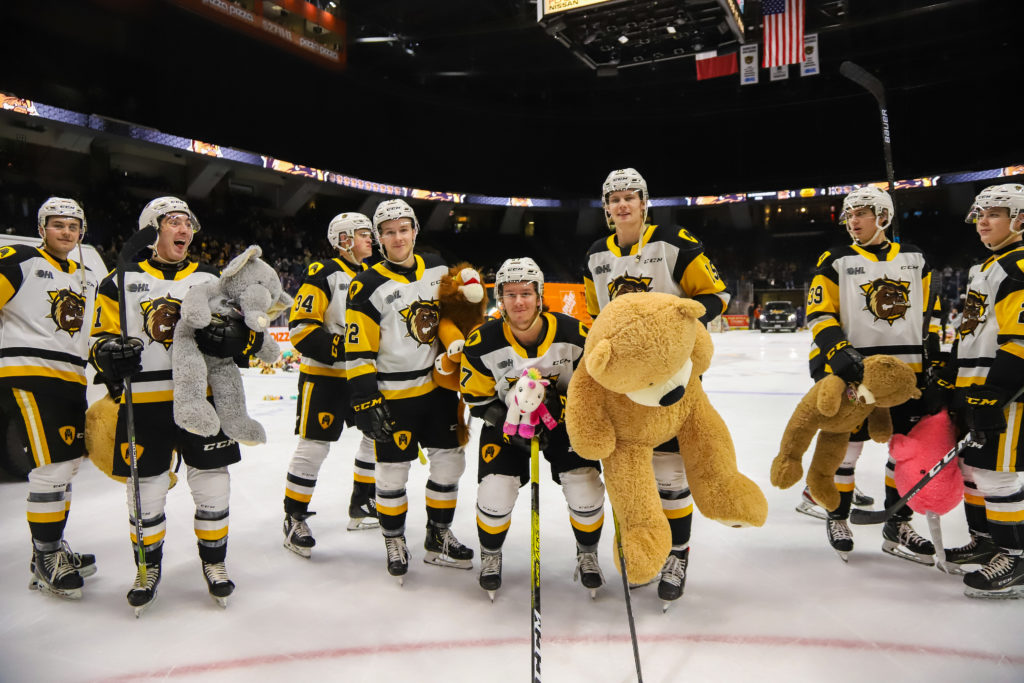 HAMILTON, ONTARIO. Avery Hayes was the standout for the Hamilton Bulldogs with a pair of goals, including the 1st period Toy Toss goal, which brought 10,032 stuffed animals & toques onto FirstOntario Centre Ice. The Bulldogs got contributions up and down the lineup with multi-point nights from Arthur Kaliyev, Ryan Winterton & Nathan Staios in addition to Hayes in the win.

A tough start to the game for the Hamilton Bulldogs would see the Kingston Frontenacs jump out to a 2-0 lead, first Shane Wright would hop on a rebound at 3:47 to record his 16th of the season, before Zayde Wisdom found himself alone in front of the Bulldogs goal for his 17th of the season at 7:01. The Bulldogs would quickly recover, while shorthanded at 9:06, Ryan Winterton would send Avery Hayes alone on a breakaway where Hayes would beat Ryan Dugas to the top right corner for his 12th of the season and unleashing a deluge of 10,032 stuffed animals and toques from the over 5,200 in attendance getting the Bulldogs back in the game. After the ice was cleared the Bulldogs would get their first power-play of the night, and Arthur Kaliyev & Kade Landry would trade the puck before Landry found Nathan Staios walking off the left point and rifling a shot past Dugas, Staios’ 3rd goal of the year, tying the game 2-2, which is where the game would stand through 20 minutes.

The Bulldogs entered the second period a motivated group and it would show as the offense took over the game. With the puck in the Frontenacs zone at 7:03, Arthur Kaliyev would force it loose and right onto Logan Morrison who would handcuff Ryan Dugas scoring his 15th of the season giving the Bulldogs a 3-2 lead. Hamilton would extend the lead from there. With Lawson Sherk screening Dugas and drawing traffic, Nathan Staios would drive off the point laterally across the offensive zone tossing the puck to goal, Ryan Winterton would find the rebound and go upstairs for his 7th of the year making it a 4-2 Bulldogs advantage. Through 40 minutes the Bulldogs would hold the two-goal lead and a 29-15 edge in shots on goal.

The third period would settle right down with Ryan Dugas making save after save to give the Frontenacs an opportunity to get back into the game but it wouldn’t be enough. Marco Costantini would stop 22 of 24 shots and with Dugas on the Kingston bench, Avery Hayes would launch his 13th of the season into the empty net to give the Bulldogs a 5-2 victory.

The Hamilton Bulldogs will return to action on Saturday, December 28th when they face-off with the North Bay Battalion at FirstOntario Centre at 4:00pm. The team will follow that with a trip to Guelph’s Sleeman Centre to meet the Storm on Sunday, December 29th at 7:00 before returning home for a New Year’s Eve matchup with the Mississauga Steelheads at 4:00pm.