HOCKEY FIGHTS CANCER IN HAMILTON – A SUCCESS IN THE BATTLE 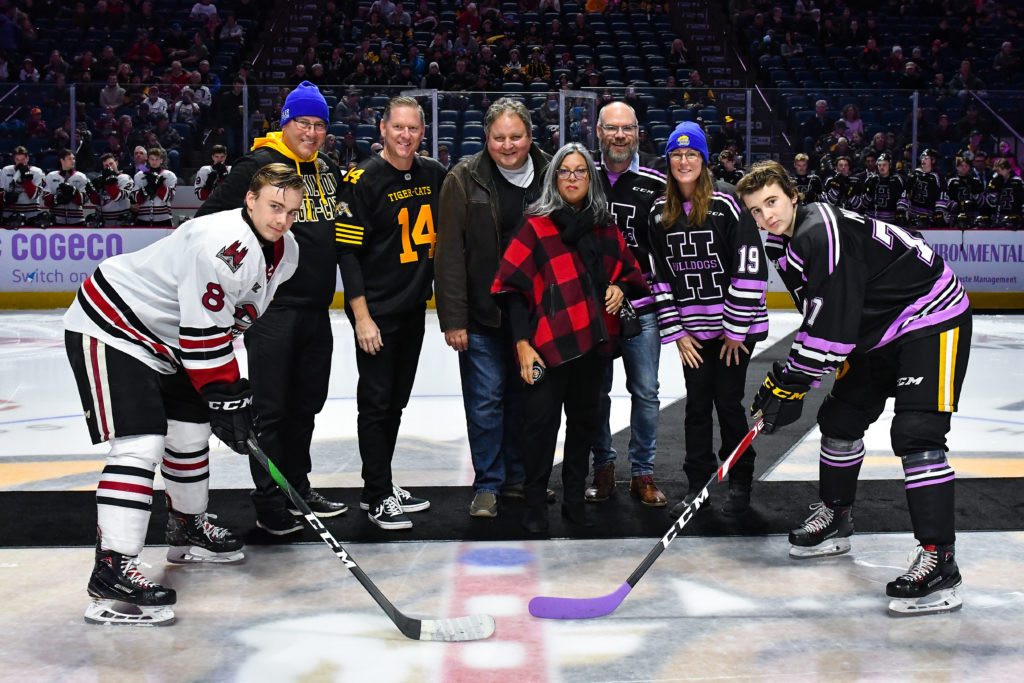 On Friday, November 22nd and Saturday, November 23rd, the Hamilton Bulldogs hosted back to back games against the North Bay Battalion & Guelph Storm in support of the Canadian Cancer Society and Juravinski Cancer Centre & Hospital.

From the beginning of the game on Friday night, you could tell the weekend would be emotional and exciting. The Hamilton Bulldogs hit the ice, trading in the usual black & gold for black & lavender jerseys which would be worn for both games and auctioned off with the proceeds going to the Canadian Cancer Society and Juravinski Cancer Centre & Hospital.

As the opening ceremonies got underway, the Hamilton Bulldogs own Jake Murray who has twice conquered cancer, in full uniform, skated to centre ice to take the ceremonial puck drop before Bulldogs public address announcer Aaron Walsh would ask for everyone in the crowd whose lives had been affected in some way by the disease to light up their cell phones. An incredible showing that even in the darkest times there remains light.

All of the Bulldogs rinkboard sponsors changed out their usual advertisements to lavender graphics for the weekend showing their support for this wonderful initiative. The Hamilton Bulldogs Foundation 50-50 draws and overwhelming support from The Beer Store were other drivers in the Bulldogs fundraising efforts.

The Bulldogs responded on the ice to the emotional weekend with back to back wins, a shutout victory on Friday night for Zachary Roy, before a tremendous back and forth on Saturday that would see Tag Bertuzzi & Marco Costantini play the role of twin heroes in a shootout victory over Guelph.

By the end of the weekend, every single one of the Bulldogs black & lavender Hockey Fights Cancer jerseys had been bid on and with all of the elements of the weekend, the Hamilton Bulldogs and Bulldogs Foundation are proud to have raised nearly $18,000 for the cause, which will be distributed to the Canadian Cancer Society and Juravinski Cancer Centre & Hospital.