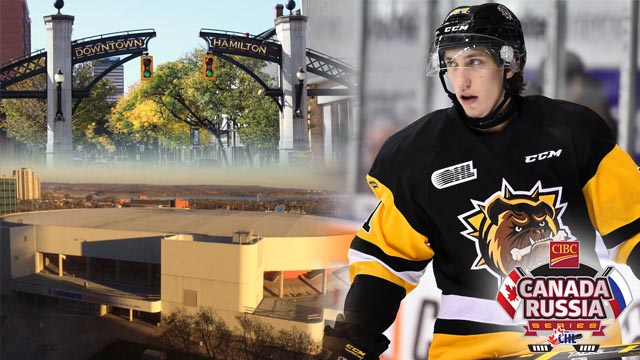 Steve Staios had his sights set on Will Bitten for a long time.

The Hamilton Bulldogs president and general manager, a native son of Hamilton, got his man on September 28th, putting him in Bulldogs black and gold as Bitten instantly became a go-to-guy in his new Hamilton surroundings.

A third round pick by the Montreal Canadiens this past June, Bitten says that the Bulldogs organization, from the top-down, is destined for big things.

After missing out on the playoffs last spring, the Dogs are off to a 10-6-3-0 start in their second season, sitting second in the East Division.

“I’ve had the chance to talk and get to know Steve (Staios) quite a bit,” said Bitten. “He and the management group have done a tremendous job with the team and I couldn’t be happier to be a part of the organization.”

Perhaps the part of Hamilton Bitten has enjoyed most has been a reunion with former head coach John Gruden who he played under in Flint last season.

Bitten and the Bulldogs are trying to bring playoff hockey back to the city for the first time since 2011.

In addition to that, Bitten is making a bid for a spot on Canada’s National Junior Team this December and it wouldn’t be his first tour of duty with Hockey Canada. The Gloucester, Ont. native won a gold medal at the Ivan Hlinka Memorial Tournament in 2015, a team that included fellow OHL’ers in Michael McLeod (Mississauga Steelheads), Jordan Kyrou (Sarnia Sting) and Victor Mete (London Knights).

Known as a player who can push the pace, Bitten is striving to play to his strengths on Monday night.

“I know they like my speed and its something I’ve been able to use in the international game in the past,” he said. “The Ivan Hlinka tournament was one of the highlights of my career and I really hope to be able to represent Canada again. I have to continue to play my game, use my speed and compete.”

What could turn out to be a crucial game in the 2016 CIBC Canada Russia Series gets underway in Hamilton at 7:00pm on Monday. Team OHL battles Russia in Game 4 of the series on Sportsnet.