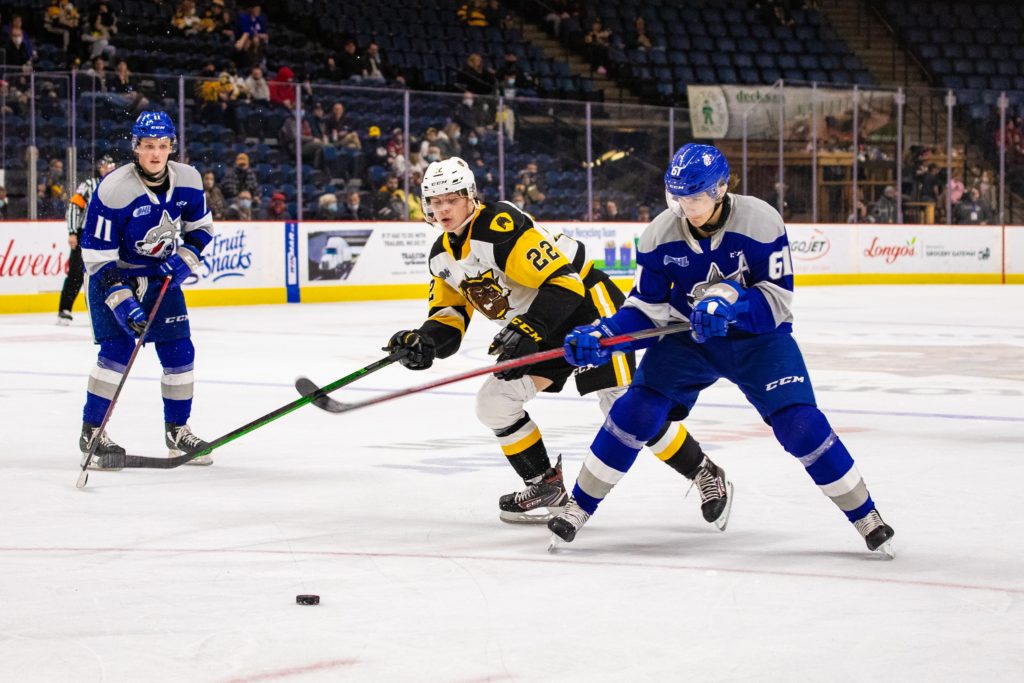 HAMILTON, ONTARIO. After coming off their 10-6 win against the Peterborough Petes the Hamilton Bulldogs were energized and ready to take on the Sudbury Wolves at FirstOntario Centre on Saturday night.

The first period both teams were evenly matched but after 11 minutes of play the Bulldogs scored a well-deserved goal. Hamilton’s own Mark Duarte scored a sleek tip in goal, his 5th of the season, from Gavin White’s rocket shot from the point with George Diaco adding a secondary assist. The Bulldogs weren’t done and wanted more before the end of period leading to Ryan Humphrey scoring, his 4th, on another impressive tip in at 16:01 from Chandler Romeo and Logan Morison. Just over one minute later Jan Mysak scored another goal, his 13th of the season, banking the puck off Sudbury’s Nolan Collins to give the Dogs a three-goal lead at 17:13. The Bulldogs ended the period 3-0 and fired up for more with Marco Costantini holding the door shut.

The second period started off with high intensity from both teams fighting to get the first goal of the period. The Wolves wanted it more and got their first goal of the game at 7:07 from Giordano Biondi to make the game 3-1. The Bulldogs fought hard to keep the lead throughout the second period and did just that to keep the game at 3-1 with Costantini recording 12 saves through 40 minutes.

The third period started off tight with both teams staying on pace and Marco Costantini and Mitchell Weeks, 33 stops already, not letting anything by. With just 12 minutes left of the period the Bulldogs and the Wolves were not happy with each other and had more than words to say. After the quarrel the Bulldogs had a different response with Logan Morrison scoring a goal that would be taken back due to goaltender interference. The Bulldogs were determined to fight back and put the game away with Diaco doing just that, scoring his 8th of the season from Avery Hayes and Mysak at 13:53. The Bulldogs ended the game in a feisty manner and made out with the 4-1 win.

The Hamilton Bulldogs return to action Thursday, November 25th against the Niagara IceDogs at 7:00pm at the Meridian Centre.