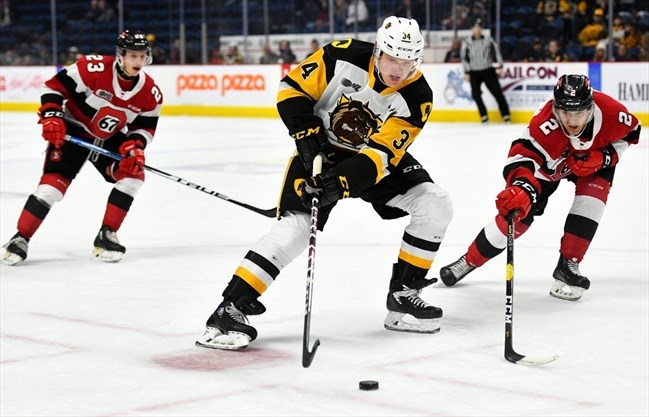 HAMILTON, ONTARIO. Jan Mysak’s OHL debut showed a ton of promise for what is to come for the Hamilton Bulldogs the rest of the season but it didn’t end the way Hamilton would have wanted. Will Cranley recorded 27 saves and Jack Quinn picked up a hat-trick in a 5-0 victory for the Ottawa 67’s.

The first period laid the groundwork for a tremendous back and forth game which saw Zachary Roy stop 10 of 11 Ottawa shots while Will Cranley stopped all 8 Hamilton shots at the other end with both teams playing a tight checking style. As physical of a game as we’ve seen to this point in the season, the opening frame would see Kevin Bahl & Navrin Mutter drop the gloves and get the TD Place crowd into a frenzy. The ice was finally broken at 18:10 of the opening frame as Mitchell Hoelscher recorded his 18th of the season shorthanded to give the 67’s a 1-0 lead. Before the period was out Cameron Supryka would have two opportunities breaking in from the left point, the second actually finding the back of the net but not until after the horn had sounded to end the opening period.

Zachary Roy would make himself the story in the second period, stopping 14 of 15 67’s shots he faced to keep the Bulldogs firmly in the lead while Cranley turned aside 13 Hamilton shots to counter. Tempers would flare late in the period as Gavin White took a hit from Daylon Groulx that would result in the Bulldogs defenseman being stretchered off the ice. In the aftermath of the hit, Cameron Supryka would be called for instigating a fight with Groulx, coming to his teammates defense which put Ottawa on the power-play where Jack Quinn would strike at 15:16 to give Ottawa the 2-0 lead through 40 minutes.

The third period would be all 67’s, with the Bulldogs playing down their entire third defense pair for the majority of the period, the war of attrition would turn ugly for Hamilton. Jack Quinn would record his 2nd of the game and 33rd of the season shorthanded at 3:57, before Mitchell Hoelscher would add his 2nd of the game and 24th of the season on the power-play at 6:19 deflecting home a Noel Hoefenmayer point drive. The scoring would close with Jack Quinn recording his hat-trick at 15:09 of to send the home crowd home happy with a 5-0 victory over the Hamilton Bulldogs

The Hamilton Bulldogs will return to action on Monday, January 20th when the team plays their make-up game from the January 17th cancellation at Leon’s Centre in Kingston against the Frontenacs with puck drop at 7:00pm.