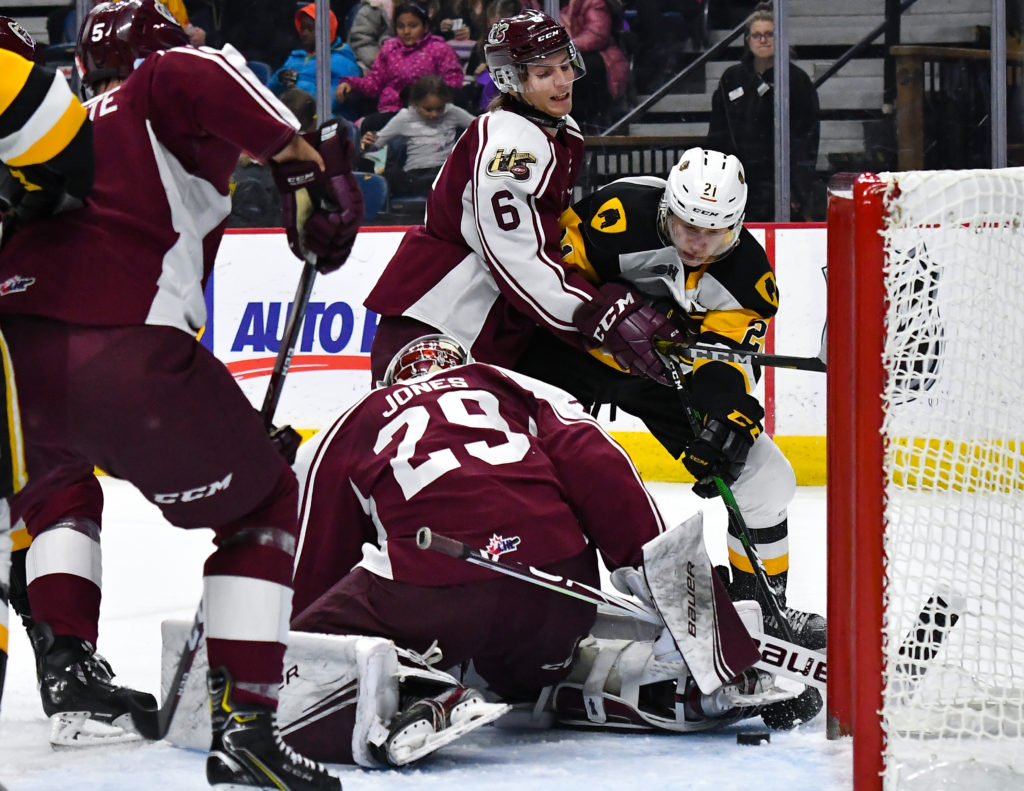 HAMILTON, ONTARIO. In the third meeting of the season between the Hamilton Bulldogs & Peterborough Petes, the Bulldogs got the start they were looking for but Hunter Jones would step up and once again hold the Dogs at bay while the Petes were able to outrace the Bulldogs offense in a 5-3 Peterborough victory.

The fans in the stands didn’t even have time to settle in and get comfy before Arthur Kaliyev scored his 28th goal of the season, just seven seconds into the game, just one second off the team record of six seconds held by captain Isaac Nurse. Assisted by Jan Jenik and Liam Van Loon, Kalyiev’s early goal marks his 52nd point of the season. At 10:48 however the Petes began their fight back as Liam Kirk had a breakaway opportunity and took advantage of it, slipping one past the pads of Zackary Roy to tie the game. The second Petes goal was credited to Declan Chisholm in a 5-on-3 power play against the Bulldogs. This shortened Jake Gravelle’s time in the box but left 54 seconds of penalty kill time for the bulldogs going into the second period. Shots on net were tied 12-12 by the end of the first, with a score of 2-1 for Peterborough.

Starting off the second period was Jan Jenik with a shorthanded goal, his 20th of the season, assisted by line mate Kaliyev, 2nd point of the night, only 47 seconds into the period. The Petes weren’t backing down though, as they responded with another pair. At 8:44, Tucker Robertson scored with an assist from Keegan McMullen, followed shortly by a goal from Liam Kirk, his second of the game. Tenison grew thick in the period as Hamilton failed to cut into the lead, resulting in a score of 4-2 for the Petes at the end of 40 minutes of play, despite several powerplay opportunities. Shots at the end of 40 were 28-18 for the Petes.

Only two goals would be scored in the third, one from each team. The Petes goal scored on a power-play by Zach Gallant at 9:02 before Tag Bertuzzi scored at 11:14 in hopes to spark a Hamilton comeback. The third period would total 14 minutes of penalty minutes alone as the second meeting between the teams in 9 days saw frustrations boil over. Despite the loss the Bulldogs still received an effort worthy of a player of the game nomination from Jan Jenik, with one goal and two assists along with 6 penalty minutes for the talented and gritty Bulldogs centre.

The Hamilton Bulldogs return to action on Saturday, November 30th when the team travels to the Sadlon Centre in Barrie to meet the Colts for the third matchup of the teams this season at 7:30.