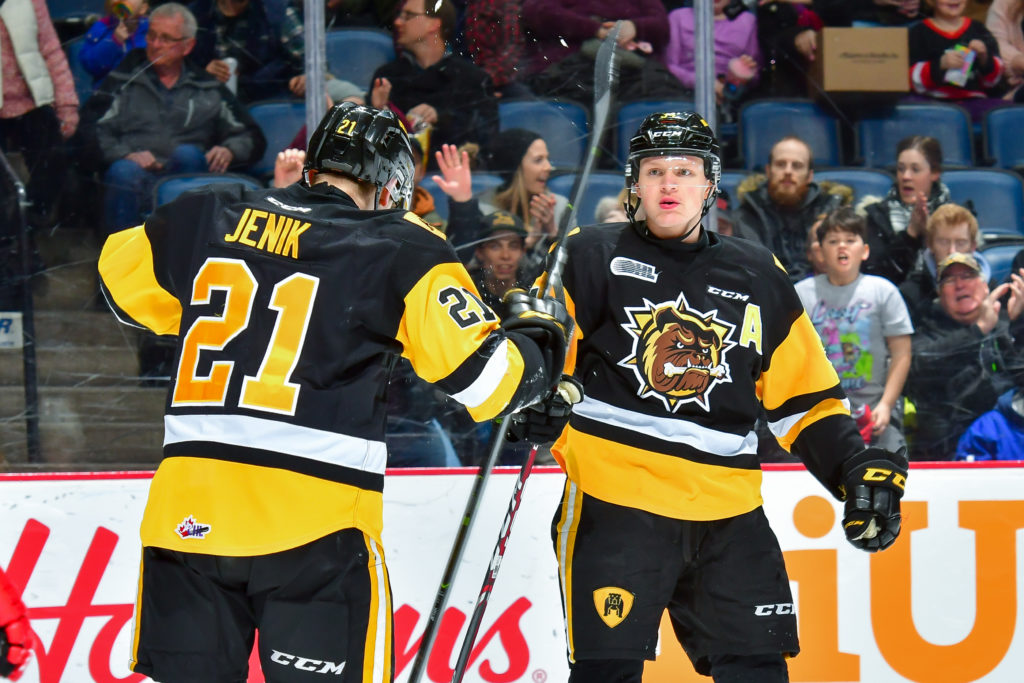 Opening the three game road trip in North Bay, the Hamilton Bulldogs’ leaned on Callender’s own Zachary Roy early in the game as the returning goaltender stopped all 10 shots he faced in the opening period and gave the Bulldogs offense the time their new line combinations needed to get going. Another Callender native, Jake Gravelle would send a seeing eye pass through the neutral zone to Jan Jenik who walked into the North Bay zone in a 2-on-0 with Arthur Kaliyev, looking off his teammate, Jenik danced past Joe Vrbetic for his 13th of the year at 17:32 of the period. From there the Bulldogs would head to the power-play where the ever-dangerous top unit would strike, Jan Jenik got the puck to the left side of the Battalion goal to Logan Morrison who found Arthur Kaliyev stationed for his 22nd of the year at 18:29. Before the period was out, Hamilton would strike again Mark Duarte stole the puck just inside the North Bay line feeding George Diaco crossing the front of the North Bay and drawing a defender and Vrbetic before dropping to Jenik for his 2nd of the game, 14th of year at 19:04, taking the 3-0 the room after 20.

The second period would see Zachary Roy step to the forefront, with the Bulldogs being outshot 15-11 in the frame, Roy would stop all 15, including a spectacular stop at the side of the net after the puck fell off a block from Payton Vescio right to a Battalion forward but Roy would split out, jamming his pad to the post, keeping the Bulldogs up 3-0. Late in the period, the Bulldogs would extend the lead once again as Jan Jenik walked into the offensive zone, eluding a trio of defenders and feeding the front of the North Bay goal to an open Ryan Winterton who scored his 5th of the season in his return from the U-17 World Hockey Challenge at 15:55. The Bulldogs would head to the break after 40 in control of the game with the 4-0 lead and Jan Jenik sitting on 4 points for the game.

North Bay would push back in the third period, as captain Brad Chenier would record his 8th of the season to break Roy’s shutout bid on a rebound lift at 4:26 of the third period but that is as close as the Battalion would get. Roy would keep the door shut from there and Jan Jenik would add one more on the power-play at 15:12 on a dart to the top shelf, recording his hat-trick in the process and finishing the game with 5 total points to snap the Bulldogs three game loosing streak, giving the team a 5-1 victory to open the longest road trip of the season.