JENIK’S FOUR POINTS NOT ENOUGH TO OVERCOME TYNAN AND ICEDOGS 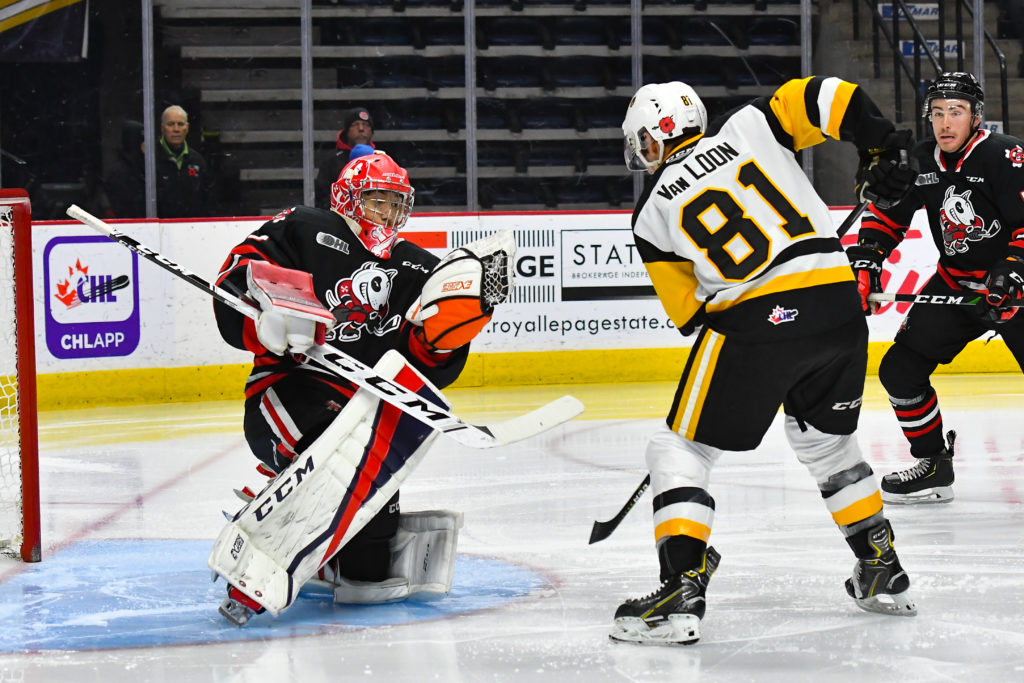 HAMILTON, ONTARIO. Jan Jenik continued to climb the OHL scoring ranks with four points on Sunday and Arthur Kaliyev scored his 21st goal of the season but it wouldn’t be enough for the Bulldogs as they dropped a 5-4 decision to the Niagara IceDogs thanks to two goals each from Ivan Lodnia & Akil Thomas and a tremendous performance from Tucker Tynan.

The first period of Sunday afternoon’s clash of Dogs may not have opened the way the Bulldogs would have wanted but before the period was out they would hold the lead. The IceDogs opened the scoring with back to back goals, first Akil Thomas would strike, arcing off the left-wing faceoff circle and finding the top corner at 8:43 before Ivan Lodnia would score on a shorthanded breakaway at 12:43. From there the Bulldogs took over, Payton Vescio at 14:39 would bank in a goal off a combination of A.J. Cook & Tucker Tynan followed by Arthur Kaliyev’s 21st of the season on the power-play from a tremendous Jan Jenik feed, his second assist of the opening period. Finally at 19:44 of the opening period Jan Jenik would take a feed from Liam Van Loon fresh out of the penalty box to record his 12th of the season and finish off a three point first period giving the Bulldogs the 3-2 lead as the teams went to the locker room.

Marco Costantini would open the second period in dramatic fashion stopping Philip Tomasino on a shorthanded breakaway and at one point in the second frame the Bulldogs would hold a 28-8 advantage in shots on goal but Niagara would fight back. First Akil Thomas would record his second of the game on another laser-beam wrist shot from the top of the left circle at 6:59 followed up by Ivan Lodnia recording his second goal of the game on the power-play at 19:50 of the period. The IceDogs would take a 4-3 lead to the locker room despite a 29-15 deficit in shots on goal.

The Bulldogs continued to control the play into the third period but Tucker Tynan stood tall including a save in a shorthanded 2-on-0 against Kaliyev & Jenik and a penalty shot stop on Liam Van Loon. At 15:11 of the third period with the IceDogs on the power-play Ivan Lodnia would take a feed from Akil Thomas, ripping the puck across the crease where Andrew Bruder would punch in his 2nd of the season. The goal marked the 5th point of the night for Lodnia and 4th for Thomas. Hamilton would continue to press despite the two goal deficit and would be rewarded at 19:11 when Logan Morrison would fight through a pair of checks to get the puck to Jan Jenik who in turn would find Tag Bertuzzi for his 7th to close the game to 5-4 but that is as close as the Bulldogs would get, with Tynan making 37 saves in the win for Niagara.

The Hamilton Bulldogs will return to action on Thursday, November 14 at 7pm when the team begins a three-game weekend road trip in North Bay against the Battalion followed by matchups against Sault Ste. Marie on Friday, November 15 at 7pm & Sudbury on Sunday, November 17th at 2pm