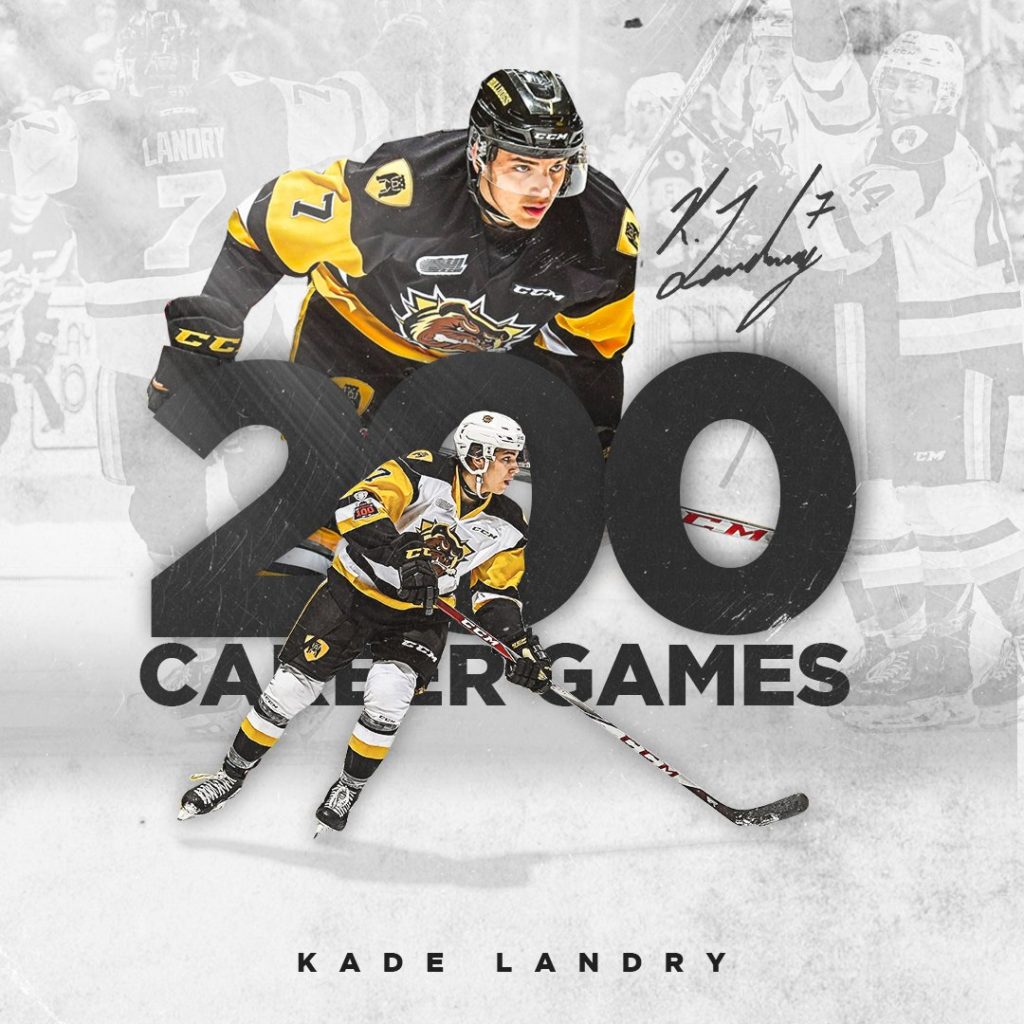 HAMILTON, ONTARIO. Hamilton Bulldogs offensively gifted rearguard Kade Landry reached a true milestone on Friday night, appearing in his 200th career OHL game, and thanks to an assist of his own and another big night from the Bulldogs’ top line, Hamilton came away with a 4-2 victory over the Kingston Frontenacs.

The 1st period at Leon’s Centre took some time to find a flow but as the Bulldogs tilted the ice in their favour, the goals started to flow. Hamilton captain Isaac Nurse would break the ice at 13:44 of the opening period, his 2nd of the season from Avery Hayes to give the Bulldogs a 1-0 lead. Unfortunately for the captain, he would come out of the game before the end of period and not return. Despite Nurse’s absence, the Bulldogs kept rolling in the opening frame, Arthur Kaliyev would fire his 12th of the season on a bullet from the top of the right circle, assisted by Kade Landry and Jan Jenik to extend the lead to 2-0 at 15:06. Liam Van Loon would further pile on at 19:56, with the Bulldogs on the power-play picking up an Arthur Kaliyev rebound and tucking past Ryan Dugas for his 1st of the season, giving the Bulldogs a 3-0 lead after 20 and a 15-4 advantage in shots.

In the second a parade to the penalty box ensued, with Hamilton and Kingston trading man advantage situations. Jan Jenik nearly extended the lead 4-0 on a short-handed break and Zachary Roy was standing tall in the Bulldogs goal until Lucas Peric launched a blast from the Kingston point for his 1st of the year bringing the game to 3-1. Just over a minute and a half later, Zayde Wisdom would cash in on a 2-on-1 with Jordan Frasca to bring the Frontenacs within one at 17:04, which is where the game would stand after 40 minutes.

The third period would see the Frontenacs get their opportunity to tie the game, a 5-on-3 near the midway point of the period. Roy would make back to back highlight reel stops on Shane Wright and Jake Murray to keep the Bulldogs ahead by a goal. Roy’s strong performance would continue late into the period as he would make a pair of standout saves on Lucas Rowe to preserve the lead. With Ryan Dugas pulled, and the Fronts pressing George Diaco would jump on a loose puck, find Jan Jenik who in turn found Arthur Kaliyev for his 13th of the season to put the game on ice, a 4-2 Bulldogs win.

The Hamilton Bulldogs will close their weekend with a meeting with the Ottawa 67’s at TD Place on Sunday at 2pm.