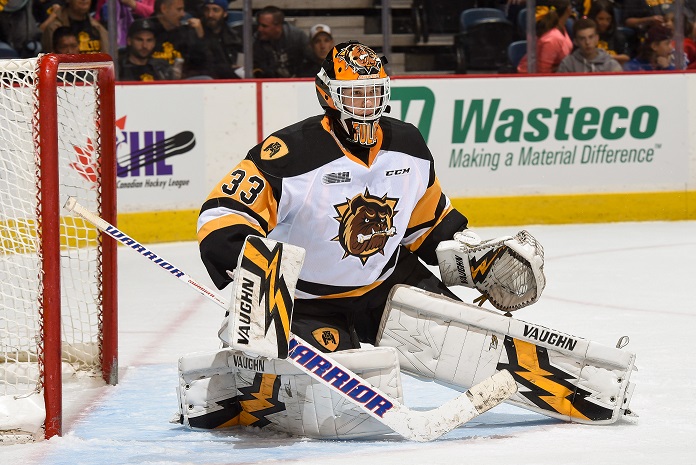 No other goaltender has more wins in a single season while wearing a Hamilton Bulldogs jersey than Kaden Fulcher.  That includes the almost three seasons the team has been in the Ontario Hockey League along with the years the team was in the American Hockey League.

Fulcher recorded his 30th win Friday March 1st in a 5-4 overtime victory over the Niagara IceDogs. His record this season is 30-15-3-2. His Goals Against Average is 2.83 and his Save Percentage stands at .901.

The 19-year old from Brigden, ON cemented his status as the Bulldogs #1 goalie when he returned from the Detroit Red Wings 2017 Summer Development Camp and then Detroit’s Rookie Camp. The Wings signed the free-agent to a 3-year entry level deal in early October 2017.

The top goalies from the Bulldogs AHL days were Cedrick Dejardins who registered 29-wins in the 2009-2010 season and Yann Danis who was in the nets for 28 victories in the 2004-2005 season.

The Bulldogs are on the ice Saturday March 3rd when they host the Oshawa Generals.