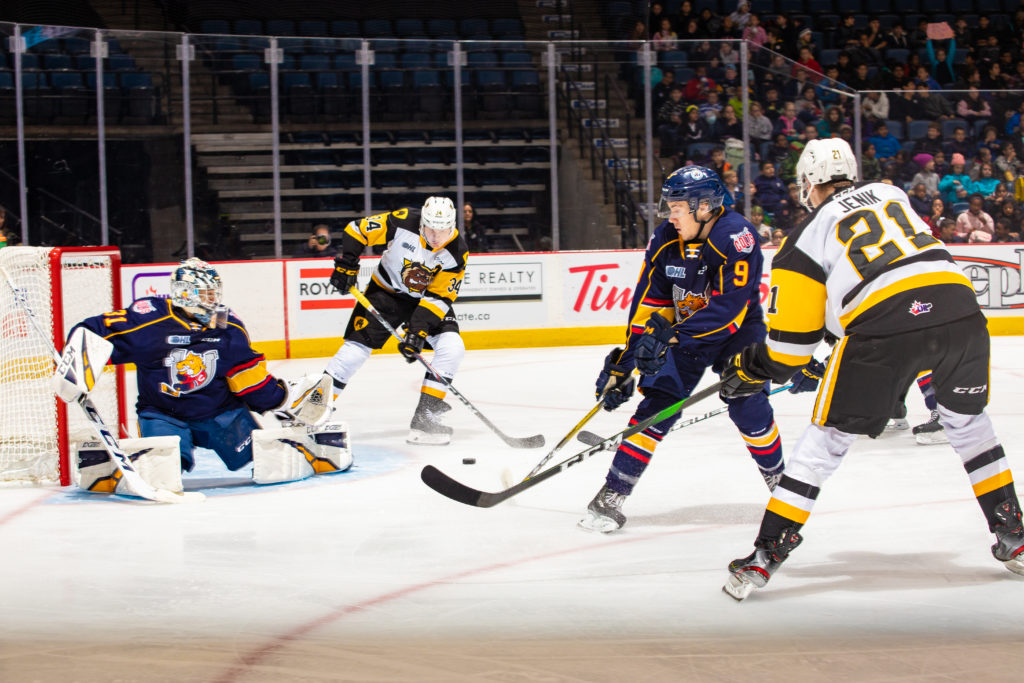 HAMILTON, ONTARIO. In a special Wednesday morning start for School Day Game, Arthur Kaliyev regained his share of the OHL lead in both goals and points while Jan Jenik stayed hot with three points of his own, Mark Duarte recorded his first point in the OHL and Marco Costantini recorded 28 saves to take a 5-4 win a back and forth battle with the Barrie Colts.

The first period of the contest in front of the loud crowd of 5,476 was all Bulldogs, Arthur Kaliyev scored his 16th goal of the season, regaining his share of the OHL goal lead, at 7:31 of the opening period. Cameron Supryka got the puck to Jan Jenik who avoided two Colts defenders along the side boards and drove the net, showing great patience to feed Kaliyev who made no mistake giving the Bulldogs the 1-0 lead. Hamilton’s advantage would be doubled at 15:02 of the period when Logan Morrison would find himself alone with the puck in front of an open Colts’ goal converting after Tag Bertuzzi’s backhand off an Arthur Kaliyev slap pass was stopped by Barrie defender Chris Cameron. The power-play goal was Morrison’s 6th of the season. Before the period was out Marco Costantini would flash heroics once again, making three spectacular stops to preserve the Bulldogs advantage to the intermission, including stopping Matej Pekar in a two-on-one.

Barrie would find the score board in the second period, an out pass from the Bulldogs’ defensive zone was poached by Tyson Foerster who converted his 12th of the year at 6:38 to cut the Bulldogs lead but just under three minutes later the Bulldogs would respond. Arthur Kaliyev would block a Colts’ point drive and direct the puck to Jan Jenik who drove the Barrie zone and beat Jet Greaves to re-establish the two goal advantage for the Bulldogs at 9:34, the assist gave Kaliyev his third point of the night and moved him back into a tie for the league scoring lead. The Colts’ would half the lead again before the end of the frame with Tyson Foerster picking up his 2nd of the game on the power-play alone at the side of the net backhanding the puck into the top shelf to make it 3-2, which is how the game would stand after 40 minutes.

In the third, the teams would trade goals twice, first Jan Jenik would strike for his 2nd of the game and 9th of the season after Mark Duarte stole the puck in neutral ice and drove Greaves’ goal, Jenik would pick up the rebound and lift it in at 6:36. That goal would be countered by Jacob Tortora with the Colts on the power-play at 7:57, jamming home a Jason Wilms net drive for his 1st of the year and making it a 4-3 score. Just 28 seconds later, Kade Landry would skate down the left wing side and catch Greaves cheating off his post for his 2nd goal of the year to give the Bulldogs a 5-3 lead. The Colts would get one more from Pekar at 16:05 but that is as close as they would get, the Bulldogs would take the 5-4 victory.

The Hamilton Bulldogs return to action on Friday, November 1st when they travel to Mississauga to meet the Steelheads for a 7pm start, and then return home on Sunday to host the Ottawa 67’s for a 2pm meeting.