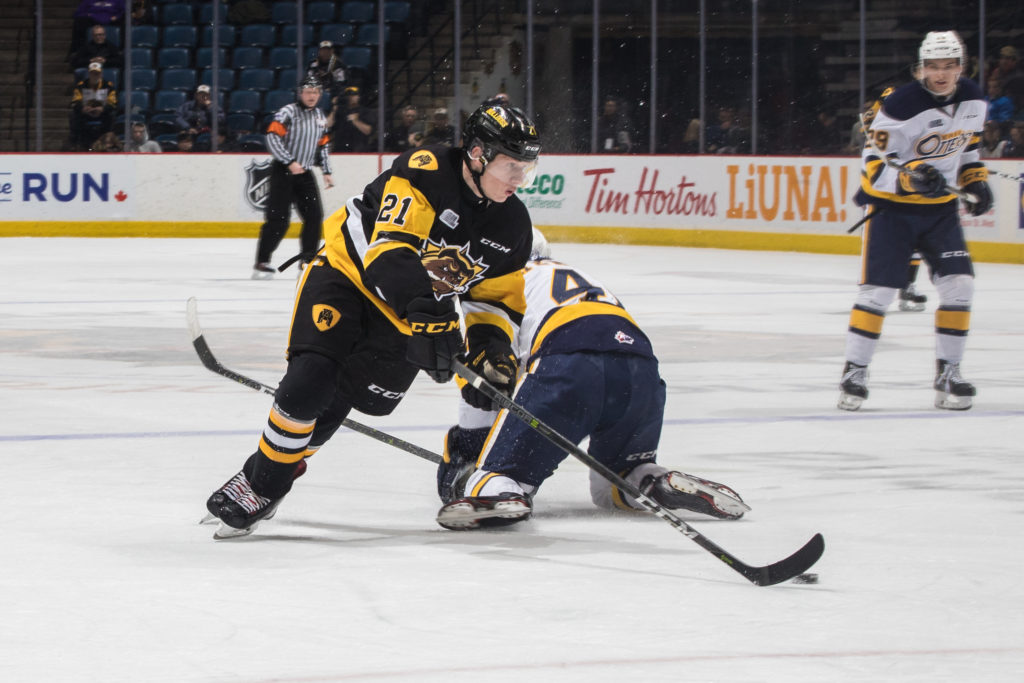 The Hamilton Bulldogs found themselves chasing the game early as Barrie’s Matej Pekar scored on an early Colts’ power-play off a Tyson Foerster steal to record his 8th of the season at 7:17 of the opening period. The Bulldogs would find themselves in penalty trouble near the end of the first period as Ryan Humphrey was ejected from the game on a match penalty for slew footing, giving the Colts a 5-minute major power-play. The Bulldogs’ penalty kill would rise to the occasion killing off the extended man advantage before Arthur Kaliyev would locate Jan Jenik off the back boards to tie the game at 1-1 on Jenik’s 4th of the season.

The second period was a wild back and forth of goal scoring, the Bulldogs would drive out to a 3-1 advantage on power-play goals from Arthur Kaliyev, his 9th from Jenik & Logan Morrison before Morrison would pot his 2nd of the season from Tag Bertuzzi & Nathan Staios. The Colts would quickly mount a comeback, tieing the game at 3-3 on goals from Tyson Foerster, his 6th of the season and 1st of the game followed by Riley Piercey recording his 3rd of the season and leaving the game back at square one at 15:23. Hamilton would pull ahead again, Jake Gravelle recorded his first of the season from Logan Morrison at 18:16 but once again the Colts would pull even with 3.3 seconds left in the period, as Tyson Foerster picked up his second of the game to send us to the locker room at 4-4 after 40.

The third period would prove to be the Bulldogs shining moment, as Arthur Kaliyev would score one of the most spectacular goals in Bulldogs history, lifting the puck on the blade of his stick before tossing it over Barrie’s Artur Silovs to give the Bulldogs back the lead at 3:56. Kaliyev’s second of the night was followed quickly by Tag Bertuzzi’s 3rd of the season at 5:05 to extend the lead to two before Luke Bignell would strike at 14:13 to limit the lead to 6-5  but that is as close as the Colts would get. Jan Jenik would score into the empty net from Kaliyev, both forward’s 4th points of the night to seal a 7-5 Bulldogs victory.

The Hamilton Bulldogs return to action on the road next weekend with games in Peterborough on Thursday, October 17th, Kingston on Friday October 18th & finishing the weekend on Sunday October 20th in Ottawa.