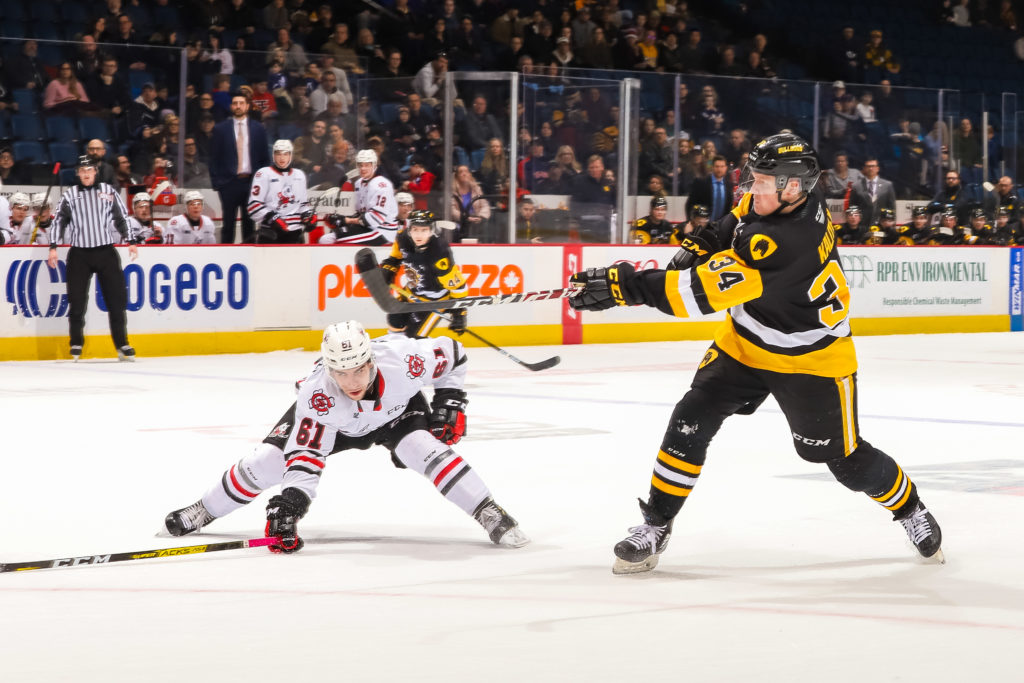 HAMILTON, ONTARIO. Arthur Kaliyev scored his 115th & 116th goals in his Ontario Hockey League career, tying and then passing Matt Strome for most goals in Hamilton Bulldogs franchise history. Kaliyev was joined by Jan Mysak, scoring his first OHL hat-trick, all in the first period, and a four-point night from Nathan Staios in a dominating 9-4 victory over the Niagara IceDogs.

A busy start to this Saturday afternoon game against the Niagara IceDogs. The score at the end of only 20 minutes was 6-2 in favour of the Hamilton Bulldogs. A hattrick for Jan Mysak as he scored his, fifth, sixth and seventh goals of the season in the first period alone, including a highlight reel marker as he danced past veteran defenseman Elijah Roberts before turning across the front of the Niagara goal and tucking the puck into the back of the net. Joining Mysak in the goal scoring was Isaac Nurse with a short-handed goal from a dump pass by Kade Landry, and Arthur Kaliyev with two of the six goals. With his 34th goal of the season, Kaliyev is now the OHL Hamilton Bulldogs franchise goal leader with a total of 116 goals, with that history making goal coming off a classic Arthur Kaliyev style play. Taking the pass from Nathan Staios at the top of the left-wing circle and lasering the puck past Andrew MacLean with just 29 seconds left in the opening period. Going into the second period with a comfortable lead, the Bulldogs would remain hungry for more offense.

The excitement would continue into the second period as the Bulldogs broadened their lead by another two goals, finishing the period with a score of 8-2. After being under review, a good goal was declared as Nathan Staios, his 3rd of the season and seventh goal of the game with assists from Logan Morrison and Jake Gravelle off a long shot from the left point which would knuckle into the Niagara goal off a defender. Scoring the eighth of the game was Mark Duarte with an unassisted goal for his first OHL career goal, coming as he twisted out front of the Niagara net collecting the puck and unloading a shot past the sprawling Niagara netminder MacLean. Despite out shooting the Bulldogs 22-17 after 40, the IceDogs would find themselves 6 goals behind going into the last 20 minutes of play with Hamilton putting on a full 200-foot effort.

The Bulldogs kept up the hard work throughout the third scoring one more goal and only allowing two. Final score being 9-4. The goals in the third for Niagara were both scored by Elijah Roberts giving him his first, and his second goals of the season. The solo goal for the Bulldogs in the third was scored by Ryan Humphrey assisted by Cameron Supryka and Michael Renwick, Humphrey’s second goal of the season. A true team performance today by the Bulldogs as 14 players recorded at least one point in the 9 goals scored. With Mysak totaling five points this game, Kaliyev & Staios totaling four each in true star performances for the young & promising Hamilton squad.

The Hamilton Bulldogs will return to action closing out the three-in-three weekend on the road in Oshawa, taking on the Generals on Sunday, February 2nd at 2:05pm.