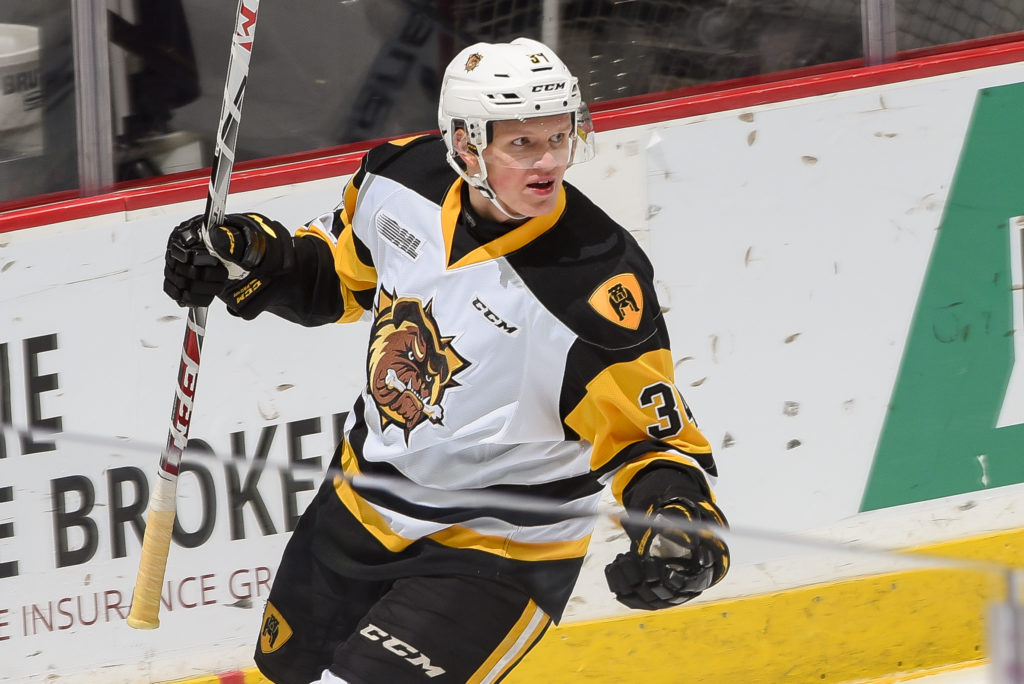 HAMILTON, ONTARIO. The Hamilton Bulldogs erased some negative memories of their home opener and thanks to four goal from Arthur Kaliyev and Marco Costantini’s 37 saves, the team recorded its 3rd win of the season beating the Erie Otters 4-1, Costantini’s first win in the OHL.

Arthur Kaliyev opened the scoring, recording his 5th goal of the season at 2:12 of the opening frame, take a feed on the left-wing side from Jan Jenik and shelving the puck short side past Otters goaltender Daniel Murphy. From there Marco Costantini took over, with the Bulldogs taking back to back penalties, their rookie netminder would stonewall all 11 Otters shots he would face in the first period, allowing the Bulldogs to take their 1-0 advantage to the locker room.

The second period would open up with Chad Yetman getting a short break in at Costantini who would deny the Otters forward setting the stage for the Bulldogs to extend the lead. Kaliyev would record his 2nd of the game & 6th of season at 7:57 of the period, following a 2-on-1 breaking down with Jan Jenik, the Czech center would send the puck back on goal where Liam Van Loon would free it, allowing Kaliyev to jump on it giving the Bulldogs the 2-0 lead. Kaliyev’s third of the game would come on the power-play, with Kurtis Henry in the box the Bulldogs would set up in the Otters’ zone. Jenik walked in from the left point, finding Logan Morrison at the bottom of the left circle who would hit Kaliyev tape-to-tape for the finish, cracking the league’s top-rated penalty kill and giving Kaliyev his hat-trick at 16:51 of the period. Marco Costantini would do his part, stopping all 25 shots he faced through the end of the second frame.

The third period would see the Otters hit a pair of goal posts but Costantini would continue to stand strong, highlighted by a great save from the slot on a wide-open Austen Swankler. Arthur Kaliyev would extend the lead for the Bulldogs at 9:14 of the third period as Jan Jenik would spring Liam Van Loon who was stopped by Daniel Murphy but Arthur Kaliyev’s rebound blast would not be denied, giving the Bulldogs sniper his 8th of the season and 4th of the night. Chad Yetman would break Costantini’s shutout bid with just 1:21 left in the game but that is as much offense as the Otters would find. Marco Costantini would earn his first OHL victory, to go along with Kaliyev’s four goals and Jenik’s four assists in the victory.

The Hamilton Bulldogs will next see action on Thanksgiving Monday, October 14th, as the team hosts TiCats Day against the Barrie Colts at 2pm.