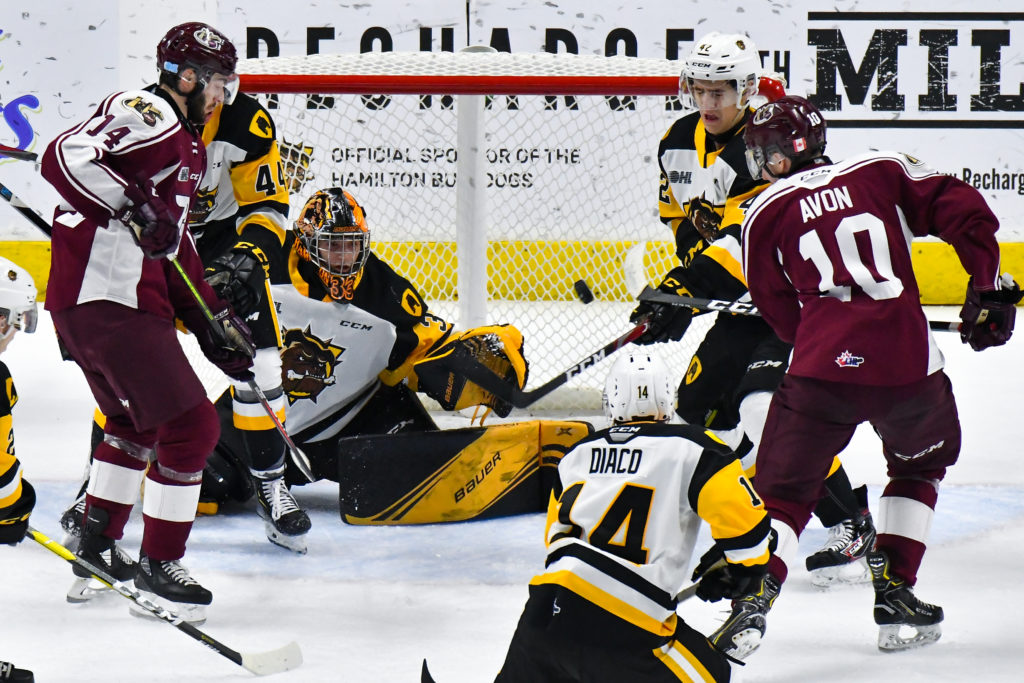 HAMILTON, ONTARIO. Arthur Kaliyev recorded a pair of goals to reach 30 for the 3rd time in his 3 OHL seasons but it wouldn’t be enough as Mason McTavish recorded a hat-trick and Tye Austin was nothing short of brilliant stopping 39 of 43 Hamilton Bulldogs shot in the 7-4 Peterborough win.

It was a wild opening 20 minutes at the Peterborough Memorial Centre as the Hamilton Bulldogs would open the scoring on the team’s first shot of the game as Arthur Kaliyev would find the top right corner exactly 4:00 into the game for his 29th of the season but the lead would be short lived. John Parker-Jones would record his 5th of the season just 0:19 later tipping in a Jacob Paquette point drive to tie the game. The Petes would feed off that goal with Mason McTavish scoring his 16th of the season alone in the slot from Max Grondin & Cameron Butler at 6:19 before Nick Robertson would further extend the lead on his 22nd of the season from Hudson Wilson & Keegan McMullen at 8:10 to give the Petes a 3-1 lead. The Bulldogs would cue an early game comeback, Tag Bertuzzi would record his 13th of the season after Logan Morrison fed Avery Hayes at the bottom of the right circle with Bertuzzi jumping on the rebound to cut the lead to 3-2. With the Bulldogs on a 5-on-3, Nathan Staios would set the puck on a tee for Arthur Kaliyev to hammer off the back crossbar, his 30th of the year and 2nd of the night, tying the game at 13:55, Avery Hayes would pickup his 2nd assist of the night on the goal. The Petes would re-gain the lead before heading to the locker room however as Mason McTavish would record his 2nd of the game, 17th of the season, at 18:29 to nudge the Petes ahead after 20 minutes of play.

The second period would calm down from the goal scoring of the first with both goaltenders settling into much more of a groove, Tye Austin was spectacular early in the period turning away several high end chances for the Bulldogs while Marco Costantini would see his shining moment, denying Zach Gallant on a breakaway. The only goal of the period would come from the Petes, with Brady Hinz serving a 5-minute major penalty for cross-checking, Nick Robertson would find the puck on his stick in the slot, spinning around he would backhand it into top shelf to give the Petes a 5-3 lead at 17:09. Logan Morrison appeared to get the Bulldogs a goal back just moments later but after an extended review it was ruled, controversially, that the puck was kicked into the goal. After 40 minutes, the Bulldogs would hold a 29-23 advantage in shots but trail 5-3.

Third period would see the Petes pull away, Zach Gallant would extend the lead to 6-3 at 4:45 of the final frame banking in a goal off Marco Costantini before Mason McTavish would record his hat-trick goal at 14:41 to make it a 7-3 Peterborough lead. With just 0:06 remaining Ryan Winterton would give the Bulldogs something to build off of as he would record a power-play goal, his 6th of the season, to make it 7-4 which is where the final would stand.

The Bulldogs are next in action visiting the Kitchener Rangers on Friday, December 13th with a 7:30 puck drop. The Bulldogs will finish out the weekend at home, Saturday, December 14th for the beloved Teddy Bear & Toque Toss game, vs. the Kingston Frontenacs with puck drop at 4:00pm.