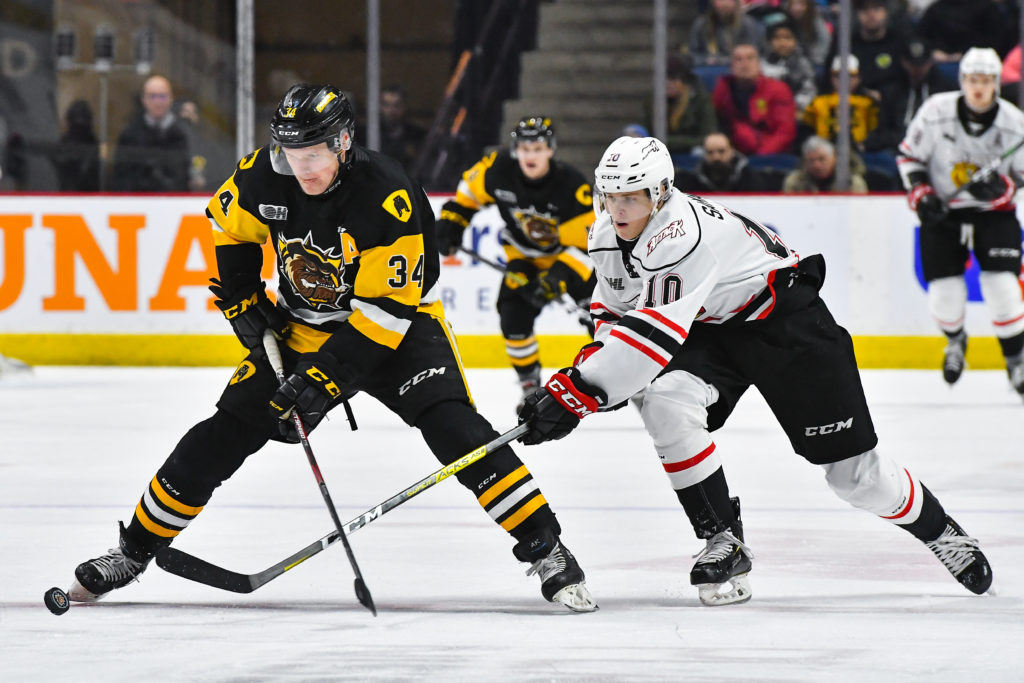 HAMILTON, ONTARIO. Arthur Kaliyev recorded four assists but it wasn’t quite enough as the Owen Sound Attack received three point efforts from Adam McMaster, Kaleb Pearson & Matthew Struthers in a 7-6 overtime thriller. The Bulldogs power-play went 4 for 5 on the night as Hamilton once again showed they can stand and swing with some of the best teams in the powerhouse Western Conference.

The Hamilton Bulldogs opened the Wednesday night clash on a strong note as just 3:50 into the game, as Lawson Sherk fed Ryan Winterton on the right boards who hit Cameron Supryka flying into the zone on the left-wing side beating Mack Guzda for his 3rd of the season giving the Bulldogs the 1-0 lead. From there Zachary Roy would make himself the story of the opening period, stopping Ethan Burroughs point blank with a tremendous glove save before stopping Aidan Dudas on a net front tip later in the opening frame with a brilliant kick save to keep the Bulldogs up 1-0 through 20 minutes.

The second period would see an explosion of offense, totaling 7 goals in the period with the Bulldogs initially bubbling their lead to a pair as Jake Gravelle would record his 4th of the season on the power-play from Kade Landry and Ryan Winterton at 2:52 but the Attack would quickly mount a comeback. Carter Robertson scored his 10th of the game and 1st of the night at 5:32 from Matthew Struthers & Kaleb Pearson to get Owen Sound on the board before Robertson would tie it with his 11th of the season & 2nd of the night at 6:03 from Struthers & Stepan Machacek. At 9:03 the Attack momentum would continue, Sergey Popov on the power-play would record his 17th of the season from Struthers, his 3rd assist of the game, and Bradey Lyle to give Owen Sound the 3-2 lead. Nathan Staios would respond on the power-play, his 6th of the year, for the Bulldogs at 12:31 with a bullet from the point off a setup from Arthur Kaliyev & Jan Mysak tying the game before Deni Goure would put the Attack back ahead on a power-play goal of their own recording his 11th of the year on a cross-crease pass from Kaleb Pearson at 14:54 putting Owen Sound back up 4-3. The Bulldogs would respond again, on the power-play once again as Arthur Kaliyev and Kade Landry would work the puck from the slot to the right side for Logan Morrison who would walk down into the circle and beat Guzda to tie the game 4-4 at 17:40 sending the game to the second intermission knotted.

The third period would see the offensive roll continue for both sides, Andrew Perrott & Sam Sedley would feed Adam McMaster who would take the puck just inside his blueline and carry into the Bulldogs zone beating Zachary Roy to put the Attack ahead again, 5-4, at 9:50. Hamilton would respond at 14:55 on the power-play once more as Arthur Kaliyev would take a pass from Nathan Staios on the top of the left circle and fire a shot that Isaac Nurse would find the rebound from, depositing his 11th of the season tying the game. At 18:38, Hamilton would take their first lead since early in the second as Arthur Kaliyev would drive the net and after Guzda stopped his initial shot, Tag Bertuzzi would collect the rebound and score his 24th of the year. The Attack would get a late power-play and once again tie the game as Kaleb Pearson recorded his 25th of the year on a tip of a Sergey Popov shot at 19:35 sending the game to overtime.

The extra frame took just 31 seconds as Tag Bertuzzi would steal the puck in the Owen Sound zone and ring the goal post before Adam McMaster would collect the puck and race up the right wing scoring his 2nd of the game and 18th of the year to give the Attack a thrilling 7-6 victory.

The Hamilton Bulldogs will return to action travelling to Michigan to visit the Flint Firebirds on Friday, February 29th with a 7:00pm start before a trip to Saginaw to take on the Spirit on Saturday, February 29th at 7:00pm.