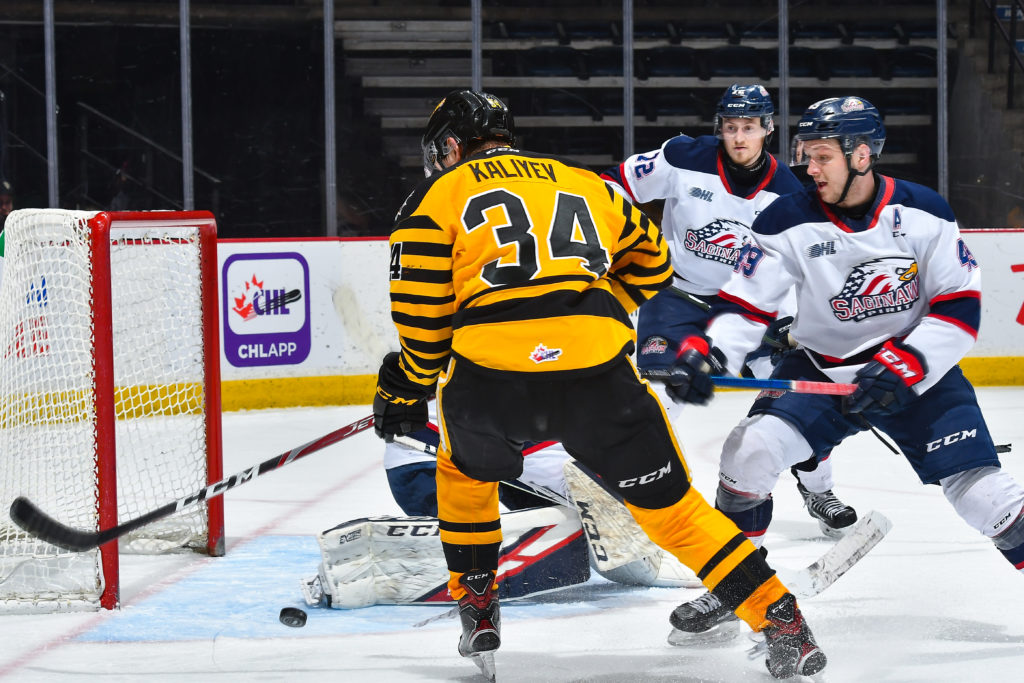 HAMILTON, ONTARIO. Arthur Kaliyev’s charge to re-write the Hamilton Bulldogs record books continued on Saturday as he recorded his 248th career OHL point on his 44th goal of the season just 1:09 into the game touching off a tremendous back and forth contest. In addition to Kaliyev making history Nurse, Diaco, Renwick, Vescio & Winterton would each record two points. It wouldn’t be enough however as each of Ilya Solovyov & Bode Wilde would record a pair of goals in the Saginaw 8-6 win.

After only 20 minutes of play, the score at the end of the first period was 4-3 for the visiting Saginaw Spirit. Scoring first was Saginaw’s Ilya Solovyov only 54 seconds into the game. Shortly after, Arthur Kaliyev followed with his 44th goal of the season, after Isaac Nurse & Jan Mysak combined to battle the puck loose to him in front, making him the Bulldogs OHL franchise points leader at 248 points. Nurse would then record his second point of the period with the Bulldog’s second goal at 4:12, his 15th of the year, banking the puck off two Saginaw defenders with assists going to Kade Landry and Payton Vescio. The Bulldogs held the 2-1 lead until Dalton Duhart tied it at 7:11 with assists from Davis Codd and Camaryn Baber. Saginaw would follow up with two more to extend the lead, Damian Giroux’s 43rd at 9:30 from Perfetti & Goldowski and Solovyov’s 2nd of the game and 7th of the season from Millman & Perfetti to lead 4-2. The Bulldogs would respond with a great shot from George Diaco, his 6th of the year from Ryan Winterton and Michael Renwick. Headed into the second period, the Bulldogs would have 1:26 of a penalty to kill before they could press the attack to Saginaw’s end again.

The second was not the period the Bulldogs hoped for as they finished trailing by two with a score of 7-5. Scoring early in the period for Saginaw was Danny Katic at 3:37. Answering that goal for the Bulldogs was Tag Bertuzzi with his 25th of the year to spark some energy for the team in the second. Assisting Bertuzzi’s goal was Avery Hayes and Bradey Johnson. Saginaw’s, Bode Wilde recorded two goals back to back with assists from Jake Goldowski at 12:15 and another from Damien Giroux at 14:33 to extend the lead to 7-4. Tightening the goal gap from 3 to 2 for the Bulldogs was Navrin Mutter with a goal at 16:39, his 8th of the year, assisted by Diaco and Renwick to finish off the period. Still looking strong, the Bulldogs would take the intermission to re-group and figure out a way to pull through in the final period of the game.

Despite fighting their hardest to take points out of the game, Saginaw fought harder to protect it. Finishing the game with a final score of 8-6 for the visiting team. Giving the Bulldogs some life late, was Lawson Sherk, who scored his 5th of the year on a tremendous tip from a Payton Vescio shot and Ryan Winterton picking up the second assist, both who recorded two points tonight. Sherk scored at 14:30 closing the gap to only one with lots of time left. Unfortunately, a late penalty call at 19:19 led to one more safety goal for Spirit. The final goal of the game was scored by Cole Coskey at 19:39, his 33rd of the year from Jenkins & Millman to ice the game and halt the Hamilton comeback.

The Hamilton Bulldogs will return to action visiting the Kingston Frontenacs on Friday, March 13th at 7:00pm before returning home for back to back games hosting the Mississauga Steelheads on Saturday, March 14th at 7:00pm and the Sudbury Wolves on Sunday, March 15th at 2:00pm.