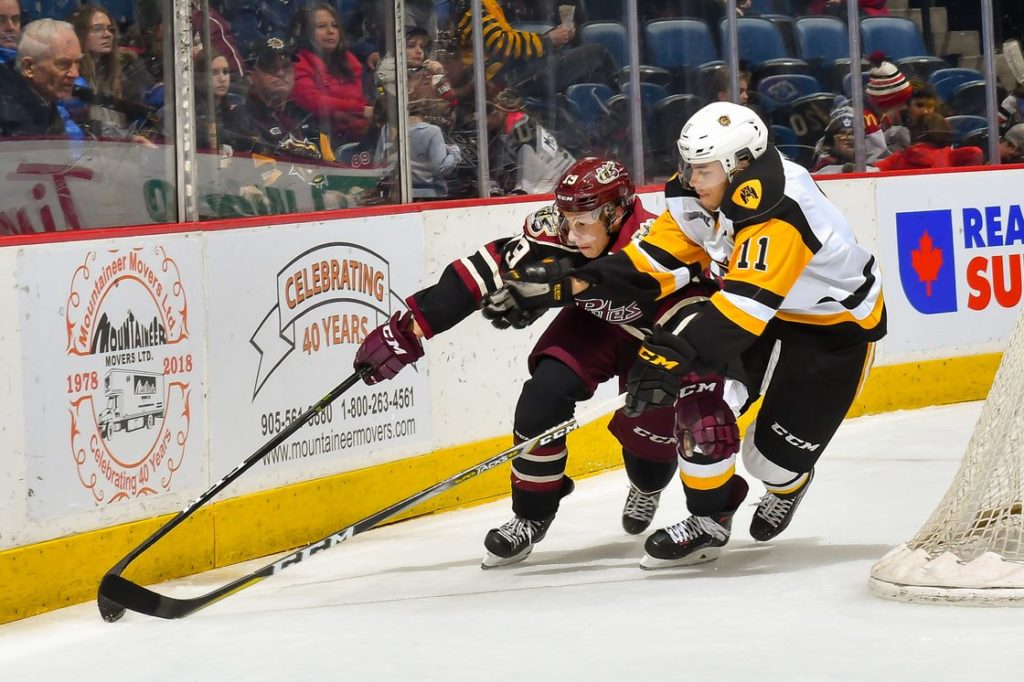 HAMILTON, ONTARIO. The Peterborough Petes waited almost a month into the 2019-20 OHL season for their home opener and nearly had it spoiled by Arthur Kaliyev and the Hamilton Bulldogs.

Marco Costantini had another strong night in the Bulldogs goal and began early by stopping all nine shots he faced in the 1st period, while the Bulldogs offense found its’ rhythm. Early back to back power-plays wouldn’t strike for the Bulldogs despite the work of Nathan Staios out high to allow traffic to amass and distribute low but Hamilton would strike before the end of the frame. Arthur Kaliyev would track the puck to the back boards stealing away a d-to-d pass for the Petes, his pass found Liam Van Loon who quickly dished to Jan Jenik for his 6th goal of the season to give the Bulldogs the 1-0 lead at 15:07 which they would take into the locker room after 20 minutes.

In the second period, Costantini and the Bulldogs defense would see an onslaught as the Petes would throw 22 shots at the Hamilton goal and receive three straight power-plays in the opening 10 minutes of the period. The Bulldogs would keep Peterborough at bay until 14:13 of the second period when Chad Denault would strike for his 2nd of the season, followed by Mason McTavish recording his 7th after following a bouncing puck through a faceoff scramble at 16:02 giving the Petes a 2-1 lead through 40 minutes.

In the third period Peterborough would control the opening minutes, having the Bulldogs pinned until Kade Landry tossed the puck high out of the zone, finding a streaking Liam Van Loon on the left wing side on a 2-on-1 with Kaliyev, Van Loon would look set Kaliyev perfectly for a one-timer potting his 11th of the season, his 7th in the last 3 games, and giving Kaliyev the OHL lead with 21 points on the season at 8:09 tying the game at 2-2. Nearly five minutes later the Bulldogs would find themselves on a power-play where they would take the lead, Staios point shot would be deflected by Tag Bertuzzi before falling dead at the side of the net for Logan Morrison to pot his 3rd of the season at 12:54, however the lead wouldn’t last. Peterborough would score goals 36 seconds apart, Nick Robertson’s 12th of the year & Zach Gallant’s 3rd gave the Petes a 4-3 they wouldn’t relinquish despite Costantini’s 34 saves.

The Hamilton Bulldogs return to action Friday night in Kingston at 7pm before finishing the weekend Sunday in Ottawa in a 2pm matinee start.