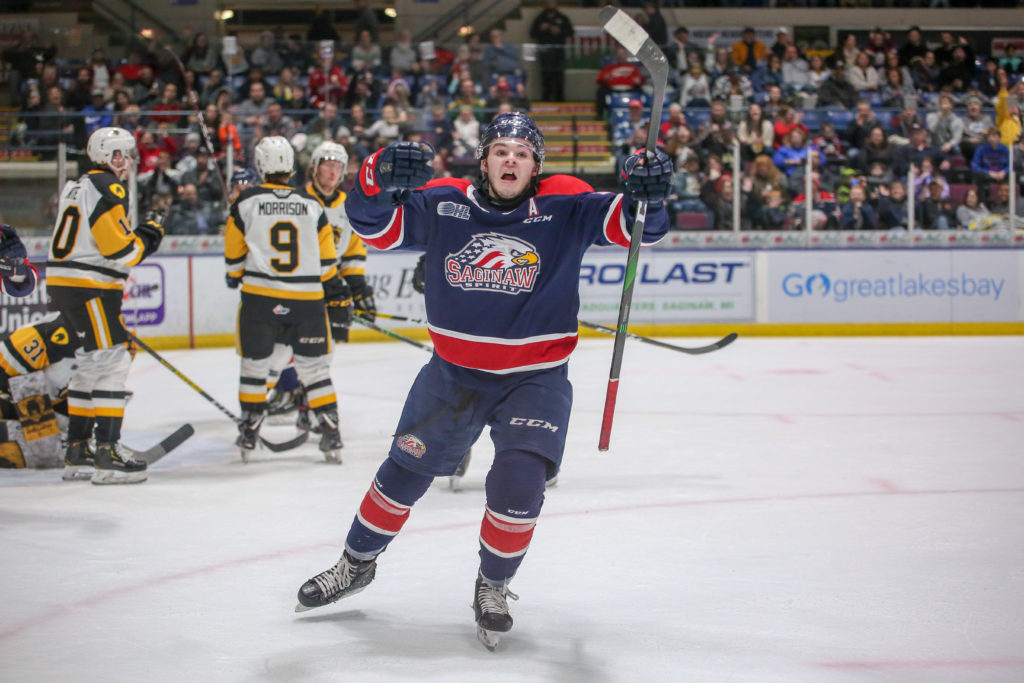 HAMILTON, ONTARIO. Arthur Kaliyev recorded the 247th point of his OHL career, tying former Hamilton Bulldogs captain Matt Strome for the all-time franchise record in points but the moment would be soured as D.J. Busdeker recorded four goals while 11 Spirit skaters scored at least a point in an 8-2 victory for Saginaw.

The first period at the Dow Event Centre in Saginaw would simply belong to D.J. Busdeker as he would open the scoring just 57 seconds into the frame Damien Giroux & D.J. King, his 1st of the night and 19th of the season and would quickly double his output as Busdeker would score his 2nd of the night just 23 seconds later at 1:20 from Reilly Webb giving the Spirit a 2-0 lead before the Bulldogs could get their skates under them. Hamilton would push the pace for the majority of the period from there, leading to a strong cycle shift from the Van Loon, Morrison, Hayes line and scoring chances for each of Kaliyev, Mysak & Bertuzzi however Tristan Lennox would stop all 12 shots he faced in the first period. Before the frame was out D.J. Busdeker would record his hat-trick goal on a backhand in the slot pushing his season total to 21 and giving Saginaw a 3-0 to take to the locker room at the first intermission.

The Bulldogs would move Marco Costantini in between the pipes to open the second period and it seemed to calm the team as the game would be scoreless for the first half of the period until Arthur Kaliyev would record his 247th career point for the Bulldogs, tying Matt Strome for the all time franchise lead, springing Jan Mysak on a shorthanded breakaway who would best Tristan Lennox for his 15th of the season at 10:38 bringing the Saginaw lead to 3-1. On the same Saginaw power-play Busdeker & Mason Millman would set Blade Jenkins at the top of the left-wing circle who would rip a shot high over Costantini to give Saginaw the three-goal lead back at 11:09. Ryan Suzuki would close the second period out at 16:46 banking the puck off Cameron Supryka’s skate for his 17th of the season giving Saginaw a 5-1 lead into the second intermission.

The third period would see the rigors of the weekend mount as the Bulldogs would surrender three power-play goals in the final 20 minutes with Ryan Suzuki scoring his 2nd of the game & 18th of the season at 8:15 from Cole Coskey & Bode Wilde followed by Jake Goldowski’s 14th of the year from Mason Millman & Blade Jenkins at 8:55 and D.J. Busdeker’s 4th of the game & 22nd of the season from Millman & Jenkins at 15:53. There was a ray of hope for the Hamilton Bulldogs moving forward in the third period, as with the team down 7-1 at the time and on the power-play Kade Landry would work the puck to the top of the right-wing circle for Jake Gravelle who fed Ryan Winterton in the middle of the blue line, Winterton would walk down to the top of the slot and rip a wrister over Lennox’s glove for his 12th of the season 13:46. The Bulldogs would fall 8-2 on the night but saw a glimpse of what could be in the very near future with the late Winterton goal.

The Hamilton Bulldogs will return to in Peterborough for the seventh and final matchup of the regular season with the Petes on Thursday, March 5th at 7:00pm before hosting the Saginaw Spirit on Saturday, March 7th at FirstOntario Centre for the Bulldogs Foundation Game at 4:00pm.