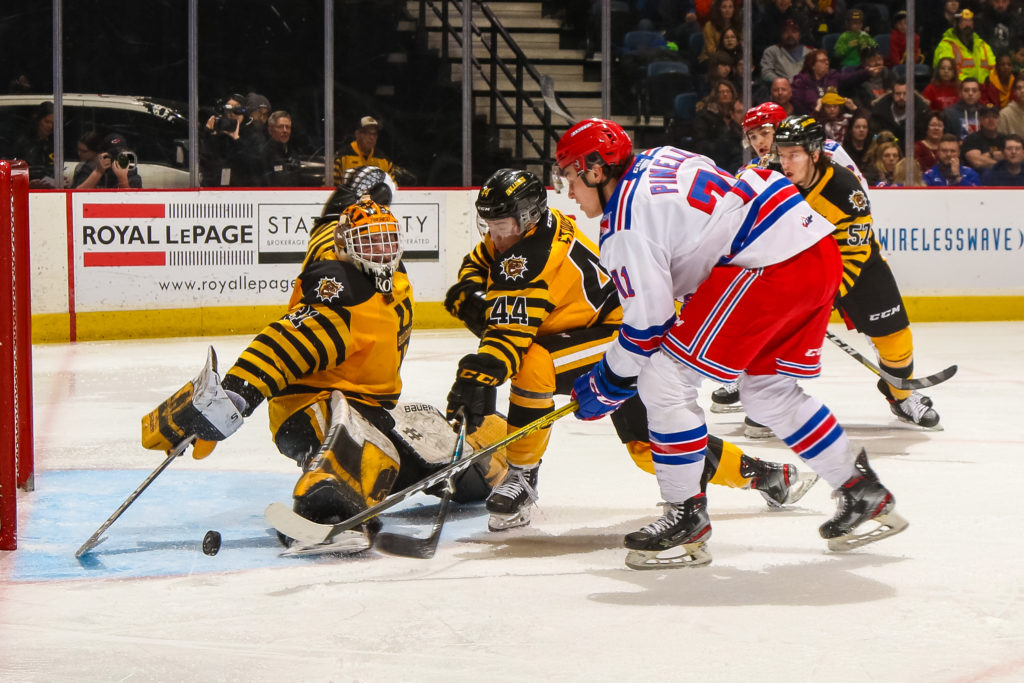 HAMILTON, ONTARIO. The Hamilton Bulldogs had a crowd of 7,302 for their annual Family Day Matinee and early on in the game looked like they would send their fans home smiling as Tag Bertuzzi would record 4 points & Arthur Kaliyev 3 points as the Dogs got out to a 6-2 lead but 2 goals and an assist from Liam Hawel, including a 3rd period shorthanded goal would lead the Rangers to a comeback victory.

The Bulldogs and the Rangers made things exciting for the fans celebrating Family Day right away. Just four minutes in, Logan Morrison scored a power play goal, his 22nd of the year assisted by Nathan Staios and Arthur Kaliyev to make it 1-0 for the Bulldogs. Following the early goal, the gloves dropped between Bulldogs captain Isaac Nurse and Kitchener’s Axel Bergkvist to spark some fire under the players skates. Arber Xhekaj would respond for the Rangers, scoring Kitchener’s first goal of the game, tying the score at 1-1. The score would only remain tied for about 30 seconds until Tag Bertuzzi intercepted a pass in the Rangers end, dipped and dangled around the defense and scored a top corner goal over Lucas Pfeil’s shoulder, his 21st of the season. Following Bertuzzi’s unassisted goal was Arthur Kaliyev’s 40th of the season, a milestone he reached for the 2nd straight season, with an assist from Tag Bertuzzi. The Bulldogs would keep the momentum with another goal from Bertuzzi, his 2nd of the game and 22nd of the season, with an assist from Jan Mysak at 16:29 to stake the Dogs to a 4-1 lead. Declan McDonnell of Rangers would score their second goal of the frame to finish the period off with a score of 4-2 in favour of the Bulldogs.

The Bulldogs kept their lead into the second and would widen the goal gap to three, finishing the second period with a score of 6-3. Scoring for the Bulldogs would be captain Isaac Nurse at 4:11, off a tremendous individual effort by Kade Landry along with Liam Van Loon, and Arthur Kaliyev recording his 2nd of the game & 41st of the season, with assists from Staios and Bertuzzi, Bertuzzi’s fourth point of the game. Thanks to the terrific efforts of Zachary Roy, with 24 saves through 40 minutes, only one goal was allowed by the Rangers this period. Scoring the goal for the Ranger’s was Francesco Pinelli, his 16th of the season. As the game headed into the third period, the Bulldogs had the man advantage and a chance to take down one of the best in the west.

An upsetting period for the Bulldogs would turn nightmarish as the Kitchener Rangers would mount a comeback. The Rangers’ goalie Jacob Ingham had his team confident in the third period as he would shut the door in the Kitchener goal and give his team the opportunity to get back in the game. Serron Noel began the comeback at 11:35, scoring a shorthanded breakaway goal off a neutral zone turnover by the Bulldogs, shortly thereafter Liam Hawel would steal the puck from Bulldogs’ goaltender Zachary Roy and deposit his 17th of the season, shorthanded at 12:08 to make it 6-5. Kitchener would tie the game on the power-play at 14:02 as Liam Hawel struck again, his 2nd of the game & 18th of the season before Riley Damiani would complete the Rangers comeback scoring his 24th of the season at 16:07 to give the Rangers a 7-6 lead that would be insurmountable for the Bulldogs late, earning Kitchener the comeback victory.

The Hamilton Bulldogs will return to action on Thursday February 20th, travelling to Peterborough to take on the Petes at 7:00pm before returning home to host the Oshawa Generals on Saturday, February 22nd at 4:00pm.