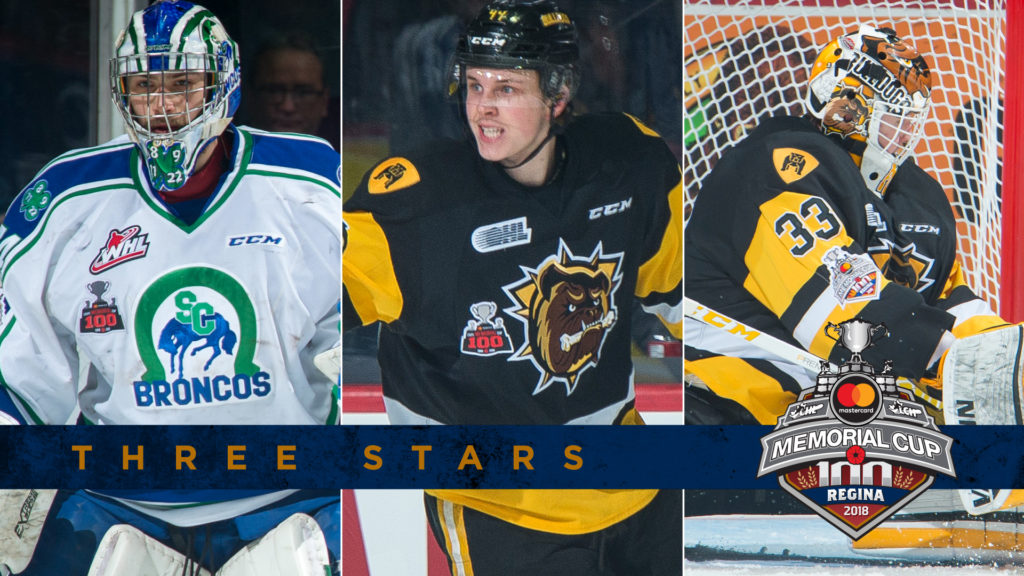 The Hamilton Bulldogs found a way to break past Stuart Skinner and into the win column at the 2018 Mastercard Memorial Cup, earning a hard-fought 2-1 victory over the Swift Current Broncos on Monday night.

The Bulldogs showed why they are the Ontario Hockey League’s best, putting forth a dominant performance that was nearly thwarted by Skinner, a prospect of the Edmonton Oilers.

The 19-year-old prospect of the Detroit Red Wings took care of his cage Monday night, backstopping the Bulldogs to their first win of the tournament. A product of Brigden, ON, Fulcher remained focused after facing only four shots in the first period, turning aside 10 of the 11 sent his way during the middle period, including a point-blank opportunity off the stick of Broncos captain Glenn Gawdin. Fulcher then kicked out another seven attempts from the Broncos during the third period. Through two games at the Mastercard Memorial Cup, Fulcher is 1-1 with an admirable 2.01 goals-against average and .923 save percentage.

The 18-year-old prospect of the Arizona Coyotes kick-started the Bulldogs offense Monday night, registering a power-play goal 5:49 into the proceedings. During the third period, the product of Georgetown, ON won puck battle after puck battle, generating opportunities for his teammates in search of the decisive marker. By the end of the night, Entwistle notched the lone goal, an even rating and six shots on goal.

The 19-year-old prospect of the Edmonton Oilers was the best player on the ice Monday night, turning aside an astounding 54 shots in a losing effort. Despite the final outcome, no one can point a finger at Skinner, who steered aside quality chance after quality chance from the Bulldogs. Early in the second period, the product of Edmonton, AB robbed Isaac Nurse with a glove on a breakaway. Midway through the third period, Skinner was sharp in swallowing up two separate quality opportunities off the stick of Robert Thomas from the slot. When the buzzer sounded, Skinner had turned aside 54 of 56 shots sent his way, the most since Belleville’s Mike Murphy stopped 54 shots during the 2008 Mastercard Memorial Cup in Kitchener.