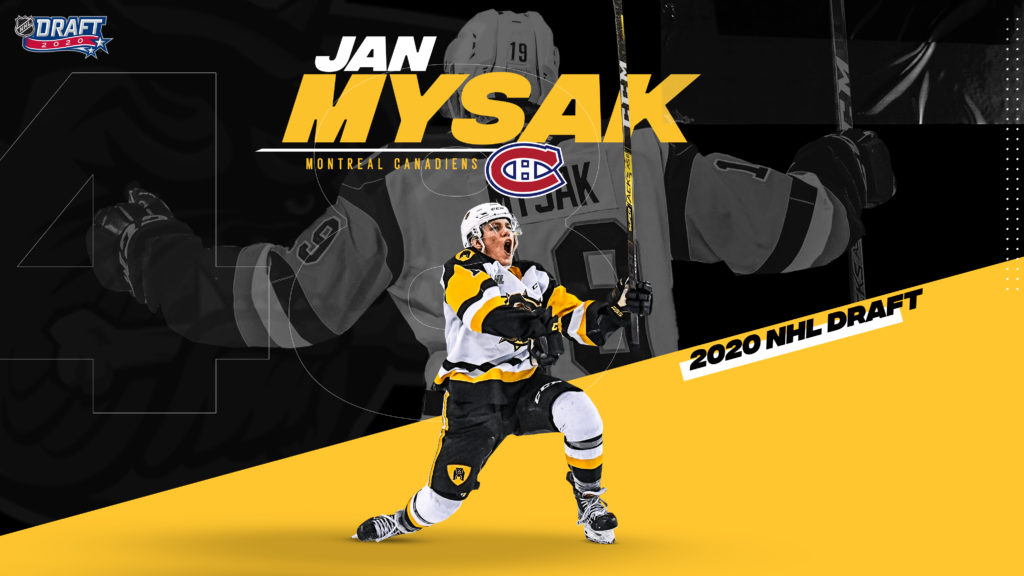 In an NHL Draft unlike any other, Hamilton Bulldogs star forward Jan Mysak was selected with the 48th overall pick by the Montreal Canadiens, joining an organization that is amongst the most storied in all of professional sports.

Coming to the Hamilton Bulldogs in January 2020, Mysak had already compiled an incredible resume with HC Litvinov in the Czech Republic, having passed the legendary Ivan Hlinka & childhood idol Jiri Slegr as the youngest player in team history as well as becoming the youngest captain in Extraliga history in the same season.

Mysak hit the ground running with the Hamilton Bulldogs, scoring his 1st goal in just his second game after arriving and dazzling Hamilton fans with a pair of hat-tricks against Niagara & Sault Ste. Marie just 14 days apart. Mysak would end the season playing on a line with Tag Bertuzzi and fellow NHL draftee Arthur Kaliyev that really found its stride, leading to Mysak recording 25 points in just 22 games since arriving.

As we continue with the lead up for the 2020 #NHLDraft enjoy The Best of Jan Mysak!#JanMysakWeek pic.twitter.com/OskFErpAFz

When asked about his draft experience & selection to Montreal, Jan Mysak was quoted: “I’m very happy that it’s over for me and that it’s Montreal, a club with a huge history. I can’t wait to go there and show what I can do.”.

Mysak goes to an organization well acquainted with the Hamilton Bulldogs, thanks to a successful run when the franchise was affiliated with Montreal in the AHL and helped to develop current stars Brendan Gallagher & Carey Price. Since that time Montreal has also stocked the cabinets with talent and adding Jan Mysak to a pool of young talent that includes former OHL Champion Nick Suzuki & 1st round picks Jesperi Kotkaniemi & Ryan Poehling, there will certainly be an opportunity for the Bulldogs star to learn and excel with talent around him.

Montreal Canadiens Assistant General Manager Trevor Timmins was glowing in his praise of Jan Mysak: “We’re excited to get Jan Mysak. We wanted to add some speed and skill, and he addresses that need, obviously. He plays for the Hamilton Bulldogs, who we have close ties with. This is a player who played at the Under-20 World Juniors for the Czech Republic. He played mostly on the wing there. A player of his age – 17 years old – playing at the World Juniors and doing what he did is a pretty good indicator of a strong prospect that has a good chance to play at the NHL level someday, if you look back in history. We like what he brings: outstanding work ethic, energy, speed, quickness, skill, and willingness to learn and be coached. We were happy to get him.”.

The Hamilton Bulldogs organization is incredibly proud of Jan Mysak and congratulate him as he becomes the 2nd highest Bulldog selected in the NHL Entry Draft. We both look forward to seeing him back in Black & Gold and what he will do in the future wearing the historic bleu blanc et rouge.