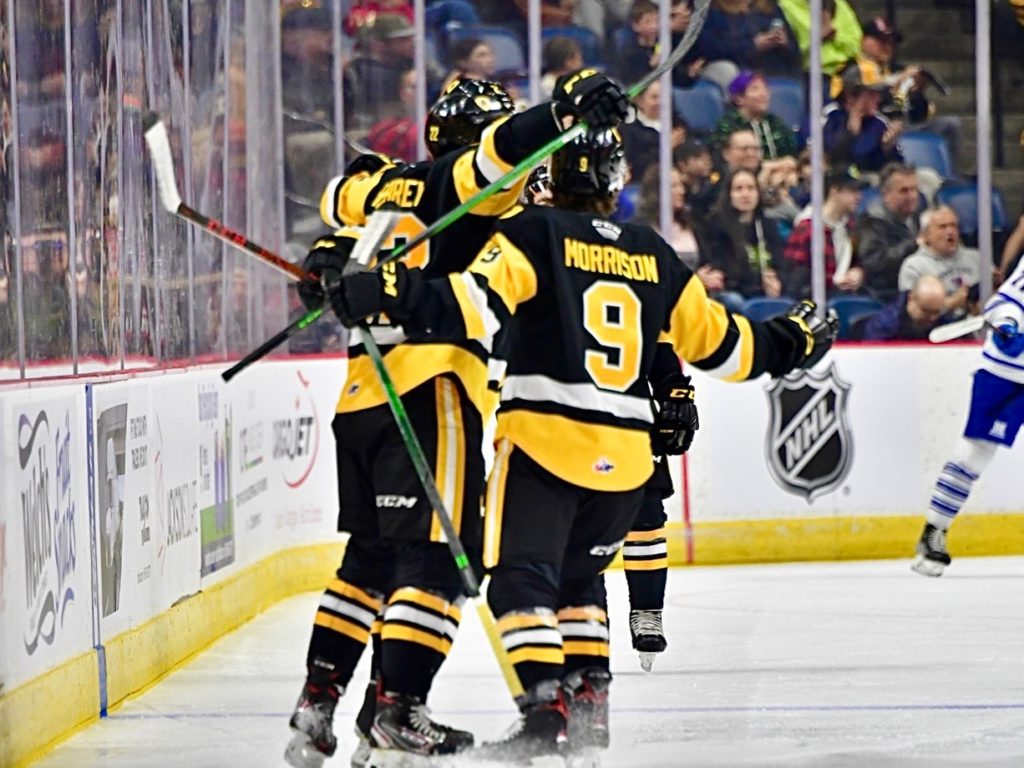 HAMILTON, ONTARIO. With a chance to hold home ice and take a 2-0 series lead the Hamilton Bulldogs returned to FirstOntario Centre Ice on Sunday afternoon for Game 2. Coming off a well calculated victory Thursday night the Bulldogs faced one additional hiccup in their line-up, missing defensemen Arber Xhekaj due to a one game suspension.

While Hamilton was missing Xhekaj & Avery Hayes due to suspensions, the Steelheads were dealt a blow before the puck dropped with starting goaltender Roman Basran picking up an injury in warm-ups and pressing backup Joe Ranger into the crease. George Diaco orchestrated the offense for the Bulldogs opening salvo as Logan Morrison bumped him the puck onf the right side of neutral ice, Diaco strode into the Steelheads zone, taking two defenders and found Ryan Humphrey open in the slot to beat Ranger 5-hole, putting the Bulldogs up 1-0 on his 2nd of the playoffs at 3:52. With Hamilton on the penalty kill at 8:29 Aidan Prueter evened the score for the Steelheads tipping the puck passed Marco Costantini for his 2nd goal of the playoffs. With 4 minutes left of the period the Bulldogs went to the man-advantage striking on a little tic-tac-goal action starting from the blue line where Mason McTavish found a wide-open Morrison at the top of the left circle and played it right back to a waiting McTavish at the bottom of the right circle to rip it past Ranger to put the Bulldogs up 2-1, which held up to the first intermission with Hamilton outshooting Mississauga 11-7 through 20 minutes.

The Bulldogs looked to press their momentum on an early second period powerplay with Morrison ripping one at Ranger who let off a juicy rebound to the front of the net but corralled it in a scramble to keep the game 1 goal apart. At 3:42 Mississauga tied it up once more with Luke Misa pushing one through the 5-hole of Costantini off the right circle for his 1st of the playoffs. With less than 11 minutes left Morrison came in hot down the slot looking to go top shelf on Ranger who came out his save of the night, a windmilling glove save, to keep the score at an even 2. With .19 seconds left of the second period Zander Veccia hit Ryan Winterton from behind resulting a 5-minute major for checking from behind and a game misconduct leaving the Bulldogs with 2 full minutes of 5-on-3 power-play time and an additional 3 minutes of major power-play time to start the third. Though the Bulldogs still held a 25-14 advantage in shots on goal, the score remained deadlocked 2-2 through 40 minutes.

Wasting no time in the final frame, Nathan Satios walked down from the blue line into the slot off the win of the draw from Morrison, elevating a rocket of a shot upstairs to put the Bulldogs up 3-1 on his 2nd goal of the playoffs. With a 1:28 left of the game and the Bulldogs without Jan Mysak & Mason McTavish momentarily, Marco Costantini made his save of the night keeping an eye on the puck through the scramble right on the doorstep to keep the score 3-2. With Joe Ranger on the Mississauge bench, the Bulldogs cleared the puck into the Steelheads zone, Logan Morrison pressured the puck forcing a turnover to Mason McTavish who played it off to Ryan Winterton and over to Morrison on the left for an empty net goal, his 8th of the playoffs and 4th point of the game to secure the Bulldogs Game 2 victory 4-2. With the sound of the final horn the Bulldogs take a 2-0 series lead on a second straight 4-2 win and hold home ice as the series shifts to Mississauga.

The Hamilton Bulldogs are headed down the QEW on Tuesday May 10th at 7:00 p.m. for Game 3 at the Paramount Fine Foods Centre in Mississauga.