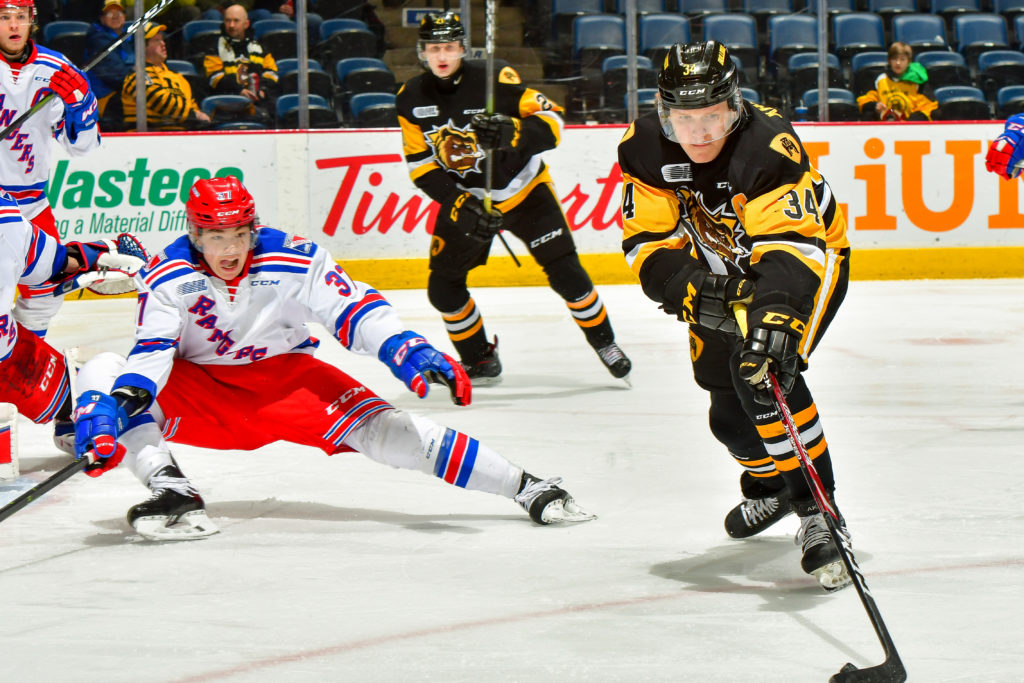 HAMILTON, ONTARIO. The pride of the Hamilton Bulldogs was tested in Kitchener, in a game the Rangers were running away with, the Bulldogs would see a late third period rally to show they wouldn’t go quietly. Loosing 9-6 but seeing the 1st OHL hat-trick for Logan Morrison, 1st OHL goal for Davis Young and three points from Arthur Kaliyev at least gave Hamilton some building blocks.

The Hamilton Bulldogs got the start they wanted in Kitchener, outshooting the Rangers 8-1 through the first few minutes of Friday night’s contest but it was the Bulldogs who would find themselves battling back despite the early advantages. At 8:30, an extended shift in the Hamilton zone would finish with Donovan Sebrango scoring his 2nd goal of the season from Michael Vukojevic & Francesco Pinelli to give the Rangers the 1-0 lead. Hamilton would respond in less than four minutes as with the team on the power-play, Logan Morrison would tip home an Arthur Kaliyev slap pass to tie the game at 1-1, with Jake Gravelle earning the secondary assist at 12:05. The Rangers would nose ahead once more as Zachary Roy would stop an initial Mike Petizian shot but the rebound would find Jesse Fishman in front of the Bulldogs’ goal to record his 3rd of the year at 16:35. The Bulldogs would respond before the first period was out as Logan Morrison blocked down a Rangers zone-clearing attempt, scoring his 13th of the season at 19:00 to send the game to the room tied 2-2 after 20.

The second period would see the Bulldogs pressure to take the lead but after the midway point became all Rangers. At 11:25 of the second frame Mike Petizian would be set up on a short-handed 2-on-1 for his 4th of the season to give Kitchener the lead once again. Reid Valade would extend the lead to 4-2 at 13:07 on his 11th of the year, as he would find a rebound that kicked off Nathan Staios and slide the puck under Zachary Roy. Finally at 19:32, Axel Bergkvist would deposit his 2nd of the season after Greg Meireles found the import defender at the right point with time and space to be able to walk in and give the Rangers the 5-2 lead through 40 minutes.

The third period was an avalanche of offense as the Rangers would open the period with four straight goals, first from Arber Xhekaj, his 1st of the season at 1:32, quickly followed by Declan McDonnell scoring his 6th of the season at 2:33 to extend the lead to 7-2. The Rangers would follow that up at 5:20 as Francesco Pinelli would record his 9th of the season ending Zachary Roy’s night. Jonathan Yantsis would welcome Marco Costantini to the game by scoring his 18th of the season at 7:04 giving the Rangers a 9-2 lead. The Bulldogs would dig deep however and show pride in the third as they’d rally for four of their own. Logan Morrison recorded his 14th of the season and 3rd of the night at 8:44, his first OHL hat-trick, with the assists going to Jake Gravelle and Nathan Staios on the power-play. Avery Hayes would follow that up at 11:08 take a long Arthur Kaliyev feed on a breakaway and scoring his 11th of the season, that would be followed at 14:03 as Arthur Kaliyev would record his 31st of the season, again on the power-play, with the assists coming from Jake Gravelle & Tag Bertuzzi. The night would finish off at 18:08 with Davis Young recording his 1st OHL goal from Lawson Sherk to pull the Bulldogs within three at 9-6 but that would be as close as they would get.

The Bulldogs are next in action finishing out the weekend at home, Saturday, December 14th for the beloved Teddy Bear & Toque Toss game, vs. the Kingston Frontenacs with puck drop at 4:00pm.