MUTTER & SUPRYKA COME UP BIG IN VICTORY OVER STORM 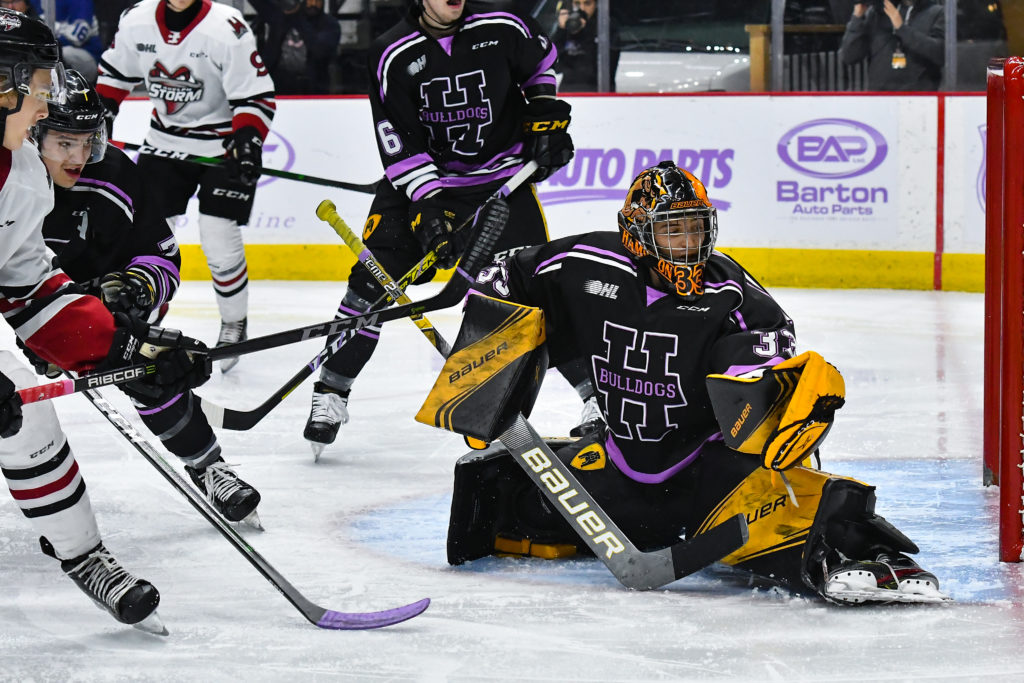 HAMILTON, ONTARIO. The defending OHL Champions from Guelph wouldn’t let it happen easily but two points each from Navrin Mutter, Cameron Supryka & Arthur Kaliyev along with 29 saves for Marco Costantini and three more in the shootout led the Bulldogs to sweep their Hockey Fights Cancer weekend.

The first period of the cross conference clash would see a feeling out process between two teams who only see each other twice over the course of the season and as the intensity began to rachet up, so did the goaltenders as Hamilton’s Marco Costantini & Guelph’s Nico Daws went back and forth, save for save for the majority of the first period. The Bulldogs began to turn momentum with solid shifts in the offensive zone and they would finally seize that momentum as the dynamic duo were at it again, Jan Jenik would find Arthur Kaliyev in the offensive zone who attempted a wrap-around that was walled off by Daws but Nathan Staios would fly in from the left point and beat Daws through a crowd and over his shoulder to give the Bulldogs a 1-0 lead at 13:46 which the team would take to the locker room after 20 minutes.

The back and forth feel of the game would continue in the second period with both teams trading offensive zone possessions and each taking the initiative from one another through the frame. Marco Costanini would make a brilliant breakaway stop on Pavel Gogolev but shortly after Guelph would get on the board. As Kade Landry was tied up with the Storm’s Keegan Stevenson in neutral ice, Eric Uba would carry along and rifle a shot alluding Costantini at 7:15 to tie the game. Hamilton would regain the lead late in the second period as Arthur Kaliyev would collect the puck in the right-wing corner and twirl it towards the front of the net, appearing to deflect off Navrin Mutter but official ruled as Kaliyev’s 28th of the season from Cameron Supryka & Jenik at 18:32 but the Bulldogs lead wouldn’t last. Just 40 seconds after Kaliyev’s goal, Cam Hillis won an offensive zone faceoff and Fedor Gordeev would rocket a shot moving to the middle of the ice to tie the game at two, which is how the game would head to the second intermission.

As the third period got underway the Bulldogs would apply the pressure and would see it pay off as Navrin Mutter would rocket a saucer pass across the front of the Guelph goal to a waiting Logan Morrison who bunted the puck into the back of the net at 5:47 to give the Bulldogs a 3-2 lead, Cameron Supryka would pick up his second assist of the night on the goal. For the third time in the game however Guelph would fight back, while shorthanded a puck on edge would get past Nathan Staios at the Guelph line and with no cover back Cam Hillis & Keegan Stevenson would race in on a 2-on-0, with Stevenson scoring to tie the game at 15:53 and sending the game to overtime.

The extra five minutes would solve nothing, the game would need a shootout and once again Tag Bertuzzi played hero for the Bulldogs, scoring the only goal with Marco Costantini stopping all three Storm shooters, giving the Bulldogs the 4-3 victory

The Hamilton Bulldogs return to action on Friday, November 29th when they welcome the Peterborough Petes back to First Ontario Centre, with puck drop at 7:00pm.