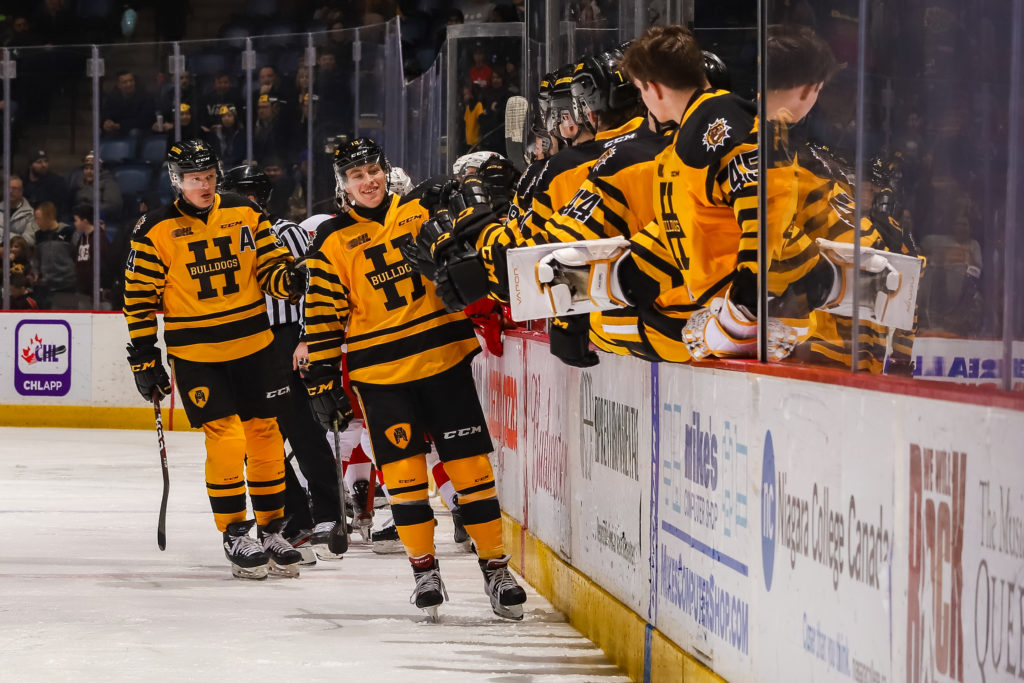 HAMILTON, ONTARIO. Jan Mysak recorded his second OHL hat-trick, and four points overall, in just 14 games in the Ontario Hockey League while Zachary Roy would deny 35 Greyhounds shots in a 5-2 Hamilton Bulldogs victory on Saturday afternoon. Arthur Kaliyev provided an additional goal and two assists while Bradey Johnson would keep the Bulldogs “grind line” red hot with another goal in the win.

The first period would be mainly one for the Bulldogs but opening up the game wasn’t quite what the team had hoped to follow up the win last night with as Cullen McLean would have a burst of speed past the Hamilton defense on the left wing and backhand the puck over Zachary Roy to give the Greyhounds a 1-0 lead just 2:46 into the game. From there the Bulldogs offense woke up, Jan Mysak dumped the puck into the offensive zone for Arthur Kaliyev to chase after and with Nick Malik coming out of the Greyhounds’ net to play the puck he would hit Kaliyev with the puck which would stop right in front of Jan Mysak who would fire it into the net to tie the game at 1-1 on his 10th of year starting Hamilton’s run. At 6:14, Liam Van Loon would fire the puck to the front of the net from the high slot, with Isaac Nurse screening Malik, Bradey Johnson would make his way through the crowd to find the puck and net the rebound for his 8th of the season giving Hamilton the 2-1 lead. The Bulldogs wouldn’t be done there as Zachary Roy would play the puck to Tag Bertuzzi working it along right wing boards to Jan Mysak who would drive off the right-wing side alluding the check of Billy Constantinou before dancing past Drew Wawrow and recording his 11th of the season at 9:46 giving the Bulldogs a 3-1 lead. Sault Ste. Marie would have an answer before the period was out a puck that would get stuck in the skates of Nathan Staios at the left point on the power-play would be poked loose by Tye Kartye who would race in on Zachary Roy and record his 20th of the season shorthanded to send the game to the first intermission with a 3-2 score.

The second period would see no scoring but belong to Zachary Roy who was tremendous in stopping all 14 shots he faced, bringing him up to 28 saves on 30 shots through 40 minutes for the game. It would be highlighted by a save on Rory Kerins in a two-on-one that would see Roy use an explosive right to left move across his crease to deny the opportunity. The Bulldogs best opportunity of the period would come with Isaac Nurse stealing the puck from Jaromir Pytlik before racing in on the Greyhounds’ goal only to be denied by Nick Malik sending the game to the third period still 3-2 for Hamilton.

For the second straight night the Hamilton Bulldogs would own the third period, as Arthur Kaliyev would bubble the Bulldogs lead back to two at 2:40 as Jake Gravelle would get the puck to Jan Mysak on the left-wing side setting the puck to the top of the right circle for Arthur Kaliyev to step into and record his 39th of the season in classic Kaliyev fashion. The scoring would be closed by Jan Mysak as Arthur Kaliyev would spring Mysak and Lawson Sherk on a 2-on-0 at 14:21 with Mysak scoring his 3rd of the game and 12th of the season for the hat-trick. Zachary Roy would finish the game stopping 35 of 37 in another tremendous performance giving the Bulldogs back to back wins.

The Hamilton Bulldogs will return to action at home to hosting the Sault Ste. Marie Greyhounds on Saturday, February 15th at 4:00pm before closing out a busy weekend hosting the Kitchener Rangers for the Family Day Matinee on Monday February 17th at 2:00pm.