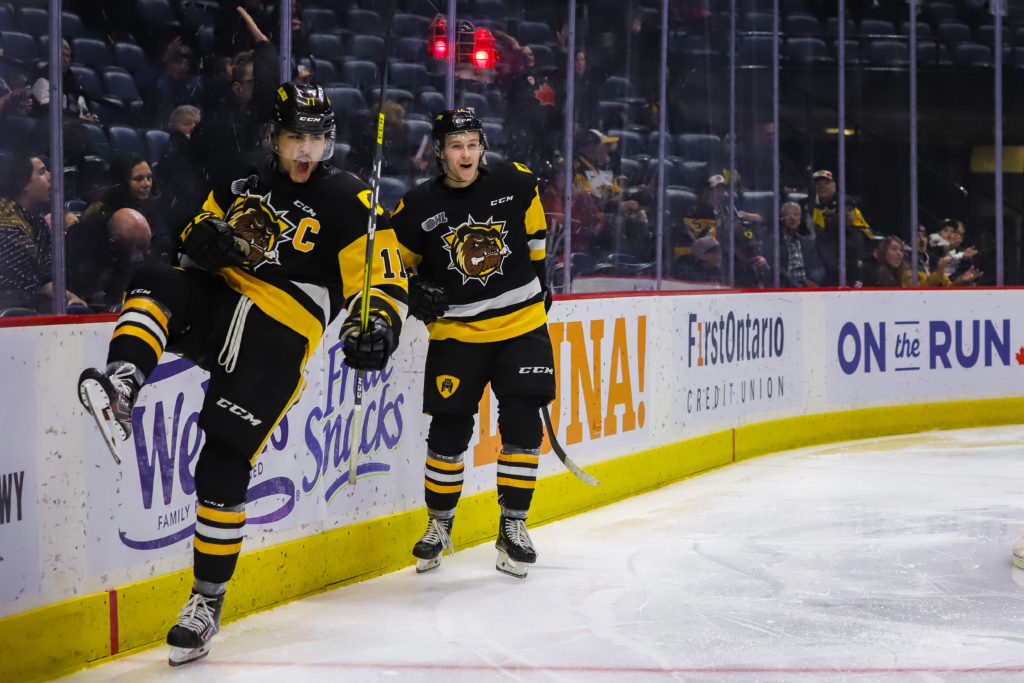 HAMILTON, ONTARIO. On an afternoon where the Hamilton Bulldogs handed out 1,000 Isaac Nurse bobbleheads to their fans, Nurse put on a show scoring his first career OHL hat-trick in an 8-2 drubbing of the Niagara Ice Dogs.

The pace of the first period was controlled by the Hamilton Bulldogs in their Sunday afternoon clash with the Niagara Ice Dogs and by the end of the opening frame the offense would get rolling. At 15:10, George Diaco would slow the play down cutting to the top of the right circle and feeding a charging Cameron Supryka, fresh off the bench, at the left point. Supryka would see Navrin Mutter posted at the top of the Niagara crease and bank the puck off the Bulldogs’ forward’s skate and past Josh Rosenzweig to give the Bulldogs a 1-0 lead on Mutter’s 4th of the year. The momentum was firmly in the Bulldogs hands as Isaac Nurse would take a feed from Liam Van Loon and from the bottom of the left-wing circle laser a shot over Rosenzweig’s shoulder for his 6th of the season giving the Bulldogs a 2-0 lead at 19:31. Just 20 seconds later, George Diaco would steal the puck on the right wing boards, cut to the middle of the ice and beat Rosenzweig for his 2nd of the year at 19:51 giving the Bulldogs a 3-0 through 20 minutes.

The second period was more of the same as the Bulldogs continued to pour on the offense even with Christian Sbaraglia stepping in to replace Josh Rosenzweig in the Niagara goal. Isaac Nurse was first to crack Sbaraglia, taking a Kade Landry feed on the right-wing boards and blistering a shot over the second Niagara goaltender of the afternoon at 7:17 for his 2nd of the night and 7th of the year. That goal would be closely followed by Jake Gravelle marking his 2nd of the of the season as Payton Vescio and Tag Bertuzzi combined to feed Gravelle at the left point with a seeing eye shot past Sbaraglia at 9:04. Just over three minutes later the Bulldogs offense struck again as Davis Young tipped in a Cameron Supryka point drive for his 2nd goal of the season at 12:29 giving the Bulldogs a 6-0 advantage. Niagara would get one back in the frame on the power-play as Jake Uberti’s initial shot rolled up the arm of Zachary Roy and Oliver Castleman was able to find the tumbling puck behind him at 16:49 to make it 6-1, where the game would eventually stand through 40 minutes.

It took just 22 seconds into the third period for Isaac Nurse to record his hat-trick, and 8th of the year as Bradey Johnson & Liam Van Loon combined to free up the Bulldogs captain, becoming the 5th different Bulldogs forward this year to record a hat-trick (joining Tag Bertuzzi, Avery Hayes, Arthur Kaliyev & Jan Jenik). Niagara would add one on a tremendous individual effort from Jake Uberti at 3:03 to draw the game to 7-2 but that’s as close as the Ice Dogs would get, as Michael Renwick would add on one more, a rocket from the right point at 14:01 for his 3rd of the year from Supryka & Bertuzzi to give the Bulldogs an 8-2 victory over their rivals from Niagara.

The Hamilton Bulldogs will return to action on Thursday, January 9th at the Meridian Centre in Niagara for a rematch with the Ice Dogs at 7pm before playing host to the Sarnia Sting on Saturday, January 11th at 4pm.