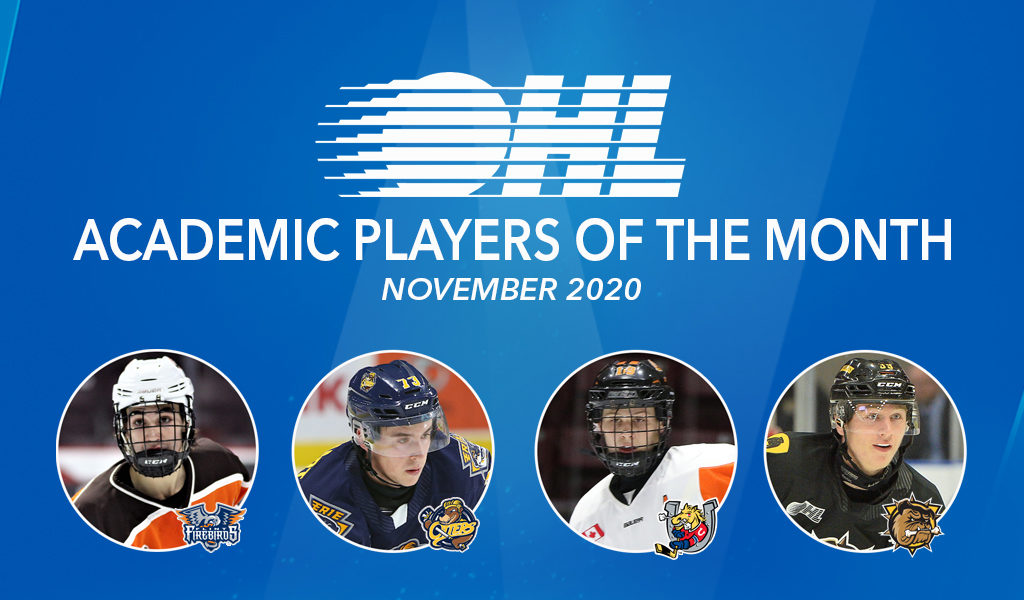 Toronto, Ont. – The Ontario Hockey League today announced that Lawson Sherk of the Hamilton Bulldogs, Hunter Haight of the Barrie Colts, Connor Lockhart of the Erie Otters and Gavin Hayes of the Flint Firebirds have been named the OHL Academic Players of the Month for November.

Though the puck has yet to drop on the 2020-21 OHL Regular Season, players are striving for excellence in the classroom through their studies. The League continues to work with government and public health agencies to prepare a safe return to play with a targeted Regular Season start date of Thursday, February 4, 2021. Academic players of the month are listed in correspondence with their 2019-20 divisions. Details concerning the structure of 2020-21 team alignment will be made available upon release of the OHL Regular Season schedule.

Here’s a closer look at the OHL’s Academic Players of the Month for November:

East Division: Lawson Sherk of the Hamilton Bulldogs is being recognized as November’s East Division Academic Player of the Month. He achieved 100% in Grade 12 University Level Advanced Functions; one of few Ancaster High School students to have ever achieved the perfect grade. Sherk also scored the top mark in Grade 12 University Level Physics with 94% and earned a 93% in his Personal Life Management course.

Sherk’s teachers and coaches regularly compliment his work ethic, positive attitude and kindness and point out his perseverance and teamwork both in the classroom and on the ice. He is known around school as a mentor and a leader.

Central Division: Barrie’s Hunter Haight is November’s Central Division Academic Player of the Month. Over his first term at Blyth Academy, he put up an impressive 98% in Grade 11 University Level Physics and 95% in Grade 12 Community Technology. Out of the 19 courses Haight has completed so far, he has yet to receive a grade lower than 90%.

Haight is described by his teachers as extremely focused and as someone who “continuously puts forth his best efforts both on and off the ice.” He was also recently recognized with the Emerging Leaders Award on account of his outstanding personal leadership, positive impact and contributions within the community.

Lockhart has been praised for fulfilling his course responsibilities at John McRae Secondary School and Blyth Academy before the start of the season so that he will have more time in his schedule for increased demands during his draft year. His ability to adapt to new ways of learning, time management, self-motivation and prioritization during this difficult time have also been praised, as well as his decision to front load his schedule to maximize his free time while maintaining his workouts and pre-season preparation.

West Division: Flint Firebirds rookie Gavin Hayes is the West Division’s Academic Player of the Month for November. Hayes earned an 88% in U.S. History, 84% in Grade 11 English and 83% in Algebra II at SOAR Academic Institute.

Drafted 16th overall by the Firebirds in the 2020 OHL Priority Selection, Hayes led the High-Performance Hockey League in goals (16) and points (33) over 21 appearances with the Detroit Compuware U15 AAA squad.

Players listed in correspondence with 2019-20 divisions. Details concerning the structure of 2020-21 team alignment will be made available upon release of the OHL Regular Season schedule.

A total of 334 graduates utilized their OHL Scholarship at post-secondary institutions across North America during the 2019-20 academic year, with a total contribution by teams of over $3 million.  Over the past 10 seasons, OHL Scholarship payments have totalled more than $25 million.