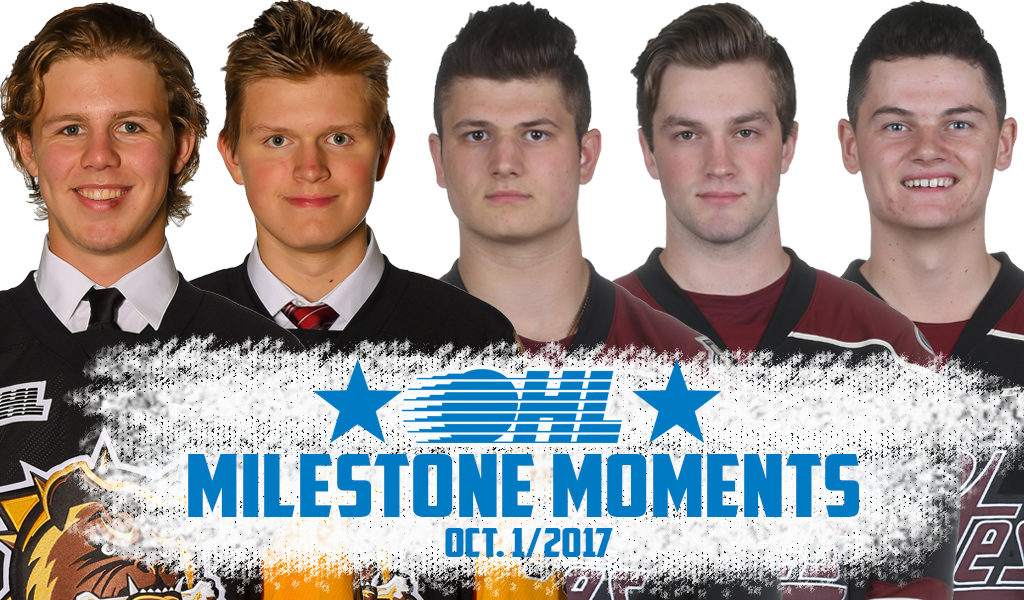 Add five players to the ranks of those to score first goals during the 2017-18 season. A pair of Hamilton Bulldogs found the back of the net for the first time while a trio of Peterborough Petes contributed to an eight goal output to close out the weekend on Sunday.

OWEN BURNELL (HAMILTON BULLDOGS):
Nineteen-year-old Owen Burnell has his first OHL goal, scoring off a nice feed from 16-year-old rookie Connor McMichael. Burnell camped out in just the right sot to lift a puck over the outstretched pad of Kingston’s Jeremy Helvig to give the Dogs a 3-2 lead. The Fronts would come back to win in a shootout, but the day will always be a memorable one for Burnell. The former seventh round pick of the Soo Greyhounds in 2014 committed to the Bulldogs this past summer after an impression season with the Jr. B Ancaster Avalanche.

ARTHUR KALIYEV (HAMILTON BULLDOGS):
Rookie winger Arthur Kaliyev’s first OHL goal was one for the highlight reel. The 16-year-old from Staten Island, NY teamed up with linemates Will Bitten and Matthew Strome to beat Kingston’s Jeremy Helvig from the slot with 4:20 remaining in the second period. Kaliyev finished the game with a goal and an assist, giving him three points (1-2–3) through his first four OHL contests. He was Hamilton’s second round (36th overall) pick in the 2017 OHL Priority Selection.

ADRIEN BERALDO (PETERBOROUGH PETES):
Seventeen-year-old Peterborough Petes defenceman Adrien Beraldo opened the scoring with the first of eight goals on Sunday as the Petes defeated the visiting Niagara IceDogs. Beraldo wristed a point shot over the glove of Niagara’s Colton Incze 6:47 into the first period to open the floodgates. The Stoney Creek, Ont. native found the back of the net in his fourth OHL contest. He was Peterborough’s fifth round pick in 2015.

BOBBY DOW (PETERBOROUGH PETES):
While Beraldo opened the scoring, Bobby Dow finished it off, scoring the eighth goal in an 8-4 Peterborough Petes victory. Dow scooped up a rebound off Declan Chisholm’s initial point shot and lifted it over Niagara’s Colton Incze with 5:46 remaining in the third period. The 18-year-old Ottawa native is in his first OHL season after being a 10th round pick by the Petes back in 2014.

MATT McNAMARA (PETERBOROUGH PETES):
Matt McNamara rounds out the Peterborough Petes’ trio of milestone markers from Sunday. The local product beat Niagara’s Colton Incze with a slap shot from the point to make the score 7-4 7:25 into the third period. The 17-year-old appeared in four games with the Petes last season after being the club’s sixth round pick in the 2016 OHL Priority Selection.