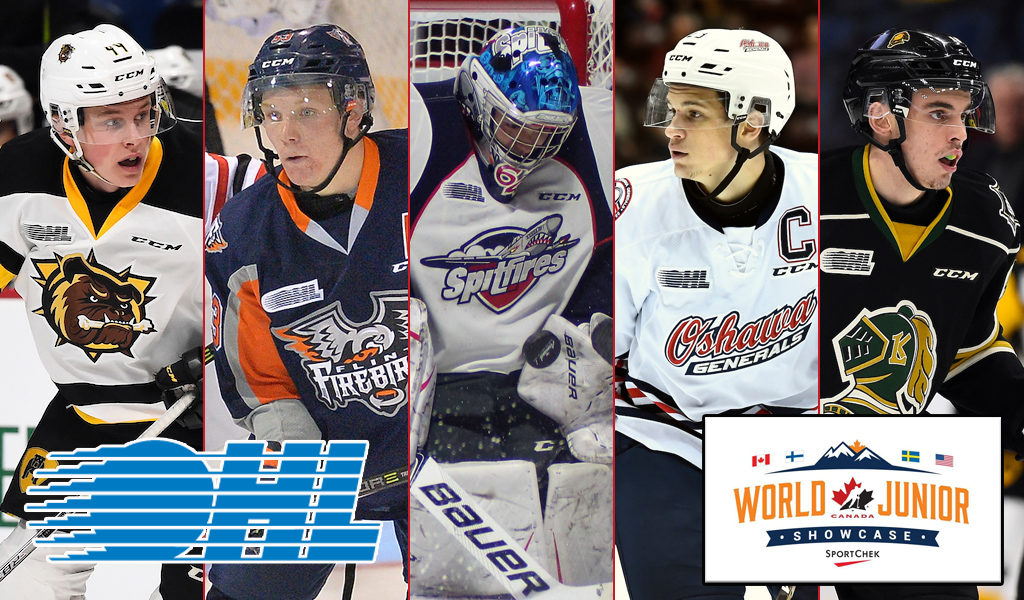 The road to the 2019 IIHF World Junior Championship in Vancouver and Victoria, British Columbia, this December began this past week in Kamloops at the 2018 World Junior Showcase featuring 40 of Canada’s National Junior Team hopefuls and an overall assembly of 47 Canadian Hockey League stars including 26 from the Ontario Hockey League.

Finland, Sweden, and the United States joined the host Canadians over the eight day event that included 11 showcase games.

After competing with split squads for the first two days, Canada and the United States met as single units on Saturday each holding wins over the Finns and the Swedes.  A spirited battle ended 6-5 in favour of Canada who wrapped up the showcase with three consecutive victories.

“Every time you put that Maple Leaf on, you want to be on the winning side of things, and represent your country well,” Oshawa Generals captain Jack Studnicka said post-game. “It was a physical game, both teams wanted to win, and it was fun to be a part of.”

Studnicka was Canada’s Player of the Game with a goal and an assist in the finale, a performance matched by Ty Dellandrea of the Flint Firebirds.

“It was a tight game, two competitive teams who have a bit of a rivalry, and it was a hard-fought game – competitive right to the buzzer,” noted the Dallas stars first round pick.

Sweden 3 vs United States Blue 1
Rickard Hugg (Kitchener Rangers) scored shorthanded at 17:28 of the third period to provide Sweden with insurance to claim their first win of the showcase.  This was the first test for the United States with a split squad that featured forward Sasha Chmelevski (Ottawa 67’s) and defenceman Alec Regula (London Knights) in action.
Game Summary

Driven by his disappointment from last year, and buoyed by an unexpected trip to #IIHFWorlds, @miketendy is ready for another chance at the #WorldJuniors. pic.twitter.com/tYjhTgGUCZ

Finland 4 vs Sweden 3 SO
Linus Nyman (Kingston Frontenacs) scored the game-tying goal then added one in the shootout lifting Finland to their first showcase victory.  Chicago Blackhawks prospect and future London Knight Adam Boqvist had one assist in the contest for Sweden.
Game Summary

United States 5 vs Sweden 4 OT
Rickard Hugg (Kitchener Rangers) scored 16 seconds into the contest and added his second at 3:02 to give Sweden an early 2-0 lead.  The United States battled back with Dallas Stars prospect Jason Robertson (Kingston Frontenacs) contributing a goal in the team’s first victory as a single unit at the summer showcase.
Game Summary

Morgan Frost is trying to make the most of the opportunity as he continues to battle for a spot on Canada’s #WorldJuniors roster.

United States 2 vs Finland 1
Kyle Keyser (Oshawa Generals) got the start for Team USA and stopped nine of the 10 shots he faced in first half action helping the red, white, and blue secure their second straight victory.  Just one day after announcing his commitment to the Sudbury Wolves, Buffalo Sabres prospect and third overall CHL Import Draft pick Ukko-Pekka Luukkonen made 29 saves on 31 shots for Finland.
Game Summary

Fastest lap of the day goes to… @MattVillalta31! ?

Canada 6 vs United States 5
Ty Dellandrea (Flint Firebirds) and Jack Studnicka (Oshawa Generals) had a goal and an assist each leading Canada to a third consecutive win to wrap up showcase action for the hosts.  Canada built a four-goal lead with additional singles from Nick Suzuki (Owen Sound Attack), Michael Rasmussen (Tri-City Americans) and MacKenzie Entwistle (Hamilton Bulldogs) before the Americans battled back to tie the game.  Pittsburgh Penguins prospect Calen Addison (Lethbridge Hurricanes) broke the 5-5 tie with his second goal of the showcase at 4:01 of the final frame.  Los Angeles Kings prospect Jaret Anderson-Dolan (Spokane Chiefs) provided two assists for Canada, while Liam Foudy (London Knights) picked up his fourth assist in three games.  For Team USA, Sasha Chmelevski (Ottawa 67’s), Joey Keane (Barrie Colts), and Jason Robertson (Kingston Frontenacs) all contributed single assists.  Matthew Welsh (Charlottetown Islanders) started for the Canadians and made 11 saves on 13 shots before giving way to Matthew Villalta (Soo Greyhounds) who made 23 saves on 26 shots in the game’s second half.
Game Summary

Sweden 5 vs Finland 3
The Swedes put a cap on summer showcase action in Kamloops with a 5-3 victory over Finland in a see-saw affair.  The teams traded goals and were even at 2-2 after 40 minutes before Sweden pulled ahead for good with a pair in the opening five minutes of the third.  Rickard Hugg (Kitchener Rangers) had one assist in the finale.
Game Summary

There’s one goal in mind for @miketendy and it’s to start for Canada. https://t.co/Agz1injj4t

With the eight-day summer showcase now complete, Brad McEwen, head scout for Hockey Canada, will continue to monitor and scout the Canadian camp attendees and other potential team candidates at the start of the 2018-19 season and at the CHL’s CIBC Canada-Russia Series to determine the invites to Canada’s National Junior Team selection camp in December. Following the selection camp, 22 players will wear the red-and-white looking for back-to-back gold medals when they REPRESENT Canada on home ice at the 2019 IIHF World Junior Championship from Dec. 26, 2018 to Jan. 5, 2019.

Fans from across all of Canada, and around the world, are gearing up to REPRESENT when the 2019 IIHF World Junior Championship opens in Vancouver and Victoria on Dec. 26, 2018. The sale of full-event ticket packages have outpaced initial projections as the West Coast prepares to REPRESENT for the first time since 2006. Limited full-event ticket packages are available at HockeyCanada.ca/Tickets.

For more information on Hockey Canada, Canada’s National Junior Team, and the 2019 IIHF World Junior Championship, please visit HockeyCanada.ca, or follow along through social media on Facebook, and Twitter or #WorldJuniors.