OTHMANN & DURHAM EACH STRIKE TWICE IN FIREBIRDS WIN OVER HAMILTON 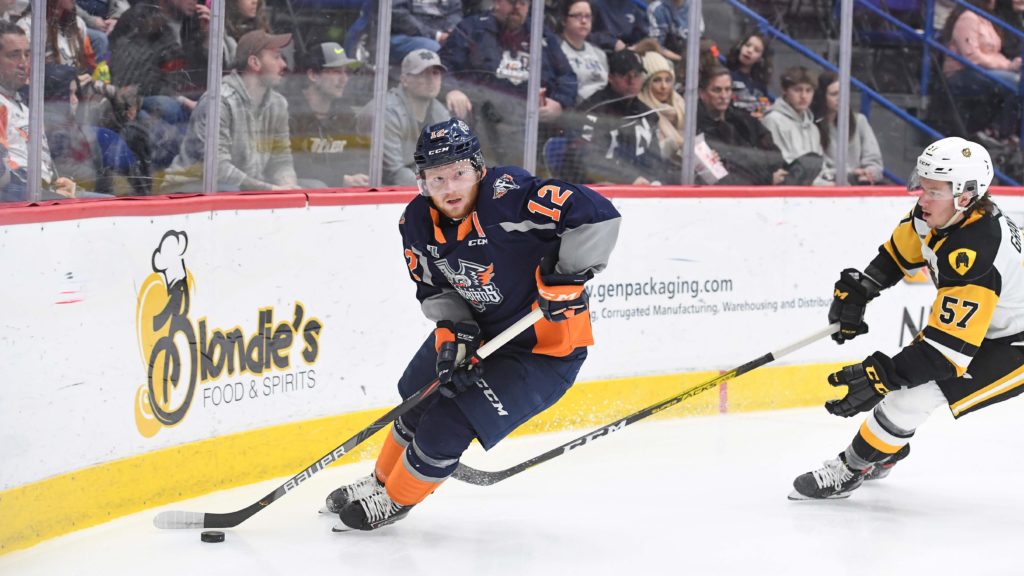 HAMILTON, ONTARIO. The Bulldogs would receive three point efforts from both Tag Bertuzzi & Arthur Kaliyev, as Kaliyev continues to close in on 100 points for the second straight season and Matt Strome’s all time team scoring record, but four straight Flint goals from the middle of the first through late second period would be too much to overcome on the road.

The first frame from Flint would see a pair of wild momentum swings as the Bulldogs would begin by opening an early lead, at 8:11 with Hamilton on the power-play Tag Bertuzzi would break the puck out of the Bulldogs’ zone and carry across the Flint line dropping at the top of the slot for Arthur Kaliyev who would collect and rip a bullet past Anthony Popovich to open the scoring on his 43rd of the season. Hamilton would extend the lead to two at 12:08 as Nathan Staios would take the puck at the left point, feeding the middle of the line where Isaac Nurse was stationed, Nurse’s shot would miss the short side but the bounce off the back boards would come to Ryan Humphrey who would ring his shot off the back crossbar collecting his 3rd of the season. At 13:22, Evgeniy Oksentyuk would start the momentum swing for the Firebirds as Cody Morgan would find him back door at the Hamilton goal to cut the Hamilton lead to 2-1. Before the period was out Jake Durham would strike on the power-play for the Firebirds at 19:21 from Owen Lalonde & Cody Morgan to tie the game 2-2, sending it to the locker room that way after 20 minutes.

Flint would have control early in the second period as they were able to turn the pressure into a lead as Brennan Othmann would station back door at 3:03 to record his 1st of the game and 16th of the year giving Flint a 3-2 advantage. Navrin Mutter would stand up for his team near the mid-way point of the period after a hit on Lawson Sherk from Tyler Tucker that the Bulldogs didn’t appreciate, Mutter and Tucker would have a spirited bout that Hamilton would look to feed off of but despite plenty of pressure Flint would extend the lead on the power-play. Brennan Othmann would record his 2nd of the game & 17th of the season from a rolling puck off a blocked Riley McCourt shot to give Flint the 4-2 advantage. Hamilton would strike back with just 27 seconds left in the period as Tag Bertuzzi and Arthur Kaliyev would cycle the puck back to Kade Landry at the point who would allude everyone finding the back of the net for his 4th of the year to cut the lead to 4-3. Before the period was out however a faceoff to the left of Marco Costantini would be knocked back to the right point where Tyler Tucker would fire and record his 17th of the season through a crowd to restore the 2 goal Firebirds’ lead into the second intermission.

Zachary would step between the pipes for the third period for the Bulldogs and give Hamilton a fighting chance to the end, stopping 11 of the 12 shots he faced. The one shot that would best Roy may have made it a bridge too far for the Bulldogs as Jake Durham would be sent in by Evgeni Oksentyuk and best the Hamilton netminder for his 2nd of the game and 22nd of the season at 3:20. The Bulldogs wouldn’t give up down 6-3 and sent 15 shots to Anthony Popovich’s goal in the final frame eventually resulting in Jan Mysak scoring his 14th of the season off a two-on-one with Arthur Kaliyev at 16:09, with Tag Bertuzzi picking up his 3rd assist on the goal as well, to close the game to 6-4 but that’s as close as the Bulldogs would get on the night.

The Hamilton Bulldogs will return to action in Michigan visiting Saginaw to take on the Spirit on Saturday, February 29th at 7:00pm.