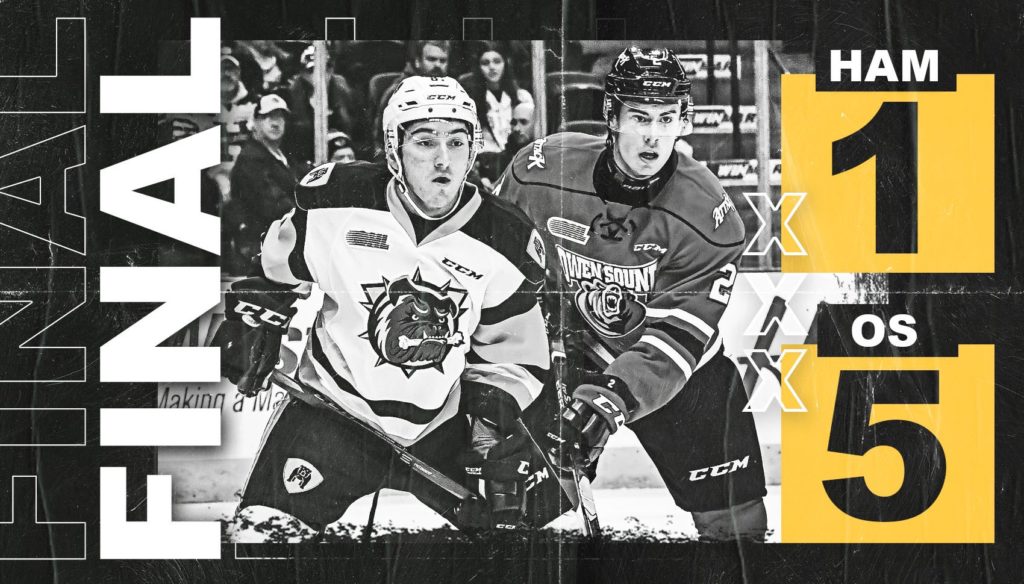 HAMILTON, ONTARIO. Zachary Roy was terrific in a relief appearance stopping 24 of the 25 shots he faced and Lawson Sherk scored his 3rd off a great feed from George Diaco giving the Bulldogs some building blocks to move forward with but four points on the night from Kaleb Pearson would make a big part of the difference as Owen Sound kept the Dogs’ guns silent for the majority of the night in a 5-1 win.

It wasn’t the start to the Wednesday night road contest that the Bulldogs would have wanted, despite killing an early Owen Sound power-play, the Attack would take momentum as Sergey Popov would strike at 9:20 collecting a pass on a short 2-on-1 from Barrett Kirwin and scoring his 16th of the year to take the 1-0 lead. Owen Sound would continue to stretch their advantage at 12:55 as Andrew Perrott & Sergey Popov would combine to get the puck forward to Kaleb Pearson inside the Bulldogs zone, with Pearson dragging into his stride at the top of the right-wing circle and picking the top left corner over the blocker of Marco Costantini to give the Attack a 2-0 lead. The Bulldogs would be able to build off their goaltender’s performance in the opening frame moving forward as Costantini would stop 15 of the 17 shots he faced giving his team a chance to get back into the game over the next 40 minutes.

The second period wouldn’t turn the momentum for the Bulldogs as despite a jump in the stride to start the period, the Attack would add on two more. Just 8 seconds into a power-play at 6:07 Carter Robertson would record his 9th of the year, on a triangle passing play from Pearson & Popov to make it a 3-0 Owen Sound lead before Kaleb Lawrence would record his 5th goal of the season pushing the puck past Marco Costantini at the post at 7:25 to make it 4-0. After the 4th goal on 22 Attack shots, the Bulldogs would replace Costantini with Zachary Roy who would come in and stop all 8 shots he faced to end the period but the Bulldogs were still in search of their first goal of the game as the 2nd period came to a close.

There was a jump to the Bulldogs step to open the third period as they poured 5 shots on goal in the first shift but a blocked shot from the blueline would lead to a Kaleb Pearson breakaway with a broken stick, missed by the officials, Pearson would pull the puck between his legs and score his 2nd of the game and 24th of the season to give the Attack a 5-0 lead at 1:12 of the third. The Bulldogs would break Guzda’s shutout attempt however, at 14:36, Navrin Mutter would free the puck up along the boards, feeding on to George Diaco who would navigate a couple stick checks through the slot and feed Lawson Sherk who was in turn able to chip the puck over Guzda and into the Owen Sound net for his 3rd of the season and the final goal of the game in a 5-1 Owen Sound win.

The Hamilton Bulldogs will return to action, travelling to St. Catharines on Friday, February 14th visiting the Niagara Ice Dogs at 7:00pm. The Bulldogs will then return home to host the Sault Ste. Marie Greyhounds on Saturday, February 15th at 4:00pm and close out a busy weekend hosting the Kitchener Rangers for the Family Day Matinee on Monday February 17th at 2:00pm.