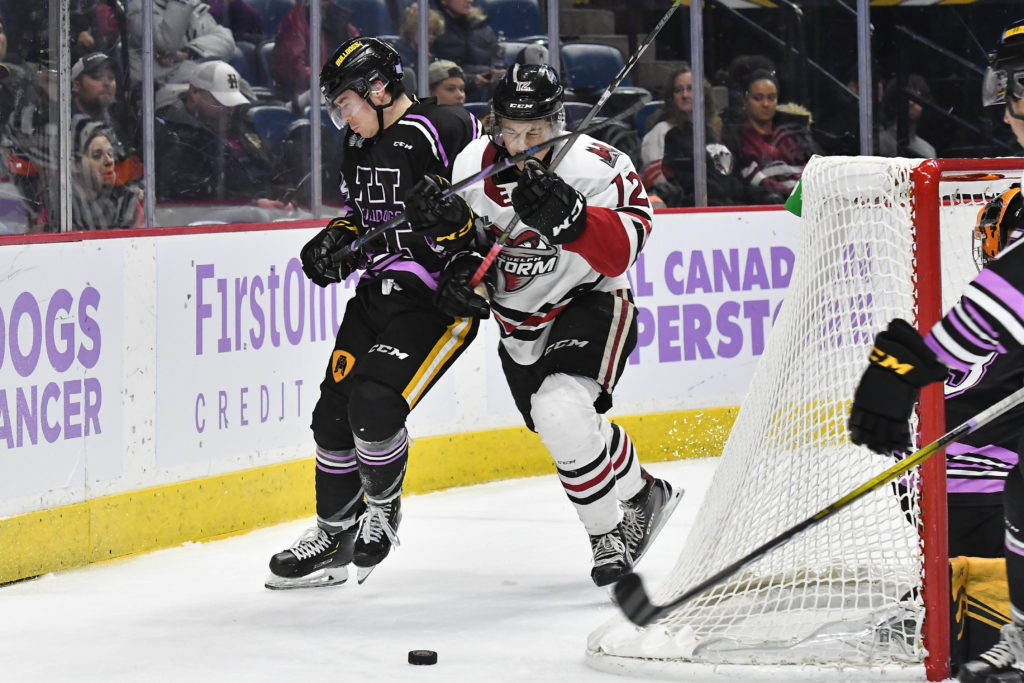 HAMILTON, ONTARIO. It was a hard fought effort that saw the Hamilton Bulldogs erase an early 3-0 deficit and Zachary Roy stop 22 shots in a tremendous relief effort as the hard-working ‘Dogs nearly pulled a point out of the top team in the Western Conference in the Guelph Storm.

It was a Storm of offense for Guelph to open the game on Sunday night as Eric Uba opened the scoring 3:44 into the first frame as the puck deflected off the leg of a Bulldogs defender and changed direction on Marco Costantini to give the Storm a 1-0 lead. Guelph would bubble the lead as Pavel Gogolev would take a bounce off the leg of another Hamilton defender right in the slot and beat Costantini stick side at 7:18 making it a 2-0 Storm advantage that would extend further at 13:37 as an impressive rush from Eric Uba would end with him scoring his 2nd of the night, making it a 3-0 lead and spelling the end of the night for Marco Costatnini as Zachary Roy would step into the game. The momentum would begin to turn as Roy entered the game making a show stopping glove save on Pavel Gogolev that boosted the Dogs. At 19:53, the Bulldogs would break through with the team on the power-play, Tag Bertuzzi would take the puck at the top of the formation from Jake Gravelle and feed Avery Hayes in the left-wing circle for a one-timer that beat Owen Bennett for Hayes 14th of the year making it 3-1 heading into the intermission.

The Bulldogs fed off the momentum of Hayes’ late first period goal as they started the second, just 0:52 into the frame Tag Bertuzzi would shelf his 17th of the season from Hayes & Nathan Staios to cut the Guelph lead to 3-2. Isaac Nurse would then hit the scoresheet again at 3:41 of the period, deflecting a Michael Renwick point drive through the legs of Owen Bennett to tie the game 3-3, giving Nurse goals in back to back games in his return. Nathan Staios would record the secondary assist on Nurse’s goal, giving him a pair of points to equal Avery Hayes & Tag Bertuzzi in the Bulldogs comeback effort. From that point on in the second period, Zachary Roy would take over making a series of tremendous saves to keep the game tied at 3-3 despite a strong push from the Guelph Storm and give the Bulldogs a chance to take at least a point from the game as they hit the locker room after 40 minutes.

The third period was a back and forth affair as the Bulldogs would outshoot the Storm 11-8 in the frame but Guelph would get the only goal at 13:11 as Cedric Ralph would find the puck out of a scramble in front of the Bulldogs goal to give the Storm a 4-3 lead that they would hold on to and pick up the victory despite Zachary Roy stopping 22 of 23 shots in relief.

The Hamilton Bulldogs will return to action on Tuesday, December 31st at FirstOntario Centre in a New Year’s Eve matchup with the Mississauga Steelheads at 4:00pm.