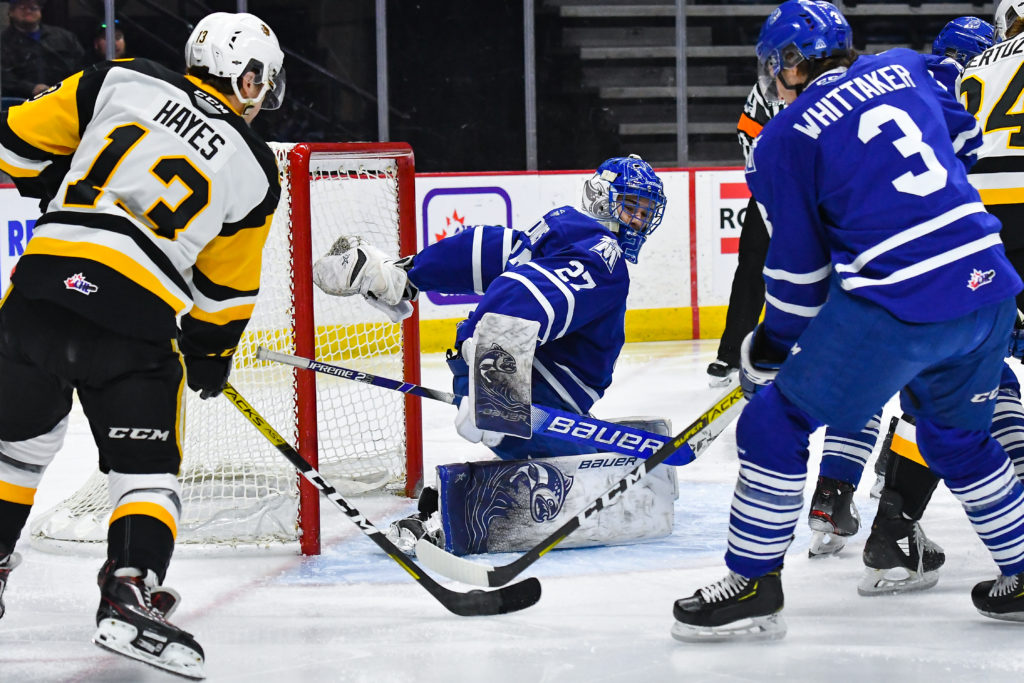 HAMILTON, ONTARIO. Cole Schwindt stole the headlines with a hat-trick in Tuesday afternoon’s contest, erasing a 41 save effort from Bulldogs goaltender Zachary Roy and pushing the Mississauga Steelheads to a 5-2 victory over the Hamilton Bulldogs. A three goal first period for Mississauga got Hamilton off on the wrong foot and the team was never able to find level ground again despite several high quality chances that had to be turned away by Kai Edmonds.

The Mississauga Steelheads got the jump on the Hamilton Bulldogs in the first period of the New Year’s Eve matchup opening the scoring at 3:20 as Cole Schwindt would find a puck bouncing off the back boards from a Charlie Callaghan point drive for his 15th of the season. Mississauga would double the lead on the power-play as James Hardie would sneak a shot between Zachary Roy & the post at 9:36 to give the Steelheads a 2-0 lead. Before the period was out with the Steelheads on a 4-on-3 power-play their man advantage unit would strike again, Thomas Harley would take a pass at the left point from Aidan Preuter and walk into the left circle firing a top corner shot for his 16th of the season and giving the Steelheads a 3-0 advantage which they would take to the locker room after 20.

The second period would see the Bulldogs begin to tilt the ice as they looked for the ice-breaker but Kai Edmonds would keep the door shut, holding his Steelheads up by three while they looked to turn the tide back in their favour. Mississauga would find that moment late in the second, just after a power-play proved fruitless, Cole Schwindt would take a pass from James Hardie and find space five-hole on Zachary Roy at 18:17 to give the Steelheads the 4-0 lead. The Hamilton Bulldogs would get a couple late chances, first Tag Bertuzzi would have a sure goal stolen by Kai Edmonds on a two-on-one with Avery Hayes. Following that chance Edmonds would make another tremendous skate save on Logan Morrison after Navrin Mutter got him the puck in the slot. On the back of those late saves, the Steelheads would take the 4-0 lead into the locker room after 40.

The Bulldogs would fight back in the third period beginning at 2:06 as Michael Renwick would put on a tremendous solo effort, striding from the right point, first hitting the outside of the post and then carrying the puck around the back of the net before tossing a shot over Kai Edmonds, it was Renwick’s 2nd of the year and made it a 4-1 game. At 13:06 the Bulldogs would get one closer, with Navrin Mutter cycling the puck to Liam Van Loon and founding an open Cameron Supryka at the left point who fired the puck through a Bradey Johnson screen to pull the Bulldogs back to 4-2. Despite a valiant effort to the end and 41 saves from Zachary Roy, Cole Schwindt would hit the empty net at 19:57 for his hat-trick, giving the Steelheads the 5-2 victory.

The Hamilton Bulldogs will return to action for back to back weekend home games, hosting the Kingston Frontenacs on Saturday, January 4th at 4:00pm before a visit from the Niagara Ice Dogs on Sunday, January 5th at 2:00pm.