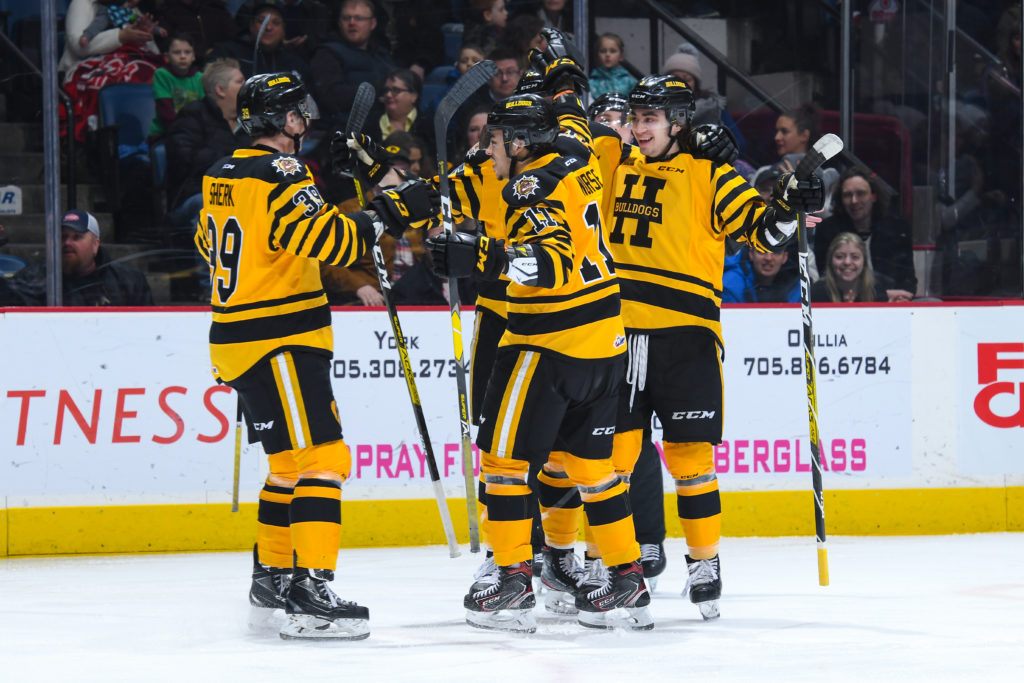 HAMILTON, ONTARIO. Isaac Nurse & Lawson Sherk led the way offensively for the Bulldogs on Sunday afternoon each compiling a pair of assists as the Bulldogs dropped the Petes by a 4-3 final. Marco Costantini’s 37 save performance assured the victory, while Jan Mysak earned his first goal on home ice, while Arthur Kaliyev got himself back on the board in one of the biggest momentum wins of the year for the team.

It was an impressive start to the game for the Hamilton Bulldogs against the Peterborough Petes, starting with some aggressive physical play from none other than Navrin Mutter who would score the first goal of the game at 4:20 on a triangle passing play from Isaac Nurse & Lawson Sherk. Some back and forth plays until the Peterborough Petes got a powerplay opportunity to try and tie the game, but it was the Bulldogs who would extend, as Jan Mysak who scored an unassisted short-handed goal with 11 seconds left in the penalty kill, making it 2-0 at 17:06. Following Mysak’s fourth goal as a Bulldog, was Arthur Kaliyev who broke his five-game goalless drought with his 32nd goal of the season to finish off the period with a 3-0 lead. With momentum on their side, the Bulldogs entered the second period with a three-goal lead along with an extra man advantage.

The second period would see the physical tempo turn up considerably, consisting of 20 total penalty minutes and one goal from Hamilton’s George Diaco at 11:55, his 4th of the season with assists from Lawson Sherk and Isaac Nurse. The second period would finish with a now 4-0 lead for the Bulldogs. The Petes stayed tough defensively but remained unable to get one past Marco Costantini who had 26 saves by the end of 40 minutes. The shots on net were dead even at 26-26 going into the third despite the score line with the Bulldogs looking to keep the lead while entering the third into on the penalty kill.

A goalless period for the Bulldogs allowed the Petes to tighten the final score to 4-3. Not going to allow four unanswered goals after three periods, the Petes came in fighting in the third. The Petes would get their rally started with Max Grondin scoring on a goalmouth scramble just before the five-minute mark of the third cutting the lead to 4-1. It would take until Nick Robertson, and Semyon Der-Arguchinstev would score back to back goals at 17:07 & 17:58 to really tighten up the run to the finish with the score 4-3. As blood boiled between the teams, aggression overcame the Petes and the Bulldogs were able to escort home a dramatic 4-3 final as Marco Costantini would record 37 saves in the victory.

The Hamilton Bulldogs will return to action on Friday, January 31st, as the team hosts its first ever Harry Potter Night at FirstOntario Centre, welcoming the Ottawa 67’s at 7:00pm. Following that the team will host the Niagara IceDogs in Round 5 of the K9Cup Series on Saturday, February 1st, at 4:00pm before closing out the weekend on the road in Oshawa to take on the Generals on Sunday, February 2nd at 2:05pm.