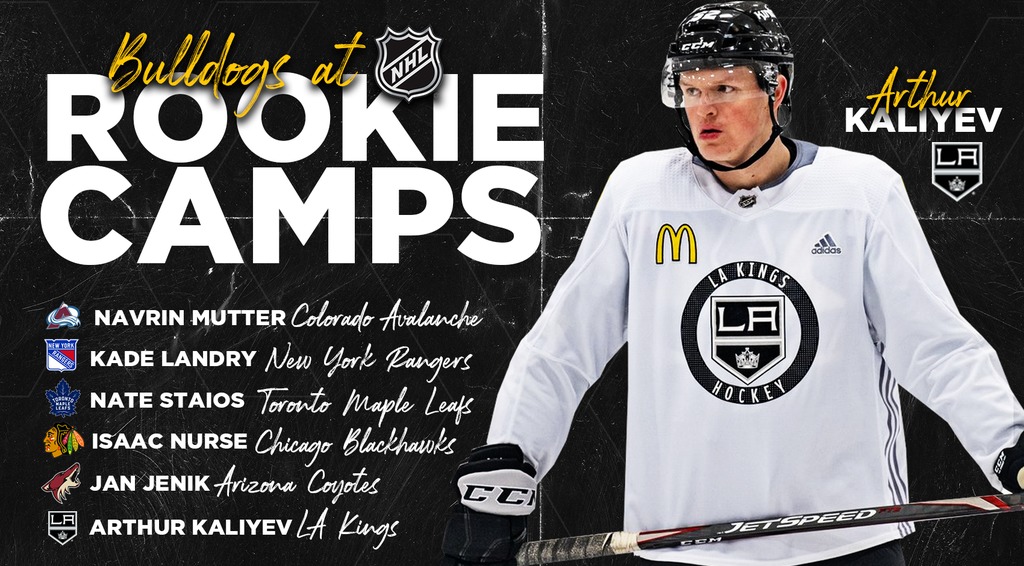 Heading into the 2019-2020 Ontario Hockey League season, the Hamilton Bulldogs are very proud to see six of our own head to NHL Rookie Camps. Jan Jenik (Arizona), Arthur Kaliyev (Los Angeles), Isaac Nurse (Chicago), Kade Landry (New York Rangers), Navrin Mutter (Colorado) as well as newest Bulldog Nathan Staios (Toronto) will all be showing off their skills at the highest level over the next few weeks.

Jan Jenik was selected by the Arizona Coyotes in the 3rd round, 65th overall in the 2018 NHL Entry Draft and joined the Hamilton Bulldogs midway through last season following a trade from Flint and committing from Liberec in the Czech Extraliga. Jenik, the product of Nymburk in the Czech Republic, had a breakout with the Bulldogs 30 points on 13 goals and 17 assists in 27 games which in large part helped him to sign his Entry Level Contract with the Coyotes organization.

Arthur Kaliyev was selected by the Los Angeles Kings in the 2nd round, 33rd overall in the 2019 NHL Entry Draft, making him the highest Hamilton Bulldog drafted to date. It was no surprise to see Kaliyev off the board early in the 2019 draft, following a record-setting season in Hamilton where he potted a franchise record 51 goals to go along with 51 assists in totalling a franchise record 102 points. The Staten Island, NY product was a member of the 2018 Hamilton Bulldogs OHL Championship team following a tremendous 31-goal rookie season and looks set to impress in Southern  California.

Isaac Nurse, a member of the Hamilton Bulldogs inaugural 2015 OHL Draft class and 2018 OHL Championship team, has accepted an invite to be a part of the Chicago Blackhawks rookie camp where he will join former Hamilton Bulldogs captain Mackenzie Entwistle. The hometown star, Nurse worked his way up from an original 11th selection to be an irreplaceable part of the Bulldogs organization. Nurse has been the Bulldogs iron man, appearing in all 68 games in each of the past two seasons scoring a total of 33 goals and adding 25 assists to along with his exceptional two-way game. Chicago will undoubtedly be impressed with the work ethic of this Bulldog leader.

Navrin Mutter, the Hamilton Bulldogs’ freight train on skates will be joining former teammate Brandon Saigeon when he heads to Colorado Avalanche rookie camp. The hulking winger and product of Lucan, Ontario was a 5th round selection of the team in the 2017 OHL Draft and immediately impressed playing the game with no fear as a rookie and becoming one of the most feared forecheckers across the OHL. Mutter, a member of the 2018 OHL Championship team, saw his playing time increase in the 2018-19 season and with it his confidence, he will be in for an even larger role in the coming season but will be looking to rattle the twine and the boards in the Mile High City before returning to the Bulldogs.

Kade Landry, last year’s Bulldogs team leader in points among defensemen with 6 goals and 45 assists for 51 points across 66 games will follow up his impressive offensive outburst with an invite to the New York Rangers rookie camp. Landry was acquired during the 2017-18 season and impressed in his 44 games with a Bulldogs team en route to winning their first OHL Championship, and followed that up becoming a leader of a team in transition in the 18-19 campaign. Landry now looks to impress in the Big Apple before putting it all together for his final season in the OHL.

Nathan Staios, the most recent addition to the Hamilton Bulldogs roster is coming off a very impressive sophomore 2018-19 season with the Windsor Spitfires which saw him more than double his offensive output as a rookie and earned him a rookie camp invite with the Toronto Maple Leafs. The Oakville, Ontario product, Staios has already impressed with his time in the OHL, his performance for Team Canada White as the World Under 17’s and his appearance at Bulldogs training camp and now looks poised to impress the Leafs brass before returning to man the blue line for the Bulldogs in the upcoming season.