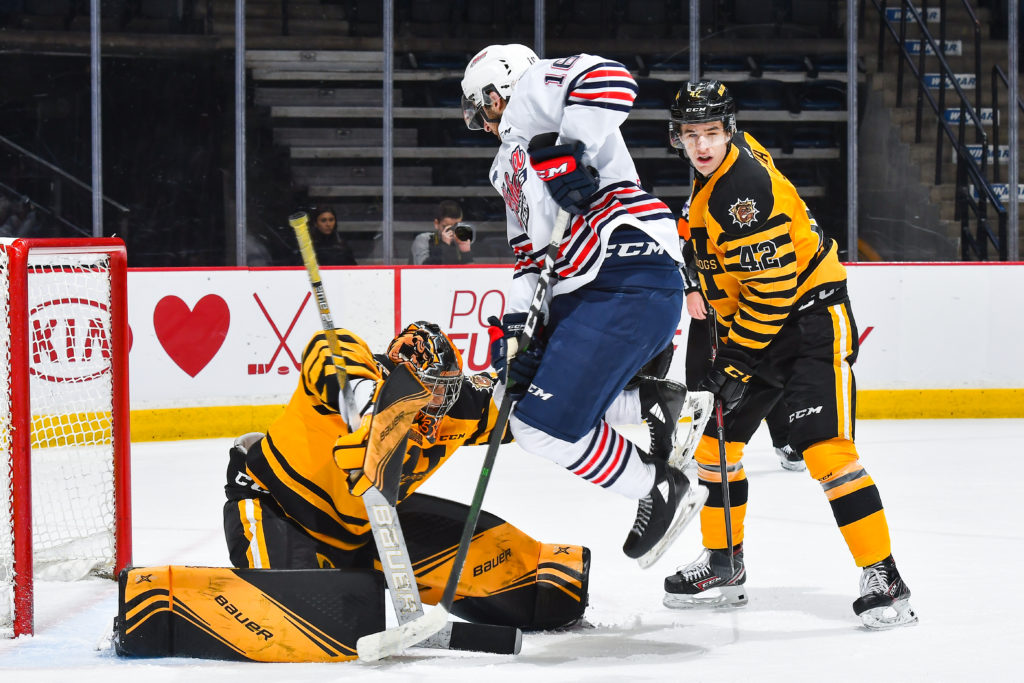 HAMILTON, ONTARIO. Arthur Kaliyev & Jan Mysak each recorded two points in an attempted comeback for the Bulldogs on Saturday afternoon but it was local product Ryan Stepien who would record the game winning goal an assist on another to down the Bulldogs by a 5-2 final.

It was a cautious start for both the Hamilton Bulldogs & Oshawa Generals on Saturday afternoon with both teams hunting two points in a division rivalry matchup. Marco Costantini would post 11 saves on 12 Oshawa shots while Arthur Kaliyev would have the best Bulldogs chance of the period on a turnover off the left-wing boards, firing a shot labelled for the top right corner but stolen by Zachary Paputsakis’ glove with the Generals goaltender stopping all 7 shots he faced in the opening period. The only goal would come on a power-play from a controversial bench penalty call after a Bulldogs icing. Just 15 seconds into the man advantage Kyle MacLean would record his 12th of the season giving the Generals a 1-0 lead into the first intermission.

Oshawa would bubble the lead to a pair just 59 seconds into the second period as Allan McShane would get the puck up the ice to Brett Neumann who would race in and beat Marco Costantini to give Oshawa the 2-0 lead on his 42nd of the season. Despite the Bulldogs battling back and coming close through Lawson Sherk & Kade Landry the Generals would extend the lead again as a Ryan Stepien shot would deflect off Bradey Johnson’s elbow and knuckle over Costantini’s blocker to give Stepien his 9th of the year and Oshawa a 3-0 lead. The Bulldogs would then begin to fight back, as Arthur Kaliyev would twist the puck across the offensive zone to Jan Mysak who was able to control it from his skate and play it across the net to Tag Bertuzzi, controlling back into his stride and lifting over Zachary Paputsakis to get the Bulldogs back into the game on his 23rd of the year at 15:11. That line would follow-up with more at 17:12 with Tag Bertuzzi trapping a Generals defenseman along the board and allowing Jan Mysak to race up the ice with Arthur Kaliyev, Mysak would feed Kaliyev across the Generals’ blueline and from the middle of the right circle, Kaliyev would rip a shot past Paputsakis for his 42nd of the year and closing the game to 3-2. Before the period was out however, Giovanni Vallati would work down the left-wing boards of the Bulldogs’ zone playing the puck out front for Phillip Tomasino to tap in his 39th goal of the season at 18:42 giving the Generals a 4-2 lead heading into the second intermission.

The Bulldogs would fight hard in the third period but Zachary Paputsakis would keep the door shut despite chances from Mysak, Kaliyev, Bertuzzi & Johnson. With Marco Costantini on the bench for the 6th attacker, the Bulldogs hemmed the Generals in their own zone but the game would put on ice at Mitchell Brewer would launch the puck out of his zone, striking the Hamilton goal at 19:42 assuring the Generals the 5-2 victory.

Bulldogsshop Jan Mysak
Show your support for #19
18 hours ago