STROME AND ENTWISTLE READY TO EXPERIENCE NHL DRAFT TOGETHER 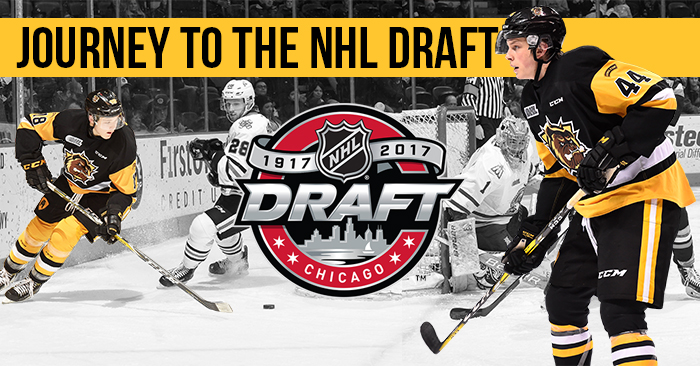 When you mention Matthew Strome and Mackenzie Entwistle, you can’t mention one without mentioning the other. Both Bulldogs forwards have been attached at the hip this season whether it was helping the team make the post season for the first time in franchise history, competing in the CHL Top Prospects Game or the 2017 IIHF U18 World Championship in Slovakia.

The two players hope to take the next step in their careers together during the 2017 NHL Entry Draft in Chicago June 23-24.

Strome finished the 2016-17 OHL season as the 33rd ranked North American Skater by NHL Central Scouting.  The 6’3” left-winger put up 34 goals and 28 assists, for 62 points in 66 games to lead the Bulldogs in scoring.  Strome was also ranked the 2nd Smartest Player in the Eastern Conference in the 2016-17 Coaches Poll.

Entwistle goes into the 2017 NHL Entry Draft ranked 44th on the North American Skaters list by NHL Central Scouting.  He had 12 goals and 13 assists, for 25 points in 54 games. The big right-winger added a goal and an assist in the CHL Top Prospects Game and was named the 2nd Best Penalty Killer in the OHL’s Eastern Conference Coaches Poll.  Entwistle finished his year by leading Canada in scoring with four goals and three assists at the 2017 IIHF U18 World Championship in Slovakia.

The Bulldogs’ dynamic duo have been teammates at every level in their young hockey careers including the early minor hockey days, the 2013-14 season with the Toronto Marlboros’ Bantam AAA and of course the last two seasons with the Hamilton Bulldogs.

It’s only fitting they go through the NHL Draft process together June 23-24 in Chicago.