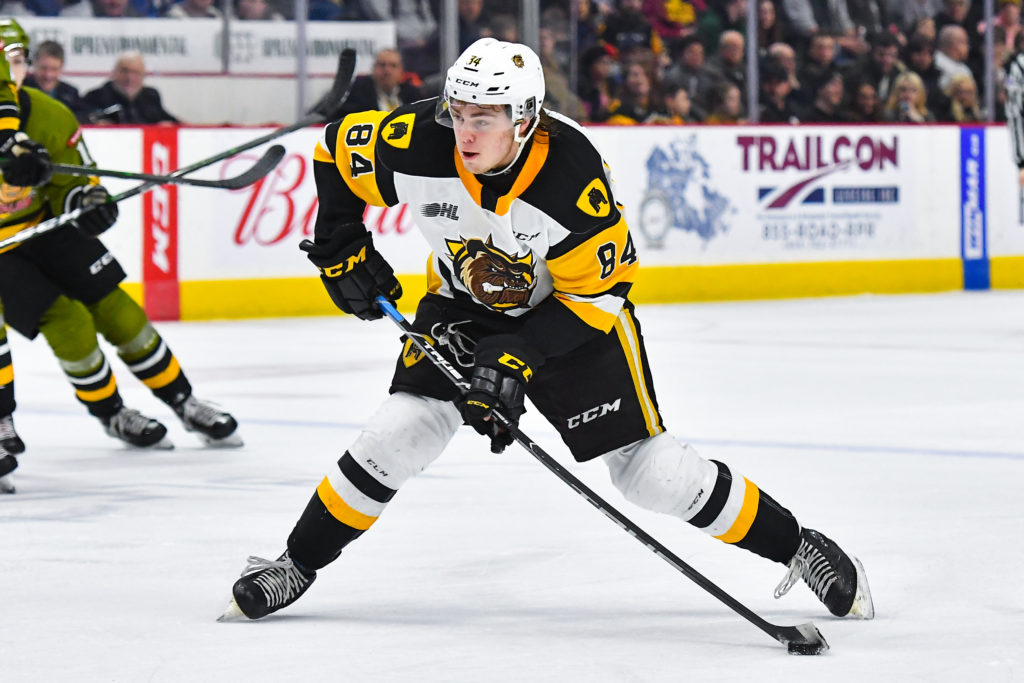 HAMILTON, ONTARIO. With Jan Jenik & Arthur Kaliyev away at the World Junior Hockey Championships and taking their combined 118 OHL points on the season with them, the Hamilton Bulldogs were looking for someone to step in the void. Tag Bertuzzi seized the opportunity to record his 2nd hat-trick of the year while captain Isaac Nurse returned with a goal and Liam Van Loon & Lawson Sherk each picked up a pair of points in a full team 5-1 victory over the North Bay Battalion.

The Hamilton Bulldogs got a picture perfect start to their first game coming out of the Christmas break as Tag Bertuzzi would post in front of the goal and knock a Nathan Staios rebound past Joel Vrebtic to give the Bulldogs a 1-0 lead just 2:15 into the game, Bertuzzi’s 14th of the season. The Bulldogs wouldn’t allow a shot against until just past the 12-minute mark as Zachary Roy would stop all 7 he would face in the opening frame. Before the period was out the Bulldogs would extend as Lawson Sherk would record his awaited 2nd of the year as he, much like Bertuzzi earlier, posted up at the goal and slammed home a rebound of a Jake Gravelle shot at 14:16 to give Hamilton a 2-0 lead the team would take to the locker room.

The second period was a back and forth between the two beginning with the only goal of the period as Kyle Jackson would capture the puck and from the bottom of the faceoff circle step towards the Bulldogs goal and put the puck over the glove of Zachary Roy and in the net at 2:00, Jackson’s 5th of the season. From there the teams would trade chances with Joe Vrbetic stealing what looked like sure goals from Avery Hayes & Tag Bertuzzi, while Zachary Roy would deny Liam Arnsby a breakaway and then splitting across the goal to deny Luke Moncada who was looking at an open net to keep the game a 2-1 Bulldogs advantage.

It was all Bulldogs in the final 20, at 2:07 the return of captain Isaac Nurse became a little more triumphant as he recorded his 3rd of the season by finding a loose puck in Joe Vrbetic’s crease after some hard work from Lawson Sherk & Ryan Winterton and lifting it over the sprawled Battalion goaltender giving the Bulldogs a 3-1 lead. The game would be sealed 16:50 with the Bulldogs on the power-play as Kade Landry moved the puck to Avery Hayes at the right circle who in turn would find a streaking Tag Bertuzzi down the slot to direct the puck in for his 2nd of the game, 15th of the season making it a 4-1 Bulldogs lead. Finally at 19:31 Liam Van Loon would win a board battle, freeing the puck to Bertuzzi in the slot who fired the puck over Vrbetic’s glove to record his 3rd of the night, 16th of the year and giving the Bulldogs a 5-1 victory, backstopped by 28 saves from Zachary Roy.

The Hamilton Bulldogs will return to action with a trip to Guelph’s Sleeman Centre to meet the Storm on Sunday, December 29th at 7:00 before returning home for a New Year’s Eve matchup with the Mississauga Steelheads at 4:00pm.